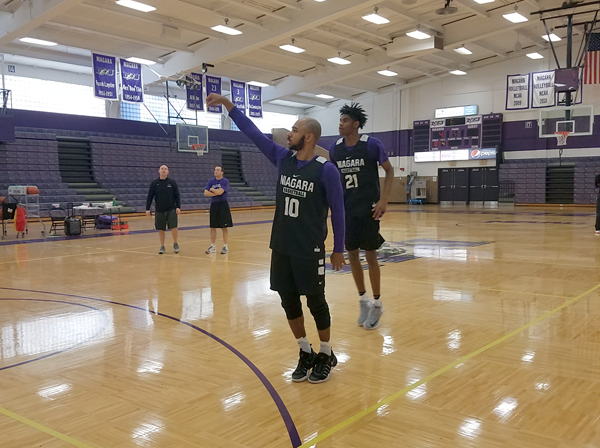 Kahlil Dukes watches his jump shot fly in practice as Niagara prepares to face their next opponent.

Kahlil Dukes and his long, winding road to Niagara

The path to success for Niagara University men's basketball player Kahlil Dukes has not been the easiest to come by. The redshirt junior has had an up and down college career that has taken him all across the country.

After sitting out last year due to NCAA transfer regulations, Dukes will look to showcase his talents for the Purple Eagles in ways he didn't have the opportunity to before.

Kahlil Dukes was born and raised in Hartford, Connecticut, where he attended Capital Prep Magnet School. During his time at Capital Prep, Dukes was an elite scorer, making an impact on his team all four years he played.

In his first five games of his varsity career, the freshman tallied up an impressive average of 32 points per game. He would go on to score more than 20 points in all but two the games that season.

The defining moment of Dukes' high school career, which proved just how skilled he was, occurred during his junior year.

On Dec. 11, 2011, Dukes and the rest of the Capital Prep team took on Classical Magnet high school, in Hartford. In the game, Dukes scored a career-high 51 points, including a crucial three-pointer with 2.7 seconds left to send the game into double-overtime.

Dukes finished out his high school career with his best statistical numbers. During his senior year, he averaged 23.9 points, with 3.9 assists and 3 steals per game, all while leading his team to a 22-4 record.

When all was said and done for Dukes in high school, he had accumulated 2,228 points, becoming only the 17th player in Connecticut high school history to score more than 2,000 points.

This prolific ability to score and lead his team to numerous state title appearances caught the eye of many college coaches.

Upon graduating high school, Dukes decided to take his talents across the coast to play at the University of Southern California. He had offers from schools such as Ohio University, Florida International, Drexel and more, but chose to attend USC based on its prestigious reputation.

However, before stepping foot onto campus at USC, Dukes was thrown a curveball when the entire coaching staff that recruited him to play at the university was let go.

The newly appointed coach, Andy Enfield, did not play Dukes nearly as much as the past coaching staff had promised.

During his first two years at USC, Dukes averaged only 6.8 minutes a game, scoring an average of 4.8 points per game.

The lack of playing time became frustrating for Dukes and put him in a position where he would have to make one of the toughest decisions of his playing career.

The lack of opportunity to get on the floor and play the game he loved ultimately drove Dukes to transfer.

"USC is a great institution, in a great city of Los Angeles" Dukes said. "However, the most important thing to me became playing the game I love, and I wasn't being given the best opportunity to do so."

"I asked for my release from USC so I could further my career elsewhere, where I would be given the best opportunity to play basketball" he added.

It wasn't long after Dukes asked for his release from USC that he was contacted by Niagara University men's basketball assistant coach Marc Rybczyk.

Rybczyk, who also hails from Connecticut, has known Dukes since he was just a freshman in high school. Dukes also played on an AAU team coached by a close friend of Rybczyk, so the personal connection between the two was already there.

"I stayed in contact with Kahlil, even after he signed with USC," Rybczyk said. "I knew that, with the coaching change that happened before he got there, there was a chance he would be available as a transfer. I knew that he would feel comfortable here and we would take good care of him"

Personal contact from coaches and creating a good relationship was a crucial piece of the puzzle for Dukes as he entered into the uncertainty of transferring schools.

This is where, Dukes said, the Niagara coaching staff excelled in recruiting him.

"My main concern going into my transfer-recruitment was my relationship with the head coach," he said. "And coach Casey was the only head coach I spoke to verbally about transferring and playing for him.

"I also know players, coaches and family friends who know coach Casey very well, and they told me great things about him."

It wasn't long after the coaches contacted Dukes that he was on campus and enrolled in the school.

What is the one downside to transferring schools in the NCAA? The year of ineligibility that follows known as the "Redshirt Year."

Dukes' year of ineligibility was not a year off, however. Even though he was not able to suit up for games, Dukes was able to practice every day with the team, and could freely workout in the gym afterhours.

He took full advantage of this free time to perfect his craft and improve upon areas of his game that needed work.

"During my redshirt year, I mainly focused on being a better vocal leader, getting stronger, faster, more explosive, and having different ways to finish shots around the basket," Dukes said. "I tried to work on every aspect of my game. ... I wanted to be able to do everything fairly well so that teams can't force me to do anything I couldn't do in the past."

Early indications this year are showing that all of the hard work done in the offseason and in the year of ineligibility is going to pay off.

Through the first three games of the Purple Eagles 2016-17 campaign, Dukes got off to a hot start, averaging 13.3 points per game, while playing 27.7 minutes per game.

Casey said he has been thoroughly impressed with Dukes' relentless work ethic and leadership skills.

"I've really liked Kahlil's work ethic since he's been with us," he said, "He's done everything we've asked him to work on. He's becoming a better one-on-one defender, and he's done an excellent job at creating his own shots."

"If he can continue to work on his game, I am confident he will continue to grow as a player" he added.

Purple Eagle fans are hoping Dukes can help the program secure its first winning season in three years. Whether or not Dukes is able to help accomplish this goal is yet to be seen. But one thing is certain: He is going to give it his all, and leave it all on the court.

Bryce Callen wrote this article as part of his CMS 120A communication studies course at Niagara University.