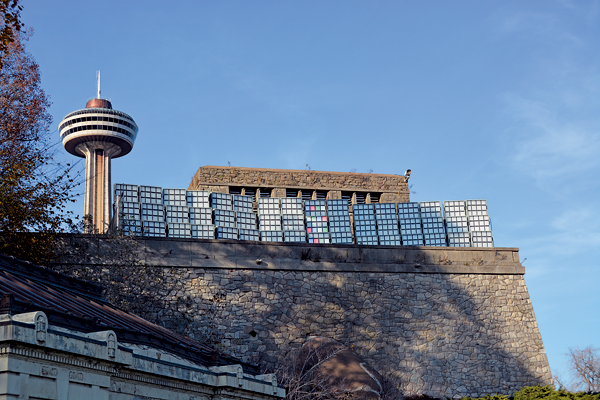 Shown are the new LED lights that have been installed at the Illumination Tower in Niagara Falls, Ontario. (Photos by Lauren Zaepfel)

Construction is nearly complete on the Niagara Falls Illumination Board's new LED lighting project, which will brighten up the falls more than ever before.

It's been 20 years since the last major investment in the falls' lighting infrastructure was made. The current $4 million revitalization project includes the replacement of Xenon lighting technology with updated LED lighting to enhance the view of both the Canadian Horseshoe and American Falls.

An official lighting ceremony will take place at 5 p.m. Thursday, Dec. 1, at Queen Victoria Place, 6345 Niagara Parkway, Niagara Falls, Ontario. The public is invited to attend the event and view the results of the new lighting.

The ceremony will begin with live music, followed by the official lighting of the falls at 6 p.m. A fireworks display will kick off at 6:25 p.m.

The overall goal of the project is to increase tourism, encouraging people to visit the falls more often and extend their stay, said David Adames, chief operating officer of the Niagara Parks Commission in Ontario.

"The goal is to attract visitors to see the falls at any time of the year, because the falls do look different whether it be summer, spring ... winter or fall," Adames said. "So, maybe they saw the falls during the day in the summer, maybe they want to come back in the fall or winter and see them at night."

"We know that people will generally stay a day or half a day, so we felt that lighting the falls at night is another reason to stick around," said Angela Berti, Niagara Falls Illumination Board member and marketing and public affairs representative with the New York State Office of Parks, Recreation and Historic Preservation.

With upgraded LED technology, the new lights will provide greater energy efficiency and reduce maintenance costs, as they are at least 47 percent more efficient than the previously used Xenon lighting, Adames said.

The upgraded lights include more than twice the current brightness levels of Xenon lighting. Not only will the new technology feature increased light intensity, it will also provide programmable lighting opportunities, a broader color spectrum and an "even color splash," Adames said.

"The Xenon lights technology, in an old search light format, you could almost see circles in certain areas of the falls, and there were some dark spots, some gaps in the lighting," he said. "But these new LED lights will actually cover the entire American Falls and Canadian Horseshoe Falls. They will get even light treatment."

He said the displays will be made up of natural colors. One example is a sunset display, using oranges, yellows and other colors that make up a sunset.

The lights will also be able to better shine through weather-related obstructions, Adames said.

"We're shooting light at some points 2,200 feet, and we have significant mist conditions at the falls," he said. "And every season is a bit different. Sometimes the winter conditions can be challenging, but there could be other nights where it's raining or it's foggy. ... So, we have some very challenging environmental issues to light through, and the LED technology is now there where we can light that distance, provide better intensity and provide an even light coverage. ... We want to bring that new lighting solution to this world icon."

Enhanced lighting was temporarily used to highlight the falls in recent years for high-profile events such as the Nik Wallenda high-wire walk and Red Bull "Crashed Ice Frozen Falls" climb.

"When (the falls) are lit with a little bit more of a dramatic light, they're really, really lovely," she said.

With the benefits of the new LED technology considered, the Niagara Falls Illumination Board moved forward with the enhancement project.

Thanks to financial support obtained from government and local tourism stakeholder groups on both sides of the border, the Niagara Falls Illumination Board was able to proceed with its revitalization plan.

"The Illumination Board is tremendously proud of the role it plays in the tourism industry in Niagara," said chairman Mark Thomas, New York State Parks Western District director. "We are very fortunate to have community stakeholders on both sides of the border who have supported our vision since the project was first proposed. The improvement to the nightly illumination of the falls will encourage visitation to Niagara, and we appreciate the stakeholders recognizing the importance of this project for the destination."