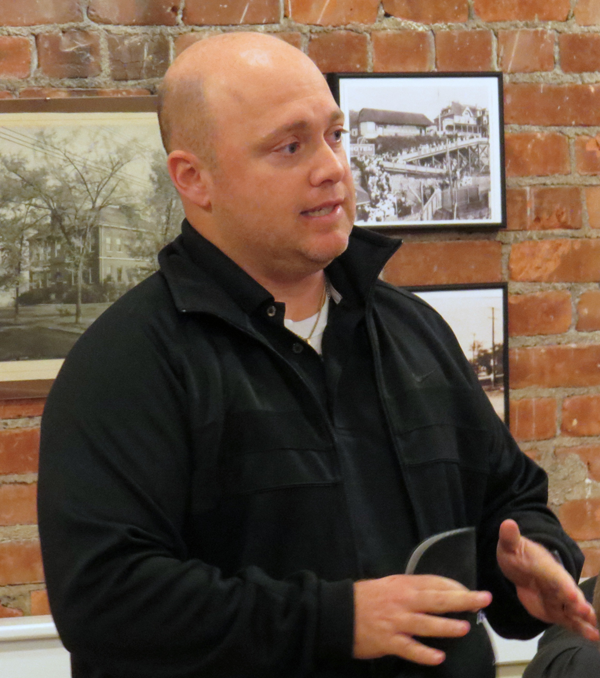 Town of Lewiston Parks and Recreation Director Michael Dashineau speaks to the Town Board and Village of Lewiston Board of Trustees during a joint municipal meeting on Monday.

Town of Lewiston moves toward adoption of final budget

As the drop-dead day nears for adoption of the Town of Lewiston's $16.820 million final budget for 2017, the Town Board spent the past week in discussions, first Monday with the Village of Lewiston Board of Trustees, and then on Wednesday, hearing from residents in a lightly attended public hearing at Town Hall.

Monday's joint meeting covered few topics, but one item went on to dominate discussion for much of the evening: the Lewiston Family Ice Rink. With word out of the town's announced plans to make the ice rink a go for the upcoming holiday season, Parks and Recreation Director Michael Dashineau accompanied Supervisor Steve Broderick and Town Board members to the Red Brick to discuss the matter further with village officials.

"We're ready to begin work on it," said Dashineau, informing the building of the rink would be getting underway this week at Academy Park. He said he felt comfortable with the numbers in the town's recreation budget to make it a reality.

"We have a lot of expected revenues listed in our budget, which has always been a problem for us if they don't match," Dashineau said. "If they don't match for us ... we have some funds going in for next year's ice rink that are based on one-time use funds for next year. It's possible for us to dip into these funds (now) ... but we could be in trouble for next year.

"What we're doing ... is risking not having a rink for next year by doing it this year."

He told both boards that the town's Recreation Department, aided thus far by village businessman Tom Deal of Deal Realty Inc. and the Niagara River Region Chamber of Commerce, "has stepped up" its fundraising efforts and is seeing a positive response.

"There has been a lot of help in the community," Dashineau said. "We're starting to get a slow trickle of sponsors."

Still, Dashineau cautioned of the uncertainty of the overall effort. He explained he was using end-of-year savings left over on a 2016 recreation budget line to get this year's rink project handled. "Normally that would roll over into the town's A fund, but we had to push some things back into 2017 to make this 2016 ice rink work.

"We've gotten about half-way there. We're expecting operating revenues and sponsorships to cover the other half. (But) those revenues are not guaranteed, so if we don't get them, basically what we'll have to do is borrow from next year, which puts next year's rink in jeopardy."

Dashineau appealed to village officials to spread the word to area businesses to assist in soliciting rink sponsorships for this year. He said the rink funding for next year is contained in the town's 2017 budget, "but, again, it depends on revenues that are one-time revenues. So, for (the future), we either have to come up with a very solid substitute revenue plan, either fundraising or a different way."

He said the town owns much of the rink's structural equipment - the rink, tent, boards, coils, etc. But what doesn't make sense to own is the rink's chiller unit, which he said costs $750,000 on the open market. Instead, the town rents the unit for approximately $20,000 per year.

As for the rink being ready for the upcoming Christmas Walk, Dashineau said he was running "razor thin" on an installation schedule, but promised to "work straight through" to get it done.

The chiller unit is expected to arrive after Thanksgiving and Dashineau said he aims to have the rink up and running by Dec. 2. It is expected to remain open for 42 days this season, until Jan. 9, 2017.

With the town committing $47,000 toward the rink's overall $74,423 operations cost for 2016, Dashineau said the remaining funding would come from a village contribution of $5,000; sponsorship revenues; season tickets that would sell for $25 individual and $50 for families; a $3 user fee; skate rentals; the renting of the rink for private parties; plus other ventures, such as holding family picture days.

"This is uncharted territory for us," Dashineau admitted to village and town officials. He added that if this season's goals are not met, "It will have an impact next year."

"Our goal is to make this self-sufficient in the future," Broderick noted. He said that, beyond this year's fundraising and sponsorship efforts, the town would look into such areas as forming committees to pursue various funding efforts in the future.

For more information on 2016 sponsorship opportunities for the Lewiston Family Ice Rink, download a copy of the promotional flier at www.wnypapers.com or visit www.LewPortSports.com.

On Wednesday, the Town Board held a public hearing to hear comments on the 2017 budget, working toward final adoption. In releasing the tax levy details, Town Director of Finance Marti Blazick said town taxes would be used to help fund the town's A fund (Lewiston general) and DB fund/outside village highway accounts. For the A fund, $545,448 would be raised via taxes, reflecting a tax rate of 0.6442; and $499,600 would be raised for the DB fund, for a tax rate of 0.7169.

The public hearing itself saw a handful of residents attending and few comments offered.

"To look into this budget one sees a number of questions that needs to be asked and answered," said resident Paulette Glasgow in her remarks to the board.

Among her many concerns: why was the Lewiston Public Library cut an additional $10,000; why does the town have to spend $360,000 on its attorney contractual line, which reflects an increase of $25,000 for 2017; why is the New York Power Authority's $850,000 in annual funding listed under "projected annual revenues"; what ever happened to the hydropower rebate checks to town residents; why is there $16,000 in a dormant account for Joseph Davis State Park; and why does the town fund $12,000 for a grant writer when grant writing could be pursued either in-house or via volunteer entities in the community.

Glasgow also had questions regarding the Lewiston Family Ice Rink and the use of town resources to raise donations for its operations.

"You have a town employee soliciting from town residents cash donations to cover town expenses - using a Facebook page listing the town's address and phone number - and this activity is in violation of at least three state comptroller opinions," she said. "No one wants to be against the ice rink, but the comptroller's opinion is clear that municipalities have no statutory authority to solicit donations from taxpayers to cover town expenses. Further, it's the opinion of the comptroller that any funds already collected for the ice rink must be deposited into the general fund."

"Since you already have private interests involved in the solicitation of ice rink donations, my suggestion is to privatize the funding, hiring, operating and management of the ice rink, and not use taxpayers funds for this," Glasgow said.

"Tonight you are pondering imposing a town tax, and my question is, who is going to take responsibility for Lewiston's financial mess?" she added. "Depleting fund balances to fill budget gaps, the uncontrollable and wasteful spending of millions of dollars, the failure to oversee and manage public funds, the failure to administer town policy, the failure to establish internal fiscal controls and now you want to impose a town tax? ...Please tell me when this will stop."

Other than Broderick's interest of being available to discuss Glasgow's concerns, few comments were heard Wednesday from board members.

The Lewiston Town Board will meet to adopt the town's 2017 final budget at its Monday work session, which gets underway at 6 p.m.