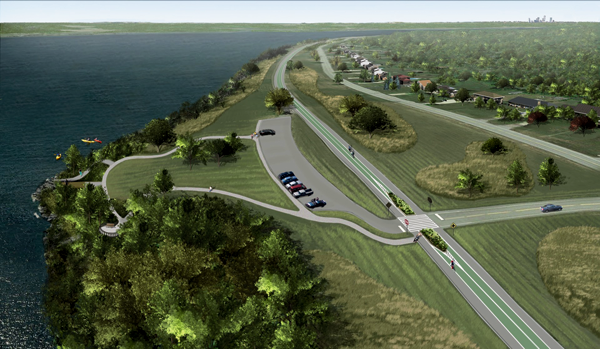 The New York State Office of Parks, Recreation and Historic Preservation provided a rendering of Option 3 for the West River Connector Trail at a work session on Wednesday.

Mark Thomas, Western District director of the New York State Office of Parks, Recreation and Historic Preservation, announced the decision Wednesday in a letter to the Grand Island Town Board. He presented the letter during a Town Board work session held in the Grand Viking Theater at Grand Island High School.

"State Parks has concluded our design review and will begin developing detailed construction plans and specifications for Option 3," Thomas wrote. "We anticipate construction will begin in Fall of 2017 with the goal of opening the new West River Trail to the public in Summer of 2018."

Thomas and engineers with State Parks presented a revised plan for the project, located along the West River corridor of Grand Island. The plan has divided the board and public, with opponents, many who live on the West River, attending the meeting Wednesday holding "Keep the Parkway Open" signs, and proponents of the plan wearing blue T-shirts that said "Thank You NYS for beautifying & improving our community."

"As you well know, there has been much discussion around this project and we thank you as well as the citizens of Grand Island for such an engaged conversation," Thomas wrote.

The letter, given to the board members for the first time that night, reviewed Option 3 and called it the safest of all options, as it:

•Eliminates 55 mph traffic from the west side of Grand Island and state parklands.

•Provides the greatest separation between vehicular traffic and pedestrian/bicycle use, while avoiding the need to install extensive guiderails that would create a visual and physical barrier between West River Road and the river.

Option 3 is more economical because it requires the least amount of new construction, creates no increase in maintenance over the existing parkway, and decreases maintenance costs due to the lower impact of pedestrian/bicycle traffic on pavement, the state said.

Duck hunters will have same access, Thomas said, noting, "They'll have the same sites they've had before and the same system by which we allocate them." Snowmobile and horseback rider uses would remain the same.

The letter addressed what is known as Option 4, presented by Councilman Mike Madigan. Option 4 involves a trail in the median between the parkway and service road.

"State Parks has carefully reviewed this option through the lens of the stated objectives," Thomas wrote. "While the agency appreciates the intent behind the proposal, we have concluded that Option 4 is not a feasible project alternative."

Among the problems, Thomas noted Option 4:

•Would require pedestrians and bicyclists to cross the 55 mph parkway on the north end of the trail (north of Long Road) and again on the south end of the trail. "Crossing a 55 mph roadway is a very undesirable condition," Thomas wrote.

•Is in close proximity to vehicular traffic on West River Road. "Following the terrible tragedy at Delaware Park last year, it is highly probable that the installation of guide rails would be required in certain locations as a preventative measure. Installation of guide rails or similar physical barriers would run counter to the public's stated goal of avoiding access barriers to the trail and shoreline as well as raise the cost," Thomas wrote.

In addition to maintenance and water drainage issues, Thomas said Option 4 would come in at an estimated total project cost of $3.3 million. "This significantly exceeds the project budget," he wrote.

"The residents' safety to me has got to be one of the primary drivers for this decisions. Putting 500,000 more cars a year in front of those houses, I have a big concern with that," he said.

State traffic data (24-hour traffic counts) provided at the meeting found daily averages of as much as 1,550 vehicles. "Essentially, we are looking at a roadway system - both cases, the town road and the parkway - are running below 10 percent of their design capacity. If you move all that traffic on one, you still don't cross 10 percent of their design capacity," Thomas said.

Councilman Ray Billica complained that had the Town Board known the state would close the parkway to vehicles as part of the design, "I don't think there would have been a board member who would have supported it."

Billica said the design of the project, which has been on the table for about two years, "has morphed into what I consider to just be a boondoggle, and I would suggest that possibly the state look at what has been called Option 5 by a resident."

Option 5 (proposed by Islander Bonnie FitzGerald and described in the Nov. 4 Island Dispatch) would keep the road open during commuter time. Madigan said Option 5 has "real potential" and called it a "win-win."

"Members of the public suggested keeping the parkway open to vehicles during the week, but operating the parkway as bicycle and pedestrian only on weekends. Parks reviewed this concept but determined it is not feasible, because it would require installation of extensive structures, bollards, striping, and signage to manage both uses. Moreover, the parkway would maintain the physical and aesthetic character of a high-speed road, greatly diminishing the experience of weekend trail users," Thomas wrote. "Additionally, Parks anticipates significant weekday use of the trail, particularly during the summer when children are out of school. The potential that drivers would fail to understand weekend closures would create an unacceptable risk of vehicle collisions for trail users."

Billica said if Option 5 doesn't work, "maybe we should just leave everything the way it is."

Madigan said Thursday Thomas requested a meeting with him and McMurray "to revisit the Option 4 and 5 proposals."

Councilman Chris Aronica asked if another letter of support was needed from the town because it's not the same plan we initially approved. It is not required. Thomas said the initial request for the trail project came from the town to State Parks. "We didn't approach the town, the town approached us. We've been working with you back and forth for a couple years, now," Thomas said.

"I strongly agree with what Ray said," Aronica added. "I would never have approved this if closing the parkway was the case."

"It's done. They'll tweak it," Supervisor Nate McMurray said of the project. Regarding the alternative options proposed, he said, "It's an evolving process that we've been involved with for a long time and you can't hit reset every two seconds."

In seeing the state's conclusion in moving ahead with Option 3, Madigan said:

"So we've got to nip this in the bud quick," after the meeting, Madigan said. "That's wrong. We're supposed to be working as a partnership."

Thomas said after the meeting the State Parks would respond to the input provided at the meeting.