Army veteran Don Loder shows the T-shirt (back shown below) he'll be wearing when he departs on the Buffalo-Niagara Honor Flight this Saturday. The flights are arranged, free of charge, by the nonprofit Honor Flight program to make sure that World War II veterans get to see the monument built in 2004 in tribute to their military service. (Photo by Karen Carr Keefe)

A Grand Island veteran of World War II will get well-deserved recognition for his military service when he boards the Honor Flight on Saturday for the trip of a lifetime.

Donald Loder Sr., 93, will join 42 other veterans on a daylong visit to Washington, D.C., to see the World War II Memorial, as well as those for the Korean and Vietnam wars. They also will witness the "Changing of the Guard" ceremony at the Tomb of the Unknown Soldier.

"I've been thinking about it for a lot of years," Loder said. "It takes somebody to get it going." For Loder, that somebody happens to live right next door. "My son, Don, looked it up on his computer. He has done the whole thing for me."

Each Honor Flight veteran has a "guardian," and Loder's son will accompany him in that role. With veterans, guardians and staff, there will be a total of 102 on this flight.

Buffalo-Niagara Honor Flight coordinator Michele Conley Vogel said the nonprofit group raises the funds through donations so veterans go free of charge. The trip will cost $64,000, Vogel said. This is the group's first solo trip, and they are very excited about it, she said. In June, they worked with the Albany Honor Flight group to make the trip.

"Our goal is to get them to see their memorial," Vogel said. Since the memorial was not built until 2004, many of the World War II vets never got the chance to see the tribute to their service. World War II vets who signed up for Saturday's flight range in age from 89 to 98. Several Korean War veterans and a Vietnam veteran will be joining the others on this flight. 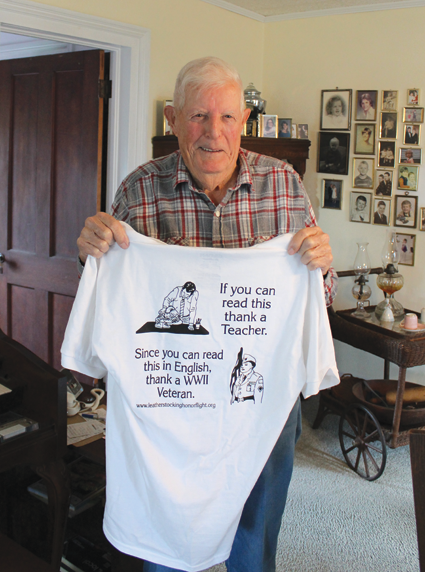 The group will gather at a local VFW post, then be bused to the Buffalo Niagara airport. "Once we get there, there's a huge ceremony," Vogel said, adding the program will include a band playing the National Anthem, prayers and guest speakers. "The whole day is a tribute to the veterans and their service."

They arrive in Baltimore to more tributes and thanks from dignitaries, then board luxury buses. "We have a presidential escort the entire day," Vogel said. "They will part traffic and make these two Honor buses go through Washington, D.C., as if they were the president." After the tour, there's a special dinner, then it's back to the airport.

"When we get home, there's a huge ceremony at the airport. There's hundreds and hundreds of people there, giving them their welcome home that they never received," Vogel said. A Scottish bagpiper greets them at the gate. "We get into formation, and they lead us through the procession of people cheering them on. ... It's just a beautiful thing to be a part of. ... It's amazing how many people appreciate what these veterans have done for our country," she said. "A lot of times, we'll be walking through an airport with these veterans - they're up there in age, most of them are in wheelchairs - and there's not a dry eye in the place."

Loder said he likely will be offered a wheelchair for the trip, but he gets around just fine. He still maintains an active lifestyle, walking five or six days of the week, doing his own cooking and even baking bread for himself and others. "I've got standing orders," he said.

Loder has four children, nine grandchildren and 10 great-grandchildren. His wife, Dorothy, passed away in 1999.

He was a longtime mail carrier and skilled carpenter, building and remodeling houses. He worked for Bell Aircraft, as well.

During his military service, he was an airplane and engine mechanic for B-17 Bombers and, toward the end of his service, was learning to be an instrument mechanic on B-29s. While on furlough, Loder was a pallbearer for fellow Islander Charles DeGlopper, who died in battle in the D-Day invasion in Normandy. DeGlopper, for whom the Grand Island VFW post is named, posthumously received the Congressional Medal of Honor in 1946.

Loder might have served overseas as several of his buddies did, if not for contracting spinal meningitis while in camp in Florida. Hospitalized for five months, he went from critical condition to 100 percent recovery. "Doctors, refer to Don as 'the Miracle Case," according to a report in the April 6, 1943, edition of "The Islander," a hometown newsletter sent to servicemen during WWII, and founded by fellow Islander Shirley Kreger Luther.

Loder is humble about his years serving his country. He said that although he didn't serve on the battlefield, he did what he did "so they could drop the bombs." He said he's grateful his stateside service helped the war effort.