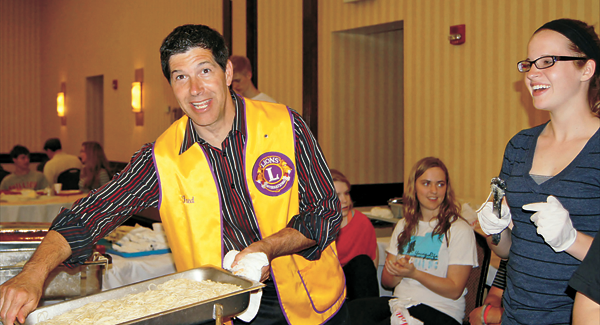 For 60 years, Grand Island has had a special friend working on its behalf to create a better life for those less fortunate in the community.

That special friend, the Grand Island Lions Club, is taking a well-deserved bow next week. On Oct. 26, the club will celebrate its history of service with a 60th anniversary dinner at the Buffalo Launch Club.

"We Serve" is the Lions' motto. The mission of the Grand Island club is to help those in need in the community, with special emphasis on the vision and hearing impaired, and children with disabilities. Many know that the Grand Island club collects used eyeglasses to help sight-impaired people all over the world. But there's a whole lot more that the club accomplishes.

"The overall goal is to assist the less fortunate," said Club President Dick Crawford. "We do whatever we can to provide any services they require."

Crawford has an extra reason to celebrate. "Lions has been in my life for all of my life. To be the 60th president in my 60th year is kind of unique," he said. "It gives me a special feeling to be associated with this group."

Crawford has been a Lions Club member for 27 years. "As a young man, my dad (Richard Crawford Sr.) was a member of Lions. His influence on me drew me to it." All seven of the Crawford kids had a tradition of helping their dad with the Lions activities, he said.

"Then, we became the first father-son presidents. ... I am now the first repeating president in 60 years."

Crawford said there's a fellowship that Lions enjoy by being part of a service club whose activism helps the community. "I would attribute that to the members, themselves, who are all doers. When a special project comes up, everyone pitches in."

And there are plenty of projects to go around. "What stands out most are the two special projects we do - the Special Kids Picnic and the spaghetti dinner," Crawford said.

The picnic, held in July for the past 58 years at the Buffalo Launch Club, offers a day of fun to about 800 area children with special needs. They are treated to lunch, pony rides, boat rides, Shriner Mini Kar rides, face painting, entertainment by Step in Time Baton Dancers and many happy times. Crawford said it takes lots of helpers to provide that special day.

"The cooperative participation we get from the community is just incredible," he said. There are volunteers from the Shriners, the Scouts and the schools - in particular the government classes and the National Honor Society.

"They gain a valuable insight into helping the less fortunate. It's pretty powerful to see the kids coming back year after year," he said.

For the kids who are served, he said, "It's a day they'll remember forever."

Other service clubs and businesses are there to lend a hand, as well. These include the Grand Island Fire Co., the Knights of Columbus, other area Lions clubs, Collins Marine, Tops Markets, Tim Hortons, Dunkin Donuts and the Buffalo Sabres.

Lions' activities have become part of community life, as people look forward to them year after year.

Crawford said the Lions' spaghetti dinner fundraiser held each spring is almost as old as the club itself. "It's become a community event - long in tradition, not only for our community, but for other Lions clubs in the district, including our sister club of Merritton, Ontario.

Past Lions President Tom Witkowski said helping out others in need is a great experience.

"The one thing that I enjoy most about being a Lion is the smile on the face of someone we have helped whether it be here on Grand Island or somewhere in the world," he said. "We Lions may not visibly see those smiles, but we know through our worldwide association of members and our relationships established with numerous charitable, humanitarian and medical organizations that we do make a difference, every day, everywhere."

Witkowski joined the Lancaster Lions in November 1993 and currently maintains an associate membership there after transferring to the Grand Island Lions Club in 2004. He'd like to get more people involved in the Grand Island Lions' mission. "We encourage individuals to connect with our efforts that make life on this diverse planet a truly rewarding experience," Witkowski said.

Past President Dave Chervinsky has been helping to update a club history that he'll present at the anniversary dinner. Co-authors include Crawford, who began the history for the 50th anniversary, as well as Witkowski and Annette Boies-Lobl.

"The Lions Club has meant the world to me," Chervinsky said. "I get more from the club than I give, and it's helped me grow as a person." He joined the club in 2011 after retiring from his 41-year career as a researcher at Roswell Park Cancer Institute.

Services include a "loan closet" for distribution of walkers, wheelchairs and other durable goods. The club is also active in a number of drives both locally and internationally to help the vision-impaired. These include the White Cane Drive in August.

"In the past 10 years, over 10,000 eyeglasses have been collected, over 800 requests for loan closet items have been filled and over 1,440 meals have been delivered for Meals on Wheels," Chervinsky quoted from the club history.

Donations in the past 10 years total more than $55,000, he reported. The funds have been donated to help a very long list of worthy causes. Among them are:

•For equipment for the Miracle League of Grand Island and WNY and their new Beep Baseball league.

•For large print books for the Grand Island Memorial Library.

•For food and necessities through the Grand Island Neighbors Foundation.

•For equipment for the Lions Diagnostic Eye Center at the Ira G. Ross Eye Institute in Buffalo.

In all, nearly 70 charities have benefited through contributions designated for humanitarian purposes.

The club also has reached outside the local community for help in funding several major projects, according to the history. A notable example of this is the securing of a $75,000 grant from Lions Club International Foundation for the construction of the Miracle League ball diamond on Grand Island.

The local club also participates annually in a Peace Poster Contest, which encourages middle-school-age children to creatively express their concept of world peace.

"I believe it's an important part of our being, to see what we can give back to our community and our nation," Crawford said.

"A historical part of this club is to fulfill what we feel is our mission: 'Not above you, not beneath you, but with you.' I think that motto is the lifeblood of our club."

The anniversary dinner will be a commemoration of the past. But it will also be a charge to the future, Witkowski said. "Our focus remains to help those who need a helping hand no matter where they live. I am proud to be a member of this awesome group of men and women! Time to celebrate and also plan for our next 60 years!"