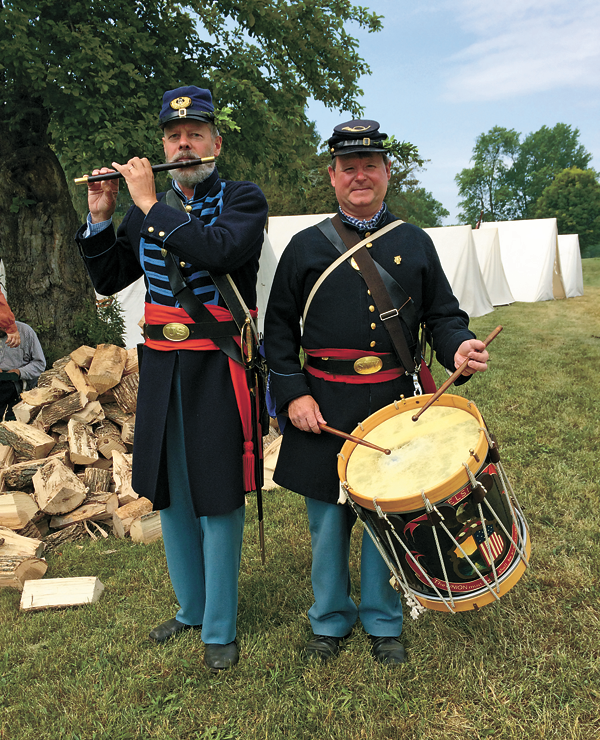 Jim Pace, left, playing the fife, and Brian Seibel, playing the drum, comprise the Union Volunteers Fife & Drum Corps. Here, they perform in Fort Erie, Ontario, for the 150th anniversary of the Fenian Invasion, which occurred one year after the Civil War. Pace and Seibel will perform military field music of the American Civil War as part of their presentation at 7 p.m. Nov. 3 at Historic Trinity Church in a program sponsored by the Grand Island Historical Society. (The Fenian Invasion involved Civil War Irish veterans on both sides of the conflict. The plan was to take over Canada and hold it hostage until Britain released Ireland.)

A musical history of the Civil War

For a tuneful glimpse into the music of the Civil War, mark your calendars for Nov. 3 and plan to be at Historic Trinity Church before the start of the 7 p.m. program.

That's when the Union Volunteers Fife & Drum Corps will march in and transport the audience - through music, stories and photos - to an era when the state of the union hung in the balance.

The Grand Island Historical Society is sponsoring the lecture/demonstration, which is free and open to the public. Seating will be limited.

"They do actual music from the Civil War era. I think the fact that they actually are playing music probably is very appealing, especially if you're a history buff," said Adele Upton, the society's vice president for programs.

But fascination with the Civil War is not just the province of historians. This topic holds an attraction for a much wider audience - as proved in the popularity of Ken Burns' PBS series "The Civil War."

"It was the only entirely American war," Jim Pace said, to explain the high interest in Civil War history. He's the "fife" half of the duo that will perform and inform about what he calls "field music." He and his partner, drummer Brian Seibel, form a musical duo that strives to achieve authenticity and integrity in every aspect of their presentations. They also perform at parades, ceremonies, civic events and re-enactments. The bugle is also considered a field instrument, but was mostly a cavalry instrument, Pace said.

They intend to bring history to life in their Grand Island performance. "It's a program that's educational and informative, but it also has an entertainment aspect to it, because of the music," Pace said. "It's not just a straight lecture about historical facts. We demonstrate it. We play stuff. Some of them are the tunes the soldiers would sing, and some are just signals that don't have any words."

The Communication System of the Civil War

"Field music was an essential part of the Civil War that has been pretty much forgotten," Pace said. Every company had at least two musicians. "The fife and drum were just in every single aspect of the armies, both in battle and in camp. They ran everything. It was the communication system of the Civil War."

•The first order of business for field musicians was camp duties. "There are about 40 calls a day that are done during camp, which regulated every single aspect of the soldier's life," Pace said. "The calls defined the day "from the time they get up, to when they would have their meals, various work detail signals - right up to lights out at the end of the day," he said.

•There also were ceremonial duties. "Virtually every ceremony had field music involved, whether it was a dress parade or a funeral ceremony - all had ceremonial music," Pace said.

•Field musicians provided entertainment to the soldiers, acting as a morale booster when "they were called on to serenade troops after long marches, during lulls in the fighting, and at the end of battles," according to "More Than A Drummer Boy's War: A Historical View of Musicians in the American Civil War," by Maureen Manjerovic and Michael J. Budds.

•The drum, especially, took over during tactical commands on the battlefield, Pace said. This is also when a bugler would have been employed to signal in order to regulate troop movements.

"The enemy did know the calls, and used the same calls in many cases. They had the same officers from the same schools," Pace said. "You knew yours because of the proximity of the sound, as well as the individual style," he explained. "Sometimes deception was actually used, and false signals would be given to confuse the enemy."

"The tuning is a little bit different from what we're used to listening to. It's very shrill," he said. "These are outdoor instruments. They can be heard 3 miles away."

Musicians were considered uniformed non-combatants. Pace has written to the Department of the Army for information on the number of casualties suffered by musicians in the Civil War, but learned that record-keeping didn't differentiate as to the positions of those who were injured or killed in battle. He said they do know that musicians' casualties were almost proportional to the regular army, "because a shell coming in - or the bullets - didn't differentiate."

Grand Island Participation in the War

Brutal battles, accidents, starvation and disease claimed an estimated 620,000 soldiers' lives during the War Between the States, nearly half of all U.S. war casualties. "There were 64 men involved from Grand Island during a time when, really, the population wasn't that big on Grand Island. So it was probably a pretty substantial percentage that were involved in the Civil War," Upton said.

Pace said Grand Islanders may have joined the 155th Regiment or the 49th, which was based in Buffalo, or they may have joined ones from Niagara County. "New York state provided the largest number of volunteers in the Union Army," Pace said.

Pace is a retired music teacher and a history enthusiast who taught himself to play fife. He also plays with a number of different bands, in which tuba, bass and cello are his main instruments.

He and Seibel have been performing with the fife and drum corps for about six years. When Pace started looking into field music, the closest group was in Rochester. "So we started our own group right here. It was a combination of the history and the music - and that's why I enjoy it so much," he said

The program has an emotional aspect to it, as well, Pace said. "When you talk about these soldiers and read their letters and see how they spoke, they're like real, everyday people that you can relate to. We get people who are in tears at the end - it's pretty moving."

The Grand Island Historical Society meets once a month for a general business meeting and some kind of presentation. Look for the dates in the Island Dispatch and the Grand Island PennySaver. The meetings are free and the public is welcome. The Grand Island Historical Society is headquartered in River Lea mansion on the grounds of Beaver Island State Park. The society holds Christmas luncheons; open houses where docents provide information; and Victorian teas. The group is also planning to teach an adult education course on Grand Island history in the spring, with one of the sessions to be held onsite at River Lea for a tour.