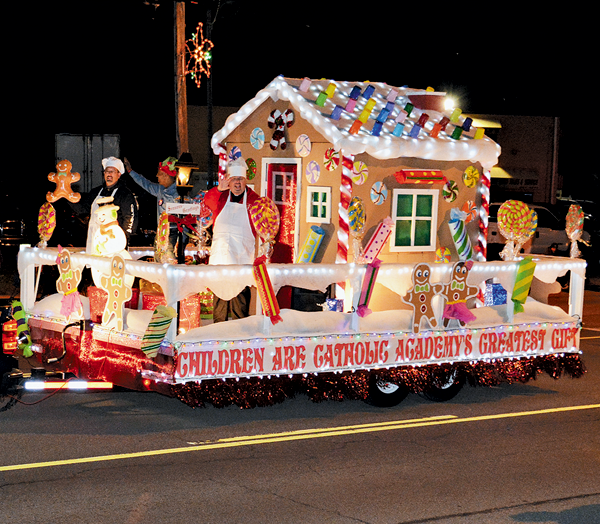 A float participating in the Niagara Electric Lights Parade. (Photo by Marc Carpenter)

Community comes together in preparation for Niagara Electric Lights Parade

Applications for participants are available now at tnbpa.com

The holiday season is right around the corner, which means the Niagara Electric Lights Parade will soon be kicking off local celebrations.

The parade, presented by the Town of Niagara Business and Professional Association Inc., will take place at 6:30 p.m. Saturday, Nov. 5, starting at Fourth Avenue and traveling down Military Road.

During the parade, family and friends can view brightly decorated floats, while listening to music, watching live performances and collecting candy.

"It's amazing how many people come to me and tell me that they never miss that parade," said Gary Strenkoski, parade coordinator and former TNBPA president.

"It's the only parade that we have this time of the year," said Town of Niagara Town Clerk Sylvia Virtuoso, who also has a hand in helping with the parade. "People are looking forward to the holiday season and seeing Santa, and no matter what the weather ... we still have a great turnout - and it gives an opportunity to all the civic organizations to come out and participate in the community."

Also, the event draws thousands of people to the business district, while the food drive encourages people to give back to the community.

"So we're working for the residents, for the businesses, for the community, and kicking off the holiday season," Virtuoso said.

TNBPA members will help put on the parade from start to finish, including cleaning up Military Road the day after.

Signs promoting the parade have already been set up along Military Road by volunteers David Miller of M&M Electric and his son, Dylan.

For the past several years, the parade's major sponsor has been Republic Services - Allied Waste Industries of Niagara Falls, which owns and operates the Niagara Falls sanitary landfill as part of its host community agreement with the Town of Niagara. Company staffers and their families have participated in the parade.

This year, National Grid has joined in sponsoring the event by providing additional funds, Virtuoso said.

Traditionally, volunteers from several other local organizations and groups also join forces to help make the parade possible. This year is no exception.

The Kiwanis Club of Niagara-Wheatfield will play a significant role in getting the parade up and running, Strenkoski said. Members will volunteer as marshals for the parade. They arrive at the starting point on Fourth Avenue hours before the parade begins. There, they organize the overall lineup and prepare for participants to arrive.

Each participant, whether driving a fire truck, marching in a band or riding atop a festive float, is directed to line up in a specific order in accordance to the listings given to both the announcer and judges at the reviewing stand.

"I call it controlled chaos," said Danny Maerten, president of the Kiwanis Club of Niagara-Wheatfield. "As a community service organization, we totally volunteer to assist in the success of this event."

"Without their help, I'm not sure that we can really pull this off," Strenkoski said. "It's a big job and they do it very, very well. When I used to do that, it was mass chaos. ... They deserve a lot of credit, a lot of praise."

Downbeat Percussion, a group that performs all over Western New York, including at Buffalo Bills games, will entertain the crowd at this year's parade.

"People really like the music," Strenkoski said. "They like the marching bands, they like the dance groups, and we're actually still looking for people to participate."

Although the parade offers entertainment and family-friendly fun to those in the community, Strenkoski said, its food drive is what's really important.

"You just want to feel good about what you do besides (seeing) smiling faces," he said. "We collect, literally, a ton and a half of food every year."

Frontier Volunteer Fire Co. will gather nonperishable food donations from spectators along the parade route. Donations can also be brought to the parade's reviewing stand.

And for those who want to directly donate to another specific church or organization, "just let them know it's on behalf of the Niagara Electric Lights Parade," Virtuoso said. "We just encourage everybody to donate."

Overall, Strenkoski said the parade is put on for families. "Not just in our communities, but throughout the area. ... We welcome everybody. It doesn't matter where you're from or anything like that. It's not just a Town of Niagara event."

Surprisingly, Strenkoski said he has never actually watched the parade, as he walks at the tail end of it each year.

"I've never seen it," he said. "I don't know why. (Maybe) it's just a nervous thing? Even when it's on television, I always turn it off. ... But I get the reviews from the people along the sidewalk ... and I ask them, 'Did you enjoy it?' And everyone (says) it was phenomenal, that they enjoyed it. People look forward to it."

Applications to take part in the parade lineup are currently being accepted and can be obtained online at www.tnbpa.com. For more information, contact Strenkoski at 716-550-0673.