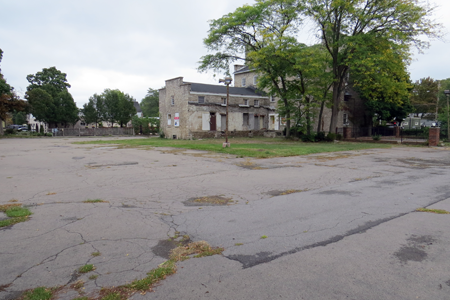 A small change on paper made a big difference Monday, as the Village of Lewiston Historic Preservation Commission approved a modified request by Hastings Lewiston Inc. to subdivide the property at 460 Center St. Commissioners voted 4-0 to grant a certificate of appropriateness, and to move the concept along to the Planning Board.

Hastings Lewiston business consultant Stacey Sheehan presented the HPC with a revised drawing that showed the property boundary cut in half from north to south, with one parcel designated for the Frontier House - including the former McDonald's restaurant drive-thru lane, which extends from Center to Ridge Street - and a second parcel for the land that's presently an empty parking lot.

Sheehan presented a similar drawing last month, but the HPC voiced concerns over the way in which the one-acre property was divided. As shown then, the lot was cut into an almost upside-down L-shape, with a smaller portion assigned to the Frontier House.

The HPC said that proposal didn't include enough parking spaces or allow for proper motor vehicle entry and exit.

With the black property outline now moved on paper, "This is perfect," Commissioner Lee Simonson said. "This is excellent and allows for the greatest use and potential for the building."

"This achieves all of our goals, and I think it's tremendous," he added.

"This is a good move. This change here is an excellent move, I think," HPC Vice Chairman Ken Slaugenhoupt said.

In an email Tuesday, writing of the HPC's decision, Commissioner Jim Fittante said, "This was a major change from the first submission to a second submission. The parking is a huge issue for the preservation of the Frontier House to go from nine spaces to 28-plus spaces. Parking is vital to the longevity of the Frontier House."

The first and second subdivision drawings for 460 Center St.

The HPC asked Sheehan to further revise the line around the first parcel to include the Frontier House's southwest steps, and to add an additional five-foot buffer around the front of the building.

"If you can move that over five feet, you've got my approval," Simonson said.

"I think the whole line should be moved over a little bit," HPC Chairman Harry Wright said.

"That is a historical feature to that building," Fittante said.

"We want it to be accessible and usable," she added.

The HPC voted unanimously in favor of the subdivision certificate, contingent on the staircase addition. Commissioners Kelly Lauber and Loretta Frankovitch were not present.

The brevity and ease of the discussion between Sheehan and the commissioners were a far cry from the September HPC meeting.

At that time, the board strongly suggested Hastings Lewiston produce a buyer before or at the time of requesting a subdivision. Commissioners said they sought a better understanding of the Frontier House's future use.

Sheehan said some of the usage questions should fall at the feet of the property's next owner, but she said then and reiterated this week that no buyer would be publicly presented to the board.

Slaugenhoupt said, "I want to clarify. ... I think you misunderstood what we said when we talked about needing to see what a potential buyer would do. It's not that we want you to bring us a buyer. It came up because I heard from both of the principal owners (Richard Hastings and his son, Alan) ... that they were unlikely to do anything with the building. They were not going to rehabilitate. So, given the information that the current owners are not interested in rehabilitating the building, we were faced with a request to issue a certificate of appropriateness for a piece of property that really limited the capability of the building (in terms of parking and access).

"I was trying to say, until we know what the use is going to be, my summary would be that, since it's going to have to be up to the buyer to figure out what that use was going to be, we wouldn't know until that buyer came forward and worked with you.

Fittante said, "With this layout ... I feel that there would be adequate parking for whatever use might go in there."