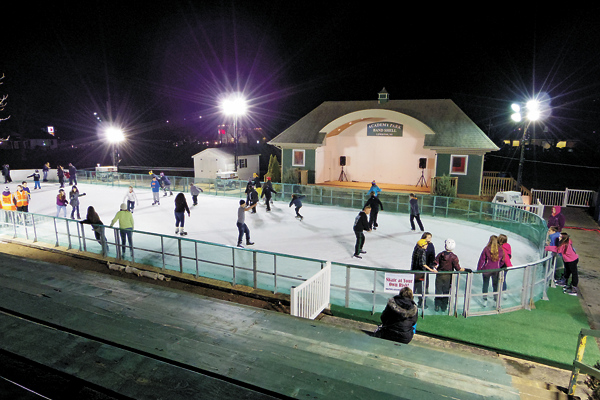 The Lewiston Family Ice Rink is among the items facing cuts in the Town of Lewiston's 2017 budget. (File photo)

The Town of Lewiston is facing some very tough choices as the budget season moves along.

Following release of its tentative $16.250 million budget for 2017 - one which calls for the return of a town tax for the first time in nearly two decades - Supervisor Steve Broderick, Finance Director Marti Blazick and attending board members met with Lewiston's nonprofits, plus town department heads, in a marathon session Monday afternoon at Town Hall. Just about all groups face a 10 percent cut in funding from the 2016 budget as Lewiston continues to grapple with ever-increasing expenses and declining revenues.

Representatives of the Historic Lewiston Jazz Festival were not in attendance, and town officials said no 2017 budget-funding request had been received by Artpark & Company.

Those who came were armed with impressive presentations and arguments extolling the values of their respective programs to the community, and requesting at least a return of the prior year's funding.

"The Lewiston Library serves numerous interests," said Linus Ormsby, board of trustees chairman. He spoke of the more than 100,000 who visit the library annually, its range of popular programs and services to community, the library board's handling of capital improvement projects, a possible need for expansion, and hopes for establishment of a Lewiston Public Library Foundation to better help it meet its needs.

Ormsby said the library could sustain a temporary cut to help the town, but added a permanent loss would have impact.

Broderick responded he was hoping for "just a one-time cut."

Blazick said the library's funding allotment is based on sales taxes to the B Fund, which are down.

"Something has to be taken out," she said.

Jennifer Pauly, president of the Niagara River Region Chamber of Commerce, said her organization, which has seen previous town cuts to its budget, serves as a catalyst for activity in Niagara County - from promoting countless local events to its headquarters serving as a welcome center for the community.

She noted the 409-member chamber consists primarily of "mom and pop" operations in the community, and that opportunity for it gaining additional funding sources is limited.

"The arts are not a luxury; it doesn't make sense of cutting the cultural sector," commented Irene Rykaszewski, executive director of the Lewiston Council on the Arts. She said the LCA serves a wide audience from throughout Western New York and Southern Ontario, and through its many offerings has been instrumental in bringing in significant outside revenue to the Lewiston community. "These cuts will also impact our partnership funding" with other nonprofits, she said, and in turn it could have a bearing on LCA programming.

Others echoed similar concerns of the town's planned cuts on their operations, including former Niagara Falls Mayor Irene Elia who represents the Home Assistance Referral Team (HART). She described HART as an all-volunteer agency that coordinates assistance to families, serving as a safety net not only for Lewiston, but for the entire county.

"Any cuts would be severe," she said.

Susanne Shears of the Niagara County Community Action program said 100 percent of its funding goes to serve the needy, in the form of food kitchens, plus assorted home improvement and family assistance programs - all intended to promote independent living for its constituents.

"We have received your support for many, many years," she said. "It is vital to our agency."

Later that afternoon, a number of town department heads appeared. All spoke of continuing efforts aimed at controlling costs and greater efficiency. And all requested a greater share of the funding pie to enable them to not only improve, but enhance their respective operations - all for the overall benefit of the town.

The town's response, in a nutshell: With few exceptions, do not expect any funding increases.

"We're in a tough situation," was the overall response offered by both Broderick and Blazick to the requests.

Just how bad has it gotten?

It was learned this week the town, barring any miracles, would suspend its operations of the Lewiston Family Ice Rink for this winter at Academy Park. The rink, run by Mike Dashineau of the town's Recreation and Parks Department, has typically seen an opening on Christmas Walk Weekend in early December, and remained in operation for roughly 60 days (to the end of January). The rink offered free skating, low-cost skate rentals, a variety of offerings for area children and families throughout the holiday season and on school breaks, plus a welcome alternative to winter.

Town officials struggled with their decision to suspend the rink's operations this year.

Blazick said the funding dilemma with the rink was based on the fact Lewiston could not pursue New York Power Authority Greenway funding as it had in previous years.

Blazick said the town owns the tent, plus rink equipment - boards, flooring, etc., paid for earlier by Greenway - but the town also used Greenway funds to cover the rink's various operations costs - namely the renting of specialized chiller compressor units used to create and maintain ice surfaces, plus other equipment.

The town provided additional funding from its recreation accounts plus money gleaned from an estimated $15,000 to $20,000 in sponsorships pursued by Dashineau to cover other costs, such as utilities, plus town personnel to build and staff the rink.

"Greenway requested that we not apply for it," Blazick said.

She noted Lewiston's three-year contract with Greenway, which assisted the town with its assorted operations costs, ended, and the rink is now a budgeted item.

"It's not the intent of Greenway to fund operations and maintenance," she said.

Blazick estimated total annual costs to operate the rink would be $93,350 on the 2017 budget. "This was never in the budget before," she said.

Broderick said the town had considered its options - from cutting the length of operations from 60, 45 or even 30 days, to charging daily fees for users. Those options, added to the problems of the town being behind on preparing the logistics for a planned early December opening of the rink (securing pricey compressor and ice making equipment), being behind on sponsorship commitments needed to operate the facility, plus the budget's A and B fund problems, prompted the town to table the rink for this year.

Broderick said the town fully wants the rink to open. But he wants to put it on hold until December of 2017 in order to get the aforementioned problems rectified. Chief among them is to get a full-fledged sponsorship campaign underway in January to allow for an opening of the rink on schedule, come next December.

"Hey, give us a chance to do this right. We're trying to get this right," Broderick said. "We have to make tough decisions to be healthy (down the road). This is one of them."

As news leaked out this week of the rink's likely suspended operations for the upcoming holiday season, community interests started to come forward.

In an email, Tom Deal of Deal Realty Inc., wrote, "It is looking like the Ice Rink at Academy Park is going to go away for what our elected officials are calling a year, in hopes of it returning in 2017 with a different source of funding. It is my opinion that once something like this goes away, it never comes back. If we as a community let this wonderful family activity go away, we will never see it again."

He continued, "The rink provides a great opportunity for kids and families to spend time outside during the winter season, but (it) also allows many of our local children an opportunity to learn valuable life lessons by applying, interviewing and working at what may be their first job.

"We all love Lewiston and the quality of life it offers us, and this is one more thing that if taken away diminishes what we have here. I am also sure that many families spend time and money at our various businesses as a result of their visit to the rink.

"There is money available to fund the rink this year and to allow it to remain open, but we have to convince our leaders that this is what our community wants and deserves and the 30k-40k necessary should be allocated to save it. We have options!

"I can envision the white lights we talked about moving (the Center Street lighting) being incorporated with the ice rink to create a beautiful and fun experience for our town and its residents. Even if we have to start charging a nominal amount, it would be well worth it to keep the Ice Rink alive. ...

"We appreciate (elected officials') service to the town and everything they do, but the only way we can save the rink is by letting them know that we want the ice rink to remain a fixture in Lewiston for years to come. I myself love driving by and seeing the rink lit up and the families out skating.

"It is a tight time for everyone, but these other events/amenities aren't going away, just the public support is being reduced. These reduced funds can be made up privately through additional sponsors and marketing efforts. The rink will be going away and most likely not returning.

"There isn't much to do during the winter when the weather changes and we are not talking a lot of money or a permanent allotment of funds. The money for the rink was set in the budget this year via Greenway funds, but were not received and thus the shortage.

"Next year the rink can be funded, but we need to keep it going for this year."