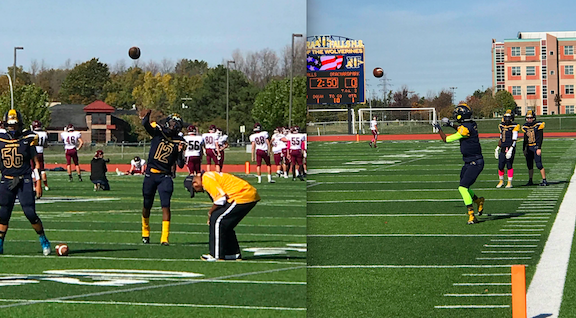 Niagara Falls has momentum heading into next weekend's playoffs.

In front of a packed house celebrating Senior Day at Niagara Falls High School, the Wolverines defeated the Orchard Park Quakers, 26-23, on Saturday.

The game was action-packed, with both teams making big plays on offense, defense and special teams.

Orchard Park received to start the game and started at their own 20 yard line. On the first carry, running back Josh Dahl took it 31 yards into Niagara Falls territory. Orchard Park would gain three more first downs - one on a third down play that gained seven yards, and then a successful fourth down. But it was all for nothing, as the Wolverines held Orchard Park on the next four plays, resulting in a turnover on downs.

The first Wolverines drive did not go as planned, resulting in a fumble in their own territory. This gave the Quakers great field position in Niagara Falls territory.

After a shovel pass that went for 17 yards, the Wolverines held the Quaker offense for the next three plays, resulting in a fourth down and two yards to gain. Orchard Park quarterback Dillon Janca stepped back and fired a pass to the right side that was intercepted by the Wolverines' Cortese Myles, who ran it back for a long touchdown.

After an extra point, the score was 7-0 Wolverines.

Orchard Park showed no effects of the interception on their next drive, taking only four plays to score. A long pass from Janca to Matt Honer, tying the score at 7, capped off the drive. This would be the score at the end of the first quarter.

The Falls' next drive started hot and went cold quickly. The Wolverines used five plays to gain two first downs, but after a fumble and a bad snap, the offense faced a long third down play that resulted in an incomplete pass. The Wolverines elected to punt into the wind on fourth down, and it was a struggle. The punt went high in the air and the wind caught it quick, dropping it for only a nine-yard gain.

Orchard Park had great field position at the Falls' 38. After a couple of Josh Dahl carries, Orchard Park was moving well, until a penalty moved them back to the 30. It was eventually fourth and 22, and the field goal unit came on the field for Orchard Park. The snap was good, the kick was wide left, but there was a flag on the play against the Falls for roughing the kicker. This resulted in an automatic first down and a gain of 15 yards.

On the first play after the penalty, Dahl ran it into the end zone untouched. On the extra point attempt, the snap was wild and the holder had to run after it and find someone to throw it to. He found an open receiver, who almost got in for two points, but wound up a yard short. Orchard Park led 13-7.

On the Wolverines' next drive, the offense faced a third and 11 play. Quarterback Jhamir Isom threw to his receiver, who was being tightly guarded. The referees threw a flag for defensive pass interference, giving the Falls an automatic first down and a 15-yard gain. On the next play, Isom took matters into his own hands, scrambling to the sideline, avoiding defenders, tiptoeing along the sideline and then making a cut across the field. He ran 65 yards for a touchdown. The extra point was no good, but the score was again tied, this time at 13.

Orchard Park has a little time left before the half to try and get points. After a kick return to midfield, the offense ran 12 plays, the last resulting in a perfect pass from Janca that went in-and-out of his receiver's hands in the end zone. Brian Strybel came on to kick a field goal for the Quakers and, this time, the kick was good. The score was 16-13 Orchard Park heading into halftime. 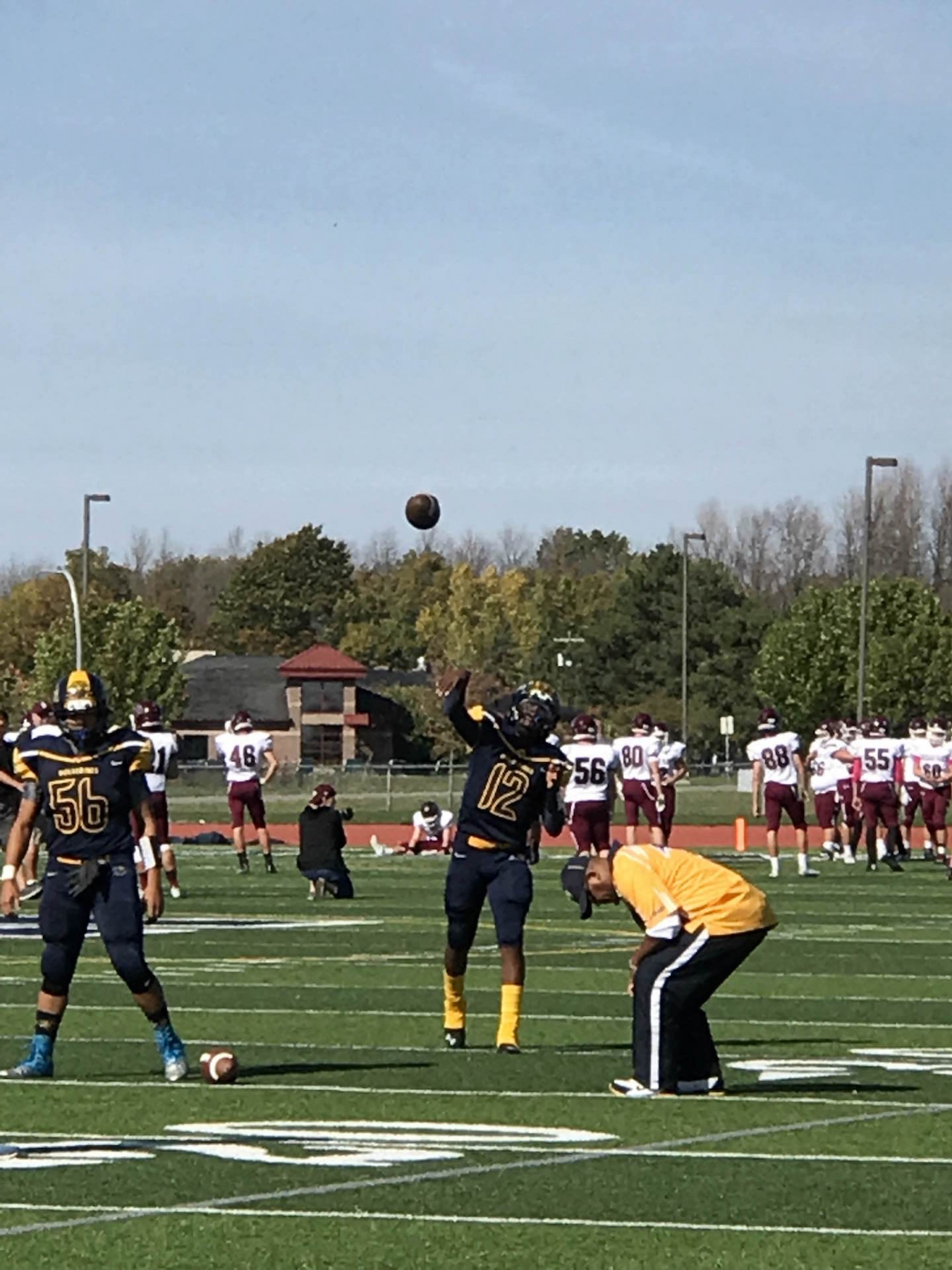 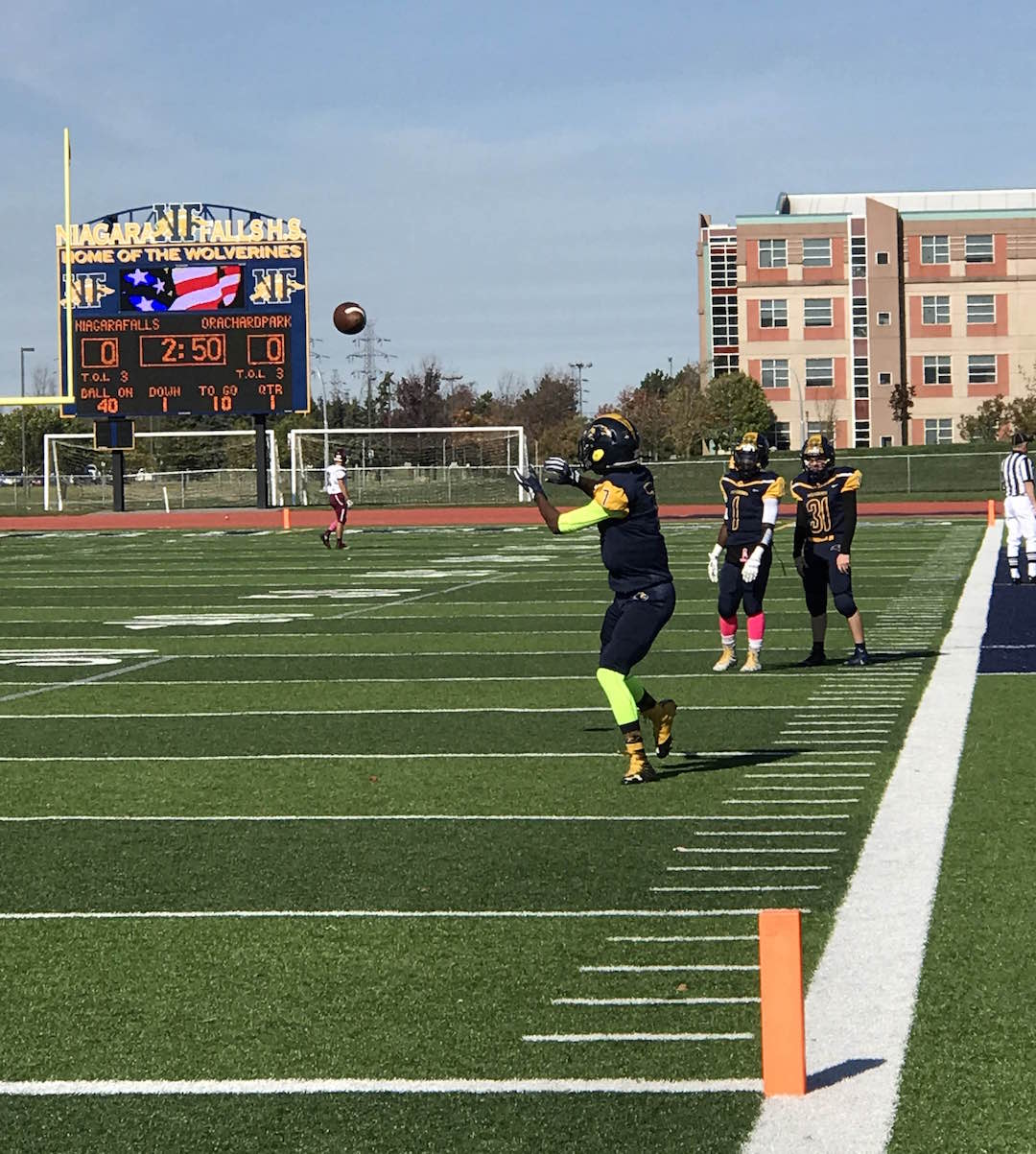 The Falls received to start the second half, but could only gain one first down. They were hurt by a holding penalty that made it fourth and 29. Once again, the wind played a factor on the punt attempt, and this one only made it to the Wolverines' 37 yard line.

The Quakers took over with good field position again, but it ended quick and on the second play of the drive, as Janca was intercepted for the second time.

Isom and the Falls offense came back on the field looking to get back on the board. After big gains by Dee Hunt and Hassen Pruitt, the Wolverines faced a third and two. The play looked like a disaster at the start. The snap went over the head of Isom and he had to run back and grab it. Isom kept his head up and didn't give up on the play, finding a wide-open Jay'meire Maye, who ran it in for a miraculous 37-yard touchdown. The extra point was good and the Falls now led, 20-16. This would be the score at the end of the third quarter.

"The snap went over my head, and I picked up the ball, turned around, and saw a ton of white jerseys in front of me," Isom said after the game. "And then No.14, Jay'meire, wide open, and I just threw it to him and he ran it in."

After another long return for Orchard Park, running back Nico Rapini ran for a 41-yard gain. After two plays for no gain, it was third and goal. Janca received the snap and scrambled to his right into the end zone for a touchdown, but it got called back on a penalty. This made it third and goal from the 20.

Niagara Falls sniffed out a screen play, which gained nothing. They brought out their field goal unit once again. The kick sailed wide left for Strybel, and the score remained 20-16.

The next possessions for each offense would stall. Both the Falls and (for the first time all game) Orchard Park were forced to punt.

The Wolverines next offensive drive saw a lot of running backs Pruitt and Hunt. After Isom completed a pass to Maye for 13 yards, Pruitt took a handoff and ran for an 18-yard gain. Hunt took the next handoff and carried defenders on his back for seven yards. After two plays of no gain, coach Don Bass called timeout on a fourth and six play.

The Wolverines came out of the timeout ready to go for it on fourth down. Isom received the snap and faced heavy pressure from the Quaker defense. He showed some elusiveness and found Pruitt for a short pass. Pruitt ran past the first down marker.

After another short gain, Pruitt took a handoff and ran it in for a 15-yard score. The extra point was no good, but the Wolverines took a 26-16 lead.

The Quaker offense was running out of time and needed points quickly. They didn't get any here, and, after an intentional grounding call, the Quakers went for it on fourth and 29 and failed.

With 3:02 left in the game, the Falls took over, looking to run time off the clock. After three running plays, the Falls punted.

Orchard Park wasn't finished. Janca marched his offense down the field and found Nic Bruce in the end zone for a touchdown. The extra point was good, cutting the Falls' lead to 3 with less than a minute left.

The Quakers comeback hopes came down to an onside kick they needed to recover. The kick was a good one, and a huge dog pile formed for the football. At one point, Orchard Park players went crazy thinking they had the ball, but, after the referees dug through the pile, the ball was recovered by the Falls.

Isom would take a knee and let the clock run out. The final score was 26-23 Wolverines.

This game had a playoff feeling. Both teams entered with a strong record, and both played fighting for something.

Niagara Falls has not had recent success against Orchard Park, so when the final horn sounded, there was a lot of excitement in the air.

"It felt good to win, and it's like we're gonna go into the next game with a lot of momentum, because nobody thought we were going to win, and we came out with the 'W,' " Isom said.

Bass and Isom acknowledged there are still things the team needs to work on for next week's playoff game, but both were happy about how the team played.

"What I saw from my team was resiliency and confidence," Bass said. "We have to show up our special teams. We have to be able to cover the kickoff better."

"Everybody's just gotta stay on the same page," Isom said. "We gotta work hard, no days off, and we gotta fight in practice and act like it's a game."

It was Senior Day for the Wolverines, and Bass had praise for his seniors.

"Leadership, absolute leadership and dedication, and it's been a joy coaching them young men. An absolute joy," Bass said.

The win gives the Falls a final record of 7-1. They will host a playoff game against Hutchinson Tech next Saturday. The loss pushes Orchard Park to 4-3. They host Williamsville North on Friday.