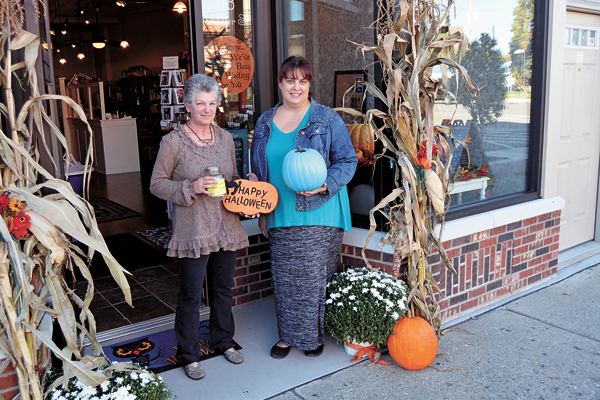 Michele Krienbuhl (left), owner of Michel's Motif on Webster Street, holds a jar ready to accept donations for Twin Cities Meals on Wheels at the first "Boutique Bash." Jars will be placed at each participating business during the event. Heather Kalisiak holds her teal pumpkin that she will place in her business's window (Martinsville Soapworks) during the trick-or-treat event and "Haunted Sidewalk Sale" to raise awareness about children's food allergies.

Halloween is fast approaching and, to help celebrate and support charitable initiatives, a group of business owners on Webster Street are coming together to host two new events.

Coming up this Saturday, Oct. 15, a trick-or-treat and "Haunted Sidewalk Sale" event will take place from 4-6 p.m. on Webster Street. Children and their families can walk along Webster Street to collect goodies while wearing their Halloween costumes, as well as browse goods offered by local businesses.

Event coordinator and member of the Downtown Merchants Association of North Tonawanda Michele Krienbuhl said, "We decided to kind of expand on the 'Haunted Harbor' and offer a few hours of quick sales to the public and let them bring the kids ahead of time, and they can trick-or-treat through all the merchants."

"Haunted Harbor" is hosted by the North Tonawanda Youth, Recreation and Parks Department, along with the T-NT Gateway Committee, and will take place from 6-8:30 p.m. Saturday at Gateway Harbor. Children are able to trick-or-treat along the harbor and join in activities.

During the sidewalk sale, weather permitting, merchants will set up displays outside their shops on Webster Street (or simply host their sales indoors). Balloons will indicate which stores are participating in the event and most of the shops are already decorated for Halloween.

While trick-or-treating down Webster Street, patrons will find a teal pumpkin in Heather Kalisiak's shop, Martinsville Soapworks. Kalisiak, also a member of the Downtown Merchants Association of North Tonawanda, will be offering non-food items to trick-or-treaters in support of the The Teal Pumpkin Project put on by foodallergy.org.

"If you see a teal pumpkin on a doorstep, that means that the household has non-food because it covers all kinds of allergies," Kalisiak said. "Both of our nephews have severe peanut allergies. So we always make sure we have not just candy, but we have non-candy treats. We have little (Halloween-themed) rubber ducks."

She said because the merchants are hosting the event before Halloween, she hopes to get the word out about The Teal Pumpkin Project in time to raise more awareness about food allergies before people stock up on treats for Oct. 31.

Krienbuhl has previously held her own "Boutique Bash" within her store. However, after speaking with members of the merchants association, "they decided it would be a really good thing for the Webster Street businesses to give back to the community. So we decided it would be a local organization and (for this event) ... we're giving it to Meals on Wheels in North Tonawanda."

Patrons can donate $1 for a passport and, at each store they shop at, their card will be punched.

"When their card is completely full, they go in for a drawing for a Webster Street basket," Krienbuhl said. "All the merchants involved are going to donate something into a basket, so it will be a really nice giveaway, especially for this time of year they can use it for holiday shopping."

Shoppers can also round up their bill to the nearest dollar amount to donate to the Twin Cities Meals on Wheels (formerly called North Tonawanda Meals on Wheels). For example, Krienbuhl said, if a shopper's bill is $10.50, they can round it up to $11 to donate 50 cents.

Businesses will also be accepting canned food donations for the Interchurch Food Pantry at 100 Ridge Road in North Tonawanda.

Twin Cities Meals on Wheels Coordinator Pam Hill said the "Boutique Bash" came at the right time because the organization was unable to hold two of its usual fundraising opportunities this year.

"We were thrilled," Hill said. "I think it (the event) is a win-win for everybody because it gets our name out there, it provides us with some of our operating capitol and it also introduces the community to these businesses that are participating in this."

Hill said Twin Cities Meals on Wheels services people who have trouble cooking or shopping for themselves, helping them to keep living independently.

Daily hot dinner meals are offered as well as a two-meal program. Meals for those dealing with diabetes and dialysis are also options for those in need.

Hill said donations from the "Boutique Bash" will go toward the organization's operating expenses, including the cost of food.

"I think it's a good thing that the community sticks together and gives back to each other," Krienbuhl said.

For more information on Twin Cities Meals on Wheels, call 693-1663 or visit www.tcmow.com.