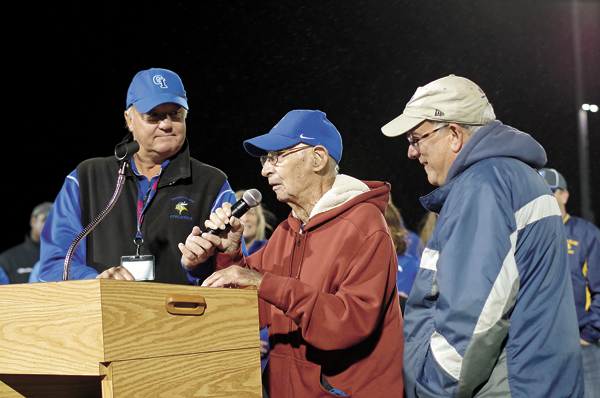 The Father of Viking Athletics now has a lighted welcome sign in his honor at the school district fields he designed.

A new sign and archway identifying the sports fields behind the Grand Island High School campus on Ransom Road as the H. David Myers Athletic Complex were dedicated Sept. 30 during the homecoming football game. Myers, the 97-year-old former athletic director and first male teacher in the district, was on hand with his sons to receive the honor.

Current Athletic Director Jon Roth said Myers promised last year that he would be in attendance when the sign was finished.

Roth said he was "honored and proud to officially dedicate the fields that you started in 1963, the H. David Myers Athletic Complex."

The dedication ceremony took place during halftime of the homecoming game at the 50-yard line on Gene Masters Field, named after the first coach Myers hired at the high school in 1963. The event was attended by district administrators, fans, and alumni. Dick Crawford of the Grand Island Alumni Association, on behalf of the alumni - "over 10,000 students strong" - thanked Myers "for your dedication and leadership of Grand Island athletics." He called the complex a tribute for the things Myers did in creating the Grand Island sports program.

Myers, a gym teacher and the first athletic director, oversaw the program from its foundation. He designed the complex, hired the coaches and bestowed the name Vikings on the teams.

"I came here in 1948 and never left. I fell in love with the kids back then," Myers said, before he noted the impact of the late Veronica Connor, then supervising principal of the district.

"I had the best job in the world for 35 years. I couldn't wait to get here in the morning. I was here at 6 o'clock every morning for 35 years, and after we got a high school, I was here every night for 25 years," he said.

To those who had a hand in the dedication, Myers said, "I want to thank them from the bottom of my heart."

Myers had a ready answer if someone asks, "Who was H. David Myers?"

"You just tell them that he fell in love with Grand Island, and he was a teacher here," Myers said.