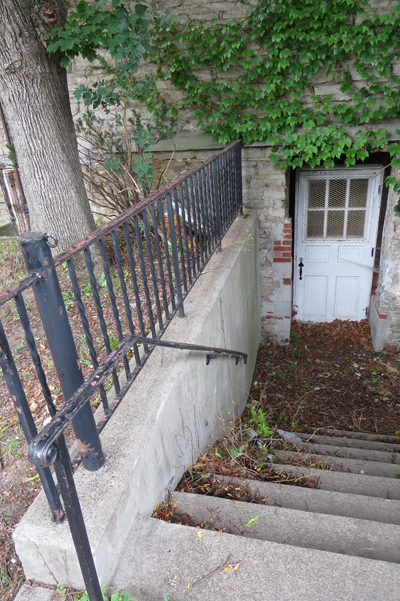 Pictured is the basement access point in question. The HPC expressed concern the subdivision would divide the stairs from the entryway.

She objected to the line of questions she received Monday night, and was dismayed the HPC asserted her Frontier House subdivision drawing was incomplete.

"For a month now, I've been saying, 'Are you sure that's all?' Because it seemed like kind of basic. 'Do you want anything else? I'll bring you anything you need.' They're like, 'No, no, no. That's it,' " Sheehan said.

Frontier House President Alan Hastings said, "It kind of came out of left field for us. We wanted to make sure that we had everything we needed, and so we were very thorough in preparing it, and talking to everybody we needed to talk to."

In August, Sheehan and Alan Hastings met with members of the Village of Lewiston, including HPC chairmen Harry Wright and Ken Slaugenhoupt, and Deputy Mayor Bruce Sutherland.

"I met with Harry and said, 'I'm considering subdivision. I understand you're part of this committee. How would you guys feel about that?' " Sheehan said. "He said, 'Well, meet us over there.' So, him, Ken and Bruce and Alan and I went to the Frontier House. We did a little walk around, showed them what we were thinking, told them our reasons wanting to be able to drop the price and all those things. And they gave us their verbal support.

"We had a drawing there. We made notes on it. We looked at everything, and they gave us their verbal support."

At the HPC meeting on Monday, the commission voted to table the subdivision application.

"We don't have enough information to vote on this," HPC member Jim Fittante said. "And right now, as we see, there's no parking for this building. We have to make sure that it's viable to the historic preservation of that building."

"As an advocate for the building, as it sits right now, and the entire piece of property, it has a maximum potential. And every time you cut the property line down and restrict parking, restrict access - restrict anything - you reduce the potential for that reduced property," Slaugenhoupt said. 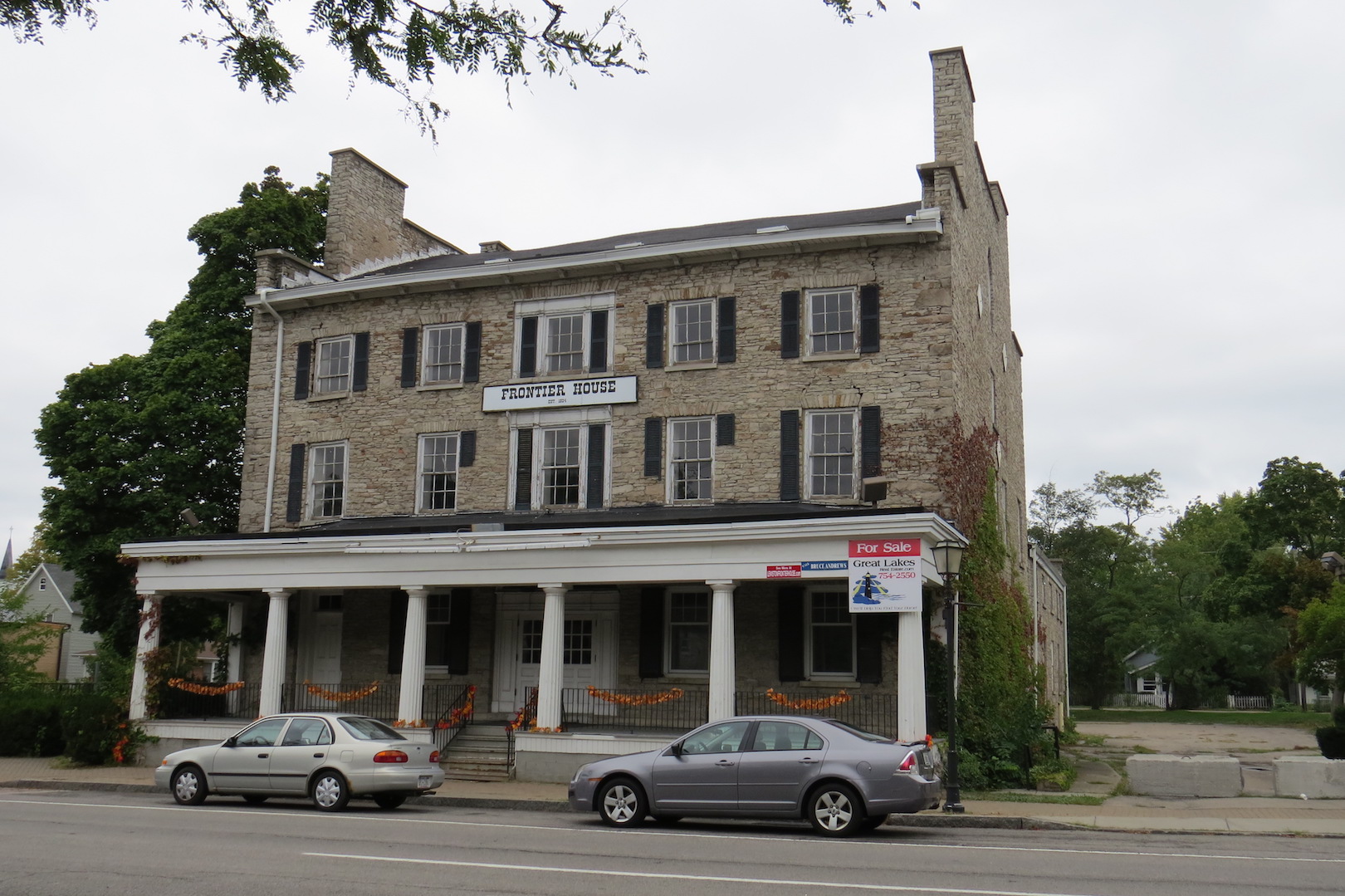 Sheehan said he was the one, in particular, who told her how to prepare the drawing. At the meeting, Slaugenhoupt said, "When we first looked at this, the permanent easement going to Ridge Street was an extremely important thing that we'd been discussing. When this came back in with that missing, that was also a large backward step."

Slaugenhoupt explained the drawing cut off access to the Frontier House's west side basement entry. He said keeping that access open to a potential buyer is "crucial."

"If that basement entrance is clear, and the easement back to Ridge Street is there, I would personally be comfortable with doing a certificate of appropriateness for the subdivision," he said.

HPC member Lee Simonson also asked to have the property extend to Ridge Street, and to include what he called "the appropriate number of parking spaces."

Slaugenhoupt said, "My interest is seeing the building rehabilitated and used - and made a life force center for the village. If it's done on a small lot, so be it. I'm all for that. I have absolutely no concerns with approving or suggesting approval of a certificate of appropriateness for a subdivision. But I just can't get by the fact that, if we gave it to you now, I know we're going to face this discussion again."

Wright said Sheehan was told the HPC wanted a Ridge Street easement, but chose to omit such detail from the drawing.

On Thursday, Sheehan said, "They still, at this stage, can't tell me what I need. Is that easement something they would like to see, or is it required? If it is required, who's it required by? What board? Where's the code for that?"

Sheehan said a relative of Slaugenhoupt's was initially contacted to provide the drawing, but couldn't guarantee it would be ready in time for the HPC meeting. As such, she said, Hastings Niagara opted to go with another surveying company.

Slaugenhoupt is a retired land surveyor. He said he had not been privy to any conversations involving the creation of the drawing, nor had he seen it in advance.

This, too, didn't sit well with Sheehan. She explained, at the August meeting, "before I left, I said, 'Listen, gentlemen, this is very premature. Please keep this between us until we make a decision on whether or not this is something we wish to pursue.

"I went home that day, and got a phone call from Rocco DelGrosso, who I've never spoken to in my life."

DelGrosso works at an Erie County design and remodeling company. He is credited as a key contributor to the Historical Association of Lewiston's Tuscarora Heroes Monument.

Sheehan explained, "(DelGrosso) said, 'Hi Stacey. Harry Wright gave me your number. He called me and told me that you're looking to subdivide the Frontier House, and I'd like to introduce myself.' "

She said Wright proceeded to call her and ask for the keys to the Frontier House. In a voicemail message, Wright said he had someone who was interested in seeing the inside of the building, and that he intended to provide a tour.

DelGrosso, Sheehan and Hastings said, made an offer to purchase the Frontier House and a portion of the parking lot. With no certificate of appropriateness, Hastings Niagara deemed the offer premature, and allowed it to expire.

"I think that the fact that we didn't respond to that offer is the reason we got shut down so hard," Hastings said.

Sheehan alleged that decision didn't sit well with Wright. She claimed an unusual request to install an elevator in the Frontier House - something not previously discussed at village meetings - was an indication Wright and the HPC do, in fact, have a preferred buyer in mind.

When asked if that is the case, Wright said, "(DelGrosso) called me one time and asked me if I had any figures on cost and what have you." Wright said he approached Sheehan for answers.

He dismissed the notion of any sort of side deal.

"If (DelGrosso) walked in the door right now, I don't think I would remember him. So, I didn't really have that much to talk to him about. ... That's 100 percent wrong. I could care less if he got it, or anybody got it.

"The reason I voted (to table) was there was (supposed) to be an exit or entry out to Ridge (Street). ... Then they put the property line right through the access steps to the basement. ...

"I have no relation with Rocky at all."

Sutherland said, to his knowledge, Wright doesn't know DelGrosso, and they're certainly not in league together. He said that's misinformation.

Simonson said he talked to Sheehan and said, "From my point of view, there was no deep, dark conspiracy. There was just a lot of supposed intrigue about this whole thing."

Sutherland said he understood where the HPC was coming from in tabling the subdivision application. Moreover, he said, "I think the Historic Preservation Commission, right now as it stands, have nothing but good thoughts in saving that building - however, however, it gets saved. I think they're up for anything, if it will do that."

Sheehan said, "At the very least, they need to establish their criteria, define their role, and, most importantly, implement a basic code of conduct to prevent the appearance of impropriety."

The HPC was formed at the beginning of the summer, and just this week completed its state-mandated training.