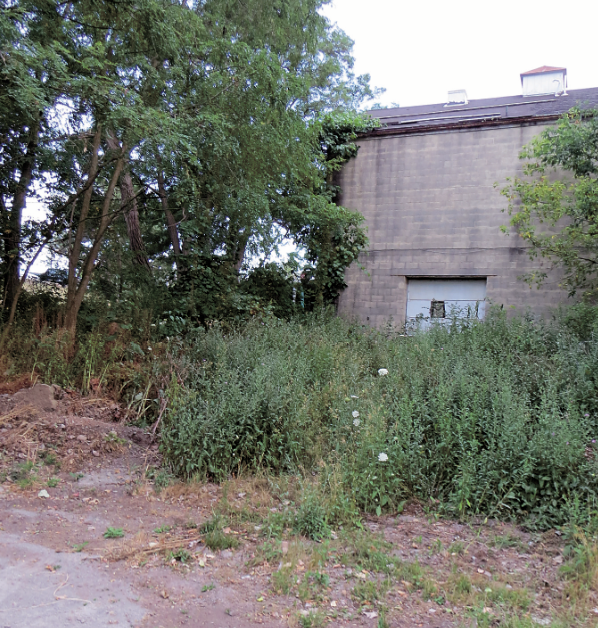 Pictured is the Ellicott Development property to be considered for environmental remediation.

In a July 19 email to NFP, Ellicott Development CEO William Paladino wrote there "is contamination on the site which was always public record and we always intended to clean up. You are also correct that we are looking at entering this site into the brownsfield Program."

Michael Hinton, of DEC's Region 9, is project manager for this application and work plan. Speaking in general terms, he said, "What the brownfield does is they develop contaminated properties. They're eligible for certain tax credits down the road. ... Whether they will do an investigation, and depending on what they find and how much cleanup is required, works into what kind of tax credits they get after the development is done - however long it takes."

Speaking of Ellicott Development, Hinton said, "They submitted some preliminary sampling, which indicated that there is some contamination there, basically from old petroleum from the tanks that used to be at the gas station on the corner.

"They'll probably get in, because there is contamination."

If that's the case, the DEC's role "is to work with them to develop the work plan for an investigation, and make sure they're looking for everything that we would be interested in - not just petroleum, but anything else. And then, we oversee the cleanup - make sure they do it - so they're not just getting tax credits for nothing. We make sure that they do it, and they earn their credits."

In an email Monday, Kristen Davidson, a press officer for DEC's Region 9, said, "For a brownfield site to get into the NYS Brownfield Cleanup Program (BCP), a developer needs to show there is reason to further investigate a site for environmental contamination. For example, sites with an open spill needing investigation or where sampling data shows the site exceeds regulatory cleanup objectives to the extent that remediation would be appropriate - may qualify for the BCP. A site must meet other eligibility requirements such as no existing consent order for cleanup of the site, the site is not a RCRA (Editor: Resource Conservation and Recovery Act) permitted Transfer, Storage, or Disposal facility. More detailed information can be found on the State's brownfield cleanup program web page: http://www.dec.ny.gov/chemical/8450.html."

On a separate DEC website page, the plaza project is described accordingly (broken into paragraphs for readability):

"Location: The Site, including three (3) adjoining parcels, is located in mixed use residential and commercial area of Lewiston. The Site comprises the majority of the eastern portion of the block between Center Street and Onondaga Street along N. 8th Street.

"Parcel 2 - one (1) building (Building 3) is present and associated parking areas. The northern portion of the Site is currently vegetated.

"Land Use surrounding the Site is a mixed use of residential and commercial, with residential located adjacent to the site north across Onondaga Street, east across N. 8th Street.

"Past Use of the Site: Past uses of the Site as an agricultural operation, automobile service and filling station, junk yard, commercial cleaners (suspect dry cleaning) and former rail lines, has contaminated the Site. Petroleum contamination was first discovered on the Site in 1986, related to NYSDEC Spill No. 8600162, which discovered petroleum contaminated soil and USTs. Additional petroleum impacts and USTs, were discovered in 1999, as evidenced by NYSDEC Spill No. 9975429. Additional petroleum impacts were detected during subsurface investigation work in 2015, which required that the NYSDEC Spill No. 1505941 be opened for the Site. Former junk yard, agricultural, and rail lines operated on-Site and have impacted on-Site soils with certain elevated VOCs, semi-volatile organic compounds (SVOCs), metals, and PCBs exceeding Part 375 Residential Use, Commercial Use, and Industrial Use Soil Cleanup Objectives.

The listing notes contamination on this site was first discovered 30 years ago, and attributes the impurity to past occupants/uses.

Paladino said the problem area is near the former pizzeria, which is on the corner of Center and North Eighth streets, headed toward Onondaga Street.

In an email Monday, Village of Lewiston Engineer Michael Marino said, "Typically I would expect that we would have little, if any involvement if the work is contacted to the site. It's typically between the DEC and property owner."

About 35 residents - some local business owners - met July 17-18 to express concern that the brownfield cleanup program designation would remove the multimillion-dollar plaza project from the village tax rolls.

In the same email referenced earlier, Paladino responded, "You are incorrect that we will not be paying village taxes. Brownsfield tax credits are income tax credits we use personally not credits against property taxes."

Speaking of brownfield cleanup program designation at a Village of Lewiston Zoning Board of Appeals meeting on July 21, attorney Sean Hopkins, representing Ellicott Development's plaza project, said, "Most importantly, from the perspective of not only this board, but from the village's taxpayers, that does not qualify Ellicott Development, or any other party in New York state, for a property tax abatement. That is simply not the case. The economic benefits that you may receive from the DEC are in the form of (income) tax credits that go back to the developer."

7712 Group LLC submitted the DEC application. The limited liability company is located at Ellicott Development, and under the auspices of the full-service real estate management and development company.

To find the plaza project page on the DEC website, visit www.dec.ny.gov/chemical/60058.html. Under the "Where to Find Application Information?" section, click on the "Environmental Site Remediation Database Search Page." The site code is C932168.

It's not expected the BCP will impact the Village Board's timetable. Trustees are expected to issue a declaration of impact on the plaza's State Environmental Quality Review Act findings on Monday, Oct. 3, and then issue a final vote on the project two weeks later.