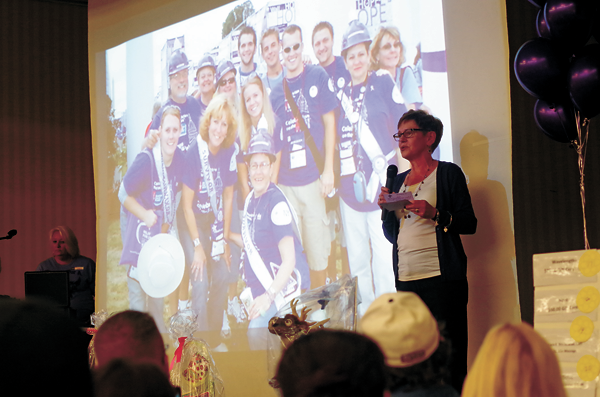 Mary Dunbar-Daluisio speaks in the Radisson ballroom on Sept. 17 during the Wishes for a Warrior fundraiser in her honor. (Photos by Larry Austin)

Islanders turn out for epic fundraiser

Islanders turned last Saturday's Wishes for a Warrior event for Mary Dunbar-Daluisio into the mother of all fundraisers.

Filling the ballroom at the Radisson Grand Island, the event supported the longtime chair of the Grand Island Relay For Life, who is taking a leave from work at Fuccillo Automotive Group while she battles carcinoid tumors. Her co-workers and family and friends decided to return the favor and hold a fundraiser for her.

Jane Dent of the American Cancer Society, who supported many Relays chaired by Dunbar-Daluisio, said "this is the largest fundraiser for a person that I've ever, ever, ever been to. It's phenomenal the way this community always consistently pulls together for each other."

Dent started volunteering with Dunbar-Daluisio 14 years ago and called her "the survivor whisperer, because when Mary meets someone who is a survivor, she brings them into her fold like a mother and takes care of them throughout the journey."

Shannon Boreali and her mother years ago hung the nickname of Queen Mary on Dunbar-Daluisio. Boreali said it's hard to find someone in town who doesn't know the Island dynamo.

"At Relay, she was always the person taking charge, and making sure everyone is taken care of, and always putting herself out there," Boreali said. "She looks over everyone like a queen should."

The roles were reversed Saturday. Dunbar-Daluisio told the crowd that she always finds joy in giving, and that Wishes for a Warrior was a chance for others to experience that joy themselves.

"It's great to be able to give back a little bit of what she's given to so many people," Boreali said. "She's given so much that we can never repay her, but it's nice to be there to support her through this difficult time."

The people at the fundraiser were just some of those who Dunbar-Daluisio had helped in her lifetime that included a decade as co-chair of the Grand Island Relay For Life, an event that has raised more than $1 million for the American Cancer Society.

"Mary had such a big impact on my life," Boreali said. "She came into my life at a difficult time and has just changed my life for the better. So many people have been touched by her work, and to see all those people coming out now to support her, it's really great to see."

Dunbar-Daluisio spoke on the stage in the Radisson ballroom and told the story of when she was about to enter school for the first time, and she was warned she absolutely had to be able to tie her own shoes. When she gets to Huth Road School, she soon discovered in the coatroom that not all the children had mastered that art. She immediately took action, a skill that she would use all her life.

"So I lined them all up, I tied all their shoes," she said. "Got asked every day when I came out of the coat room, 'Why are you the last kid out?' "

It was the beginning of her service to others.

"I've never done anything in my life to any one of you expecting anything in return, ever," she told the hundreds of people in attendance. "Everything that I've done, I tried to do for the right reason, and I guess it all works."

Though she suffers from a carcinoid tumor that have now prevented her from working, Dunbar-Daluisio illustrated that the judgments of the Lord are true and righteous altogether.

"Obviously God's plans of bringing you all here and into my life only goes to show you that his plan is far better than any one that we could ever think of," she said.