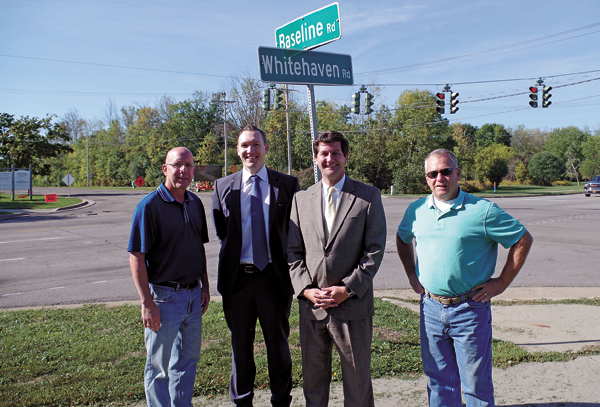 An estimated $1 million road project on Baseline and Whitehaven roads is nearing completion.

At a press conference Sept. 16, Erie County Executive Mark Poloncarz, Town Supervisor Nathan McMurray, and town and county highway personnel discussed details of the ongoing project that has necessitated lane restrictions on two of the most heavily traveled Island roads.

In total, the cost associated with these projects for Baseline and Whitehaven "will easily exceed $1 million," Poloncarz said, estimating a cost of $400,000 to $500,000 to do one mile of road at two lanes.

"But it just goes to show why it's not always easy to do as many miles of roads as you like because it is very costly," he said. Poloncarz praised the county Department of Public Works and the Grand Island Highway Department for their efforts.

"This entire season we've been able to do a tremendous amount of roads, over 100 miles of roads on the oil-and-chip schedule," he said.

"But you can't do that on heavily traversed roads, especially in (a) suburban environment," Poloncarz said. Instead, both roads are undergoing a mill-and-overlay process, with .8 miles of Baseline Road between Whitehaven and Alvin roads nearing completion, and 1.6 miles of Whitehaven Road between Stony Point Road and the New York Thruway overpass scheduled for resurfacing Sept. 26, according to the Erie County Department of Public Works website. Whitehaven Road work began Sept. 19. Charles Sickler of the Erie County Department of Engineering said lane restrictions would be in place, but no detours.

The mill and overlay will involve ripping off the old top layer of the road and replacing it with a new layer. At the press conference in the Town Commons at the corner of Baseline and Whitehaven roads, Poloncarz noted 5,700 vehicles that traverse this section of Baseline on a daily basis. The project is being completed by personnel from the Erie County Department of Public Works. On Whitehaven, 5,300 vehicles per day traverse the two and sometimes three lanes. The 1.6 miles of road on Whitehaven is lumped in with a project that a contractor will complete along with a significant portion of Eggert Road in the Town of Tonawanda.

"Weather permitting, this section of Whitehaven should be finished by Sept. 26, so it will basically take a week to complete that project from the time that it's opened," Poloncarz said.

Erie County owns 1,200 center-line miles of roads, of at least two lanes. Poloncarz said if county roads were made into a one-lane highway, it would reach from Buffalo to the Pacific Ocean.

Poloncarz thanked the county partners, among them the GI Highway Department, for its help. "Because when it comes to working on roads, snow-plowing of roads in the winter, Erie County government cannot do it all. We have to rely on our partners in government to assist us, and we do that often," Poloncarz said, noting the sharing of supplies, employees and equipment between governments.

Supervisor Nathan McMurray thanked Poloncarz and echoed the county executive in praising Tomkins and Crawford, who McMurray said "collaborate well with the county."

"As supervisor, I haven't seen any issue come up more than the issue of roads," McMurray said.

McMurray called the project and "investment in Grand Island."

"We can't overemphasize how thankful we are for that," McMurray said.

Poloncarz also praised the "hard work and advocacy" for the Island of Erie County Legislator Kevin Hardwick, who represents the town in the legislature.

"It just goes to show that by working together we can create a better community and ensure that our transportation needs are met," Poloncarz summarized.