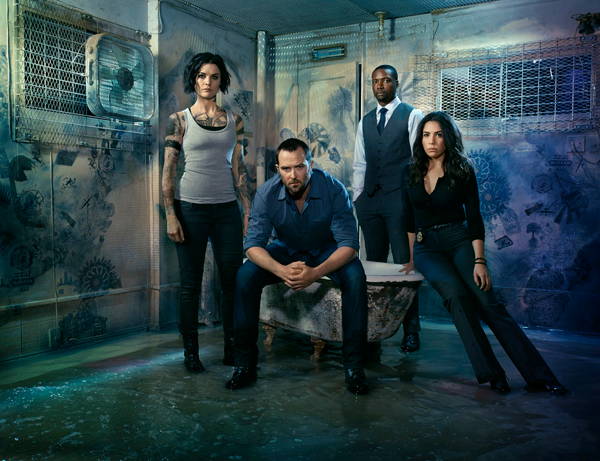 Go to the bathroom early, put your phone down and get your snacks ready the night before, because, if the first episode of "Blindspot" is any indication, the second season isn't going to provide any dull moments.

NBC's breakout hit of a season ago revealed Jane's real name (Alice Kruger, but you can call her Remy), a new boss (Emmy winner Archie Panjabi's Nas, head of Zero Division) and a newly named enemy: the villainous Sandstorm. For her part, Jane, now a triple agent for the FBI, made known her role in the disappearance of Tom Carter, the death of Bethany Mayfair, and the deception of Kurt Weller. Oh, and Jane has a mother, Shepherd, and a brother, Roman, and they're heading Sandstorm, the group that sent her into Times Square to infiltrate the bureau.

A whole season's worth of goodies - and that was only the first hour.

"Holy $hit; it's good, right?" Audrey Esparza said in a phone interview prior to the season premiere. "It read so well!"

The actress, who plays FBI agent Tasha Zapata, said, "I haven't see it yet, but I read that script, and I was like, 'Yeah. Season two's going to be really good.' "

A half-dozen episodes into the shooting schedule, Esparza said, "I feel like season two, much like the show, we jumped right in, headfirst. I know who I'm working with, and trust the actors and the team around me.

"We're definitely pushing boundaries. I think season two is so much more exciting, mostly because we have a shorthand. We've worked out all of the bumps of season one."

"NBC and our creators, they hire great actors that are really fun to watch, and the stories are great," she added.

In one of the season premiere's more surprising and comical moments, Zapata shoots Jane to make it appear as though the tattooed heroine had been captured, tortured, and escaped the clutches of a rogue Sandstorm agent.

In the first season, of course, Zapata was unsure of Jane, didn't really trust the new addition to the team, and, at one point, was keeping tabs on Jane for Tom and the CIA. Zapata had her own issues, of course. Her gambling debt led her to make the shady deal and temporarily undermine her squad.

Toward the end of the season, Zapata rallied, returned to fighting with her team, and learned to like (well, tolerate) Jane.

In the following Q&A, Esparza talked more about the second season, her character, and what makes "Blindspot" different than other heavily marketed concept shows that didn't see a second season. 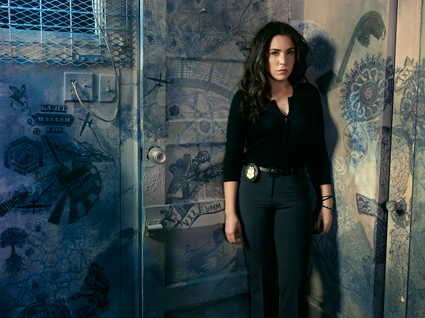 BTS: So, you just kinda shot Jane. What's up with that?

Audrey Esparza: Twofold. She asked for it - both literally and figuratively. And I think that Tasha could see that Weller was letting his emotions get in the way of the work. And, at the end of the day, Tasha is an FBI agent. She did what she thought was right. And I think and know and believe that Jane appreciated it.

BTS: It's exciting to start a new journey with these characters. Martin Gero said the show is heading into a different phase. What can you tell me about the second season and where all of these characters are going?

Audrey Esparza: Our creator, Martin Gero, very smartly said that, for him, "Blindspot" is a series of novels, with the characters that we learn about in the first book. And I'd say that episode one of season two is the final chapter of that first book.

We're starting with the same characters, new adventures, and I think we're going into darker territory. We're learning more about the characters - why they are the way they are; who they are; the choices that they make. And I think one of the great things about working on "Blindspot" is I'm fortunate enough to play a character and be around other characters that have to live out the consequences of their actions - both good and bad.

And I think another really exciting thing about the first episode is that it was directed by our creator, Martin Gero. So, the audience (got) to see the world of "Blindspot" through his eyes, without any kind of a filter, or without a second artist coming in between. 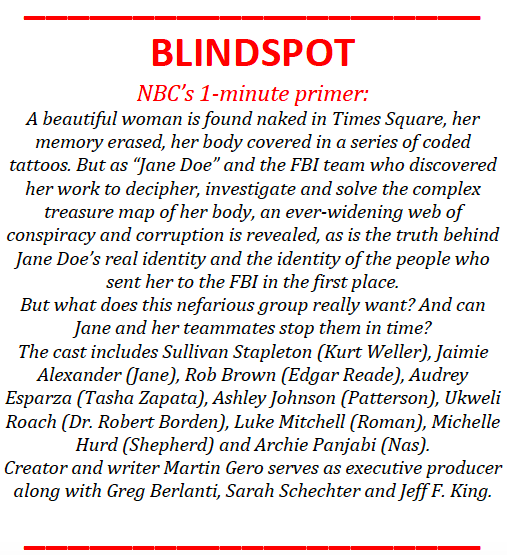 BTS: Take me back. You hear NBC has a show wherein a woman is placed in Times Square with no memories and covered in tattoos. What made you buy into the concept?

Audrey Esparza: Two years ago, I was an unemployed actor going through pilot season, and reading script after script. After a while, some of them start to look and sound the same. And then I came across this show called "Blindspot."

I read it and, in the pilot, my character, Tasha, isn't in it too much. But I knew that there was something special, and I could see that Martin had a very fresh, real and honest take on women, and on the female perspective, and he made no apologies for his female characters. And that was something that, very much, attracted me to the script.

And, like most actors, I got into the audition room, fought like hell, and got the part. I auditioned for it. It was a dream come true in a lot of different ways.

BTS: Tell me about this dream come true, and a little bit about Tasha. We know she's a good agent. She had a gambling problem. She initially compromised Jane, but then did the right thing and returned to the team. It seems there's a lot of layers here. What do you like about her, and how have you worked with the writers to bring her to life?

Audrey Esparza: One of my favorite things about Tasha is that she is incredibly flawed, incredibly human, and contradicts herself constantly. I think, like most of Martin's characters, everybody is trying very hard to do the right thing, and do what's just. But I think what is just, moral and legal don't always line up. And it's something that she is always battling.

BTS: Your show did well in its first season. NBC's recently had some interesting, high-concept shows with a lot of promotion and backing, about three or four now, that, for whatever reason, didn't work. Why do you think "Blindspot" worked? Why did it resonate with the audience?

And I have to also give NBC a huge amount of credit. They let us be brave, as storytellers, on "Blindspot." I think, especially this coming year, the audience can look forward to some storylines that I read, and I was like, "I'm so proud to be a part of this." And I'm so proud of NBC, because there's a constant conversation of the difference between network television and cable television. And I think a good show is a good show. And I'm on a good show.

BTS: The first season was so action-packed, and so twisty-turny. When they say, as I'm sure they did, let's ramp it up even more in season two, how do you prepare for that? In terms of wrapping your mind around these scripts and preparing for all the physical challenges that the role requires, how do you top that first season?

Audrey Esparza: (Laughs) I hadn't thought about it. You just said it, and now I'm stressed out!

Audrey Esparza: (Laughs) You know, honestly, I haven't thought about it. I mean, in terms of preparing to do physical work, I have, I think, I feel responsible in that I'm playing a female law enforcement (agent) - a woman that works in the FBI - and I've been privileged enough to meet those girls. So, the least I can do is get in the gym, and look like them, and try my best to keep up with the action work.

•"Blindspot" airs at 8 p.m. Wednesdays on NBC. Find the show online, and connect with its characters, at www.nbc.com/blindspot. 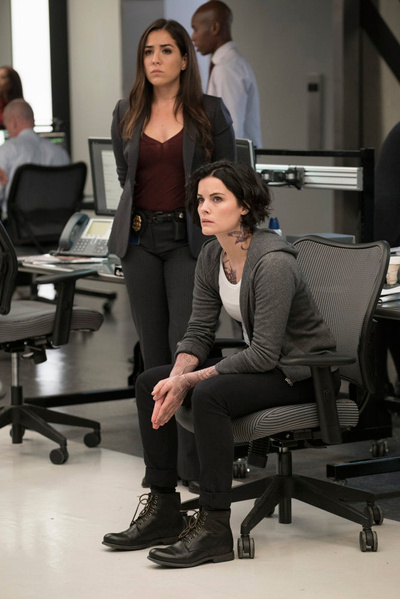 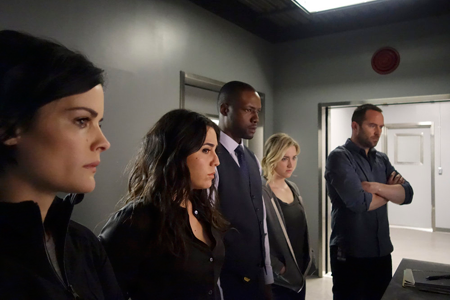