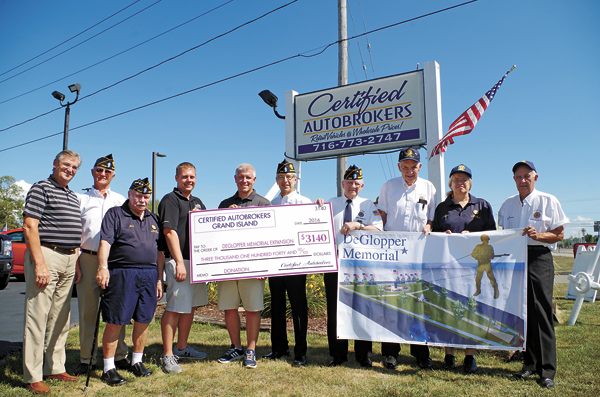 An Island business has made a donation to spark the fundraising drive for the DeGlopper Memorial Expansion Project.

Chris Taylor and Travis Smith of Certified AutoBrokers at 1693 Grand Island Blvd. presented a check for $3,140 to the DeGlopper Memorial Expansion Committee Aug. 19. The money represented the proceeds from a monthlong fundraiser. The company, which just completed a 2,200-square-foot expansion to its retail vehicle sales location, donated $100 to the expansion project for every vehicle sold in July.

The DeGlopper Memorial Expansion Project is a major redesign and enlargement of the DeGlopper Park memorial located at the intersection of Baseline Road and Grand Island Boulevard. A volunteer committee has been at work for more than a year to fund and improve the existing memorial and held a groundbreaking for the project in June, coinciding with the 72nd anniversary of Medal of Honor recipient Pfc. Charles DeGlopper's death in battle during the D-Day invasion.

At the check presentation ceremony Friday, CAB's owners said they were gratified by the response to the fundraiser from the public.

"I thought it was awesome," Taylor said. "Everybody was super-positive about it. We had just an amazing Island response last month, from people that just came by and bought a car here just because they wanted to, that they could have bought somewhere else. They were pretty wonderful in supporting this."

CAB is encouraging Islanders to join the fundraising effort. The company, located near the roundabout at the intersection of the boulevard and Staley Road, has a large rendering of the expansion project in the waiting room and a donation box as well. Supporters are invited to stop in and make a donation to the box anytime (no purchase is necessary).

Certified AutoBrokers donated a check for $3,140 to the DeGlopper Memorial Expansion Committee Aug. 19 in culmination of a monthlong fundraiser to support the expansion of the park at the corner of Baseline Road and Grand Island Boulevard. The park honors Medal of Honor recipient Charles DeGlopper and Islanders who lost their loves ones in war. At the check presentation last Friday were, from left: Deputy Town Supervisor Jim Sharpe, veterans Ray DeGlopper and John Forrest, Travis Smith and Chris Taylor of Certified AutoBrokers, and veterans Peter Kuszczak, Joe Synakowski, Garry Deutschlander, Judy Snyder and Al Prame. (Photos by Larry Austin) 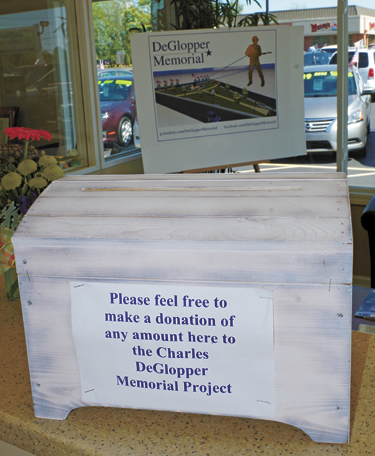