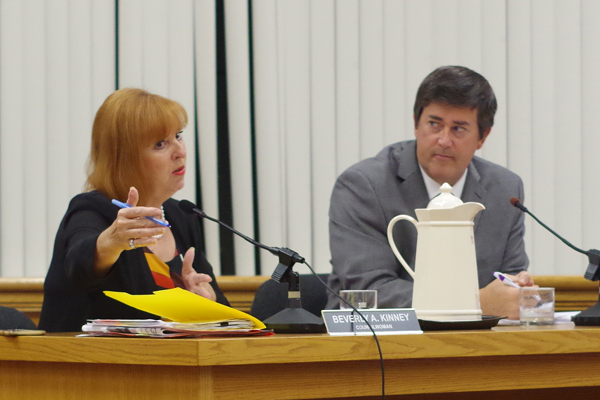 The Grand Island Town Board voted Monday to support an alternative option to the state's West River Connector Trail project.

The latest proposal from the State Office of Parks, Recreation and Historic Preservations calls for closing West River Parkway to cars and turning it into a multi-modal trail. The project would use state and Niagara River Greenway funds.

During the Aug. 15 meeting at Town Hall, the board voted 3-1 (with Councilwoman Bev Kinney voting no) for a motion in favor of a West River bike path, Option 4, located on state land immediately adjacent to town property, as close as feasible. Written and moved by Councilman Mike Madigan, Option 4 would leave the parkway alone. The plan was supported by councilmen Ray Billica and Chris Aronica.

Town Supervisor Nathan McMurray, a supporter of the state's plan to close the parkway, was on vacation and excused from the meeting, but he was a lightning rod for criticism even though he was not in attendance.

Jim Mazza of West River Road said during the public comment portion of the meeting that after the Town Board voted 3-2 (McMurray, Kinney) at its Aug. 1 meeting to oppose the state's preferred plan, the supervisor "wrote to the state on our town letterhead suggesting that the vote was not indicative of what the community felt." McMurray's letter, to Commissioner Rose Harvey of the New York State Office of Parks, Recreation and Historic Preservation, rankled Mazza and many other bike path opponents at the meeting and came as a surprise to other board members.

On letterhead that said "Office of the Town Supervisor," McMurray wrote, "There was a 3-2 vote, which was a weak expression of dissatisfaction with the current draft plan for the West River recreational path. But as you know, our town has been working with your agency on this project for years. There have been many resolutions, and many meetings. The people of Grand Island understand that this is a work in progress - the first draft is never the final chapter. I hope this letter helps you understand that a 3-2 partisan vote should be reflective of a snapshot in time, and not a definitive statement on this project by the people of Grand Island. I have spoken with many, many citizens - including citizens who live on West River - who support the latest version of the plan, which closes the dangerous, and redundant parkway.

"Further, Congressman Brian Higgins and other leaders support the plan. We therefore urge you to help us prevent any further delays and help us move this plan forward.

"I must echo the words of Congressman Higgins, 'The decision regarding which alternative to pursue for this project will have generational significance. To persist with the extant Robert-Moses inspired, car-centric, wasteful and underutilized infrastructure, opposed to replacing it with this smarter, greener alternative, would be a mistake not soon undone.' There is noise with any project. This hum should be replaced with the sound of bicycles and chattering children on the parkway."

Council members said Monday they were unaware of the letter. Madigan said the letter on GI letterhead "does kind of force our hands."

The state proposal has divided the board and residents. Madigan said the state's tabulation of resident feedback from public input meetings is a split, a very close 60-40 against on Alternative 3, with 10-15 percent against doing anything.

Kinney reported that in the latest option from the state, an update to what was called Alternative 3 presented July 20 at the public meeting at Grand Island High School, does not change the existing duck blinds or permitted docks on West River, and parking lots built into the design are coming out.

"So they are listening," Kinney said of the state.

After the board voted in favor of Option 4, Valerie Funk of West Oakfield Road, who favored such a plan when she spoke at a public meeting July 20 at Grand Island High School, called it "a fantastic idea," likening it to "an extra-wide sidewalk."

During the public comment period of the meeting, Ann Williams of West River Road said the current West River Parkway debate is causing a rift in the community.

"How I feel about the bike path doesn't matter at this point. What does matter is that the issues are being presented in a manner that divides our community," Williams said, calling some rhetoric as "my way or the highway."

She railed against the "accusations and finger-pointing" and said, "Don't allow this town to be torn apart."

Rose Bugman of Whitehaven Road said she was sorry McMurray was not at the meeting because the more she reads his comments on social media "the more divisive I think he's making this Island." She claimed McMurray has called bike path opponents "name-callers, but he seems to be the only one doing it."

"I don't think we should be written off as elitist," Bugman said, and "He's almost rabid about the issue."

Madigan told fellow council members during a work session that preceded the regular meeting that he spent a good part of the day Saturday on West River talking to people.

"In particular bikers. One of the things I heard consistently was we're bookended at either end by bridges that are extremely unfriendly to bikers, and that most bikers avoid that, so the connection is tough," Madigan said. "It's a tenuous one at best."

Madigan said bikers don't ride to the Island, but rather put their bikes in cars and drive over.

Of the connector trail, Madigan said, "The connection is more of a broken link than a connection."

Madigan had wondered at the work session if the trail could have gone anywhere on the Island, rather than on the West River, echoing similar comments made at the July 20 meeting. Deputy Supervisor Jim Sharpe, who ran the regular meeting and work session in McMurray's absence, said Niagara River Greenway money is part of funding the connector trail project, and the Greenway is driven by the Local Waterfront Revitalization Plan which "only covers shores and creeks, but it doesn't cover the highways in the center of town."

Also at the work session, Kinney said she met with Office of Parks, Recreation and Historic Preservation Western District Director Mark Thomas Monday afternoon, who pointed out the American with Disabilities Act has regulations about the paths. Thomas also pointed out to her that the board is concentrating on the biking aspect of the trail, but it is in fact a mixed-use path, for walkers, hikers and the handicapped as well.

At the conclusion of the regular meeting, Councilman Ray Billica advised residents, for or against the West River Connector Trail, "Be civil about it, and it seems like sometimes things aren't civil. I am not looking at Facebook pages. My blood pressure goes through the roof. I am not going to look at that stuff, and that's not where the conversation should be held. The conversation should be held right here, in this room in front of the board that's going to make a decision."