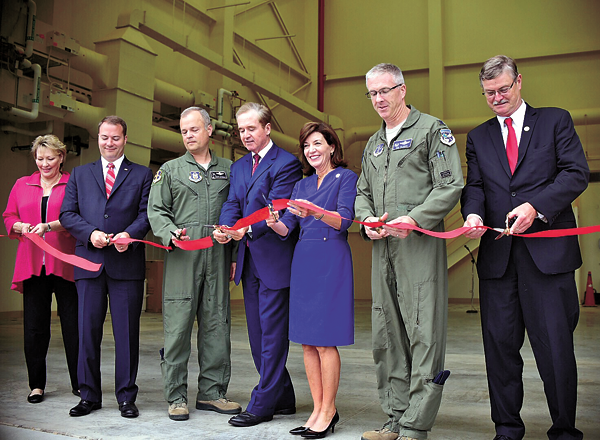 Elected officials and civic leaders gathered Tuesday morning at the Niagara Falls Air Reserve Station to cut the ribbon for a new KC-135 flight simulator facility.
"This 11,250-square-foot facility is slated to house a state-of-the-art simulator, which will have full-motion and visibility and provide a platform to fulfill flight training at a lower cost," said Col. Brian Bowman, 914th Airlift Wing commander, in a press release. "The site can host more than 450 students a year and provide 18 full-time jobs. This building is complete and capable of taking a simulator right away."

The $5.2 million project coincides with the station's new KC-135 mission and is home to classroom space and other meeting areas that would be used to teach students while they train with the simulator.

Bowman said the simulator, which has yet to arrive at the base, will look like a "big box."

"When you actually walk in that box, it's like you're walking in the cockpit of a KC-135," he said. Students will partake in rigorous four-hour training sessions as part of courses using the simulator and facility, which could take from two weeks to two months.

"Everything they do is scrutinized - thousands of items in that four-hour block are covered," Bowman said. "And that keeps them trained, keeps them proficient and keeps them, obviously, safe for flying the airplane."

Using screens and other equipment, students can fully train in the simulator and eventually be "completely checked out as a mission-ready pilot without having flown the actual aircraft," Bowman said.

He noted, the simulator features a database with "every airfield known to man in the entire world." The operators can become familiar with their surroundings in areas throughout the world before actually physically being at their designated location.

Lt. Gov. Kathy Hochul supported bringing the facility to the base when serving in Congress. As the KC-135 is the station's new mission, she said, "It makes sense to have the simulator right here in Niagara Falls." Hochul said the "state-of-the-art, one-of-a-kind, facility (is) ready to accept that mission. So, we're ready."

After the ceremony Tuesday, Bowman said, "I couldn't be more excited, obviously, that this thing is really kicking off well. It's on schedule and I can't ask for more than that."

As for when the actual simulator would arrive, Bowman said, "We will get one of them, I just don't know when."

Funding for the facility was provided in the fiscal year 2013 budget. However, another $25 million was allocated to transfer one of the Air Force's 19 KC-135 simulators to the station in the recent 2017 budget.

Hochul said she, along with Rep. Brain Higgins and U.S. Sen. Charles E. Schumer, among others, have been "fighting" for this project to come to the base.

"We have always been, it seems, at death's door," she said. "And something like this brings back new life." Hochul said the investment made into creating the facility is "a statement from our military that they're going to be continuing investing in this region."