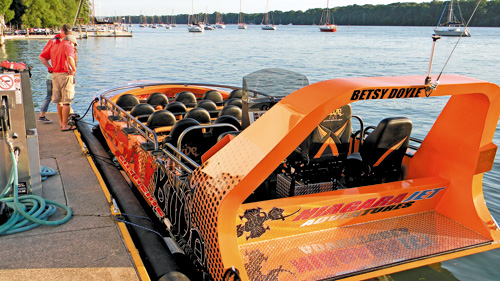 Tensions in Youngstown came to a head Thursday as the Village Board of Trustees held a public hearing en route to a vote on the Water Street multiple bus ban, a measure aimed at managing the volume of bus traffic on the one-lane Water Street strip bordering the lower river.

"The Village of Youngstown is proud of its heritage and proud to be a worldwide tourist attraction and destination," read the law, intended to amend Chapter 232, Article X, of the village code. "Many tourists travel to the village by commercial bus and, since 2013, the volume of bus traffic has increased dramatically. Water Street is a main public access point in the village waterfront and the Niagara River and is a highly pedestrian intensive area.

"Water Street is a steep and narrow one-lane public roadway built decades before the first internal combustion engines were invented. It was not designed or built or designed for buses. The amount of bus traffic currently using the single street creates a hazard to waterfront area pedestrians. Therefore, the necessity moves the Village of Youngstown to promulgate regulations for the safest use of Water Street by all parties."

And so began what became a nearly two-hour public hearing on the issue, held in the heated confines of a packed village boardroom at the Youngstown Red Brick Village Center.

It ended with a 3-1-1 village trustees' vote to approve the multiple bus ban measure - a move that now places the village in the crosshairs of a potential lawsuit -- and the loss of a business.

The session saw more than 40 signed in and nearly 25 speaking. Comments echoed mounting village frustrations over the past several months with Niagara Jet Adventures - a 3-year-old jet boat ride operator that has seen its tourist business flourish, but also place an increased strain on the small village and its residents.

The issue with many who spoke focused primarily on the problem and concentration of idling tourist buses on lower Water Street, the safety concerns of pedestrians using the nearby waterfront park area, the space conflicts with the Youngstown Yacht Club, which shares the same narrow strip, and the impacts on neighboring residents and the community as a whole.

Comments heard were generally in support of Niagara Jet Adventures as a new business and its economic benefits to the village. But also heard were the frustrations of the community over the presence of the idling tour buses on lower Water Street, the continuing non-management by NJA of increased numbers of tourists visiting the community, and the perceived lack of cooperation by NJA to the concerns.

Betty Vandenbosh Warrick called the NJA controversy "a dividing issue between the village and the board." She went on to suggest that some board members were "taking sides" with certain interests and not acting on behalf of village residents.

Lake Road resident Ray O'Keefe told board members the village should be better focused on addressing its growing tourist issues.

"We're here to discuss an issue (the bus traffic problems) that does not exist," said O'Keefe, a YYC member. "If government stops this activity, it disrupts others."

He called Niagara Jet Adventures "a legitimate business" that the village should embrace.

"Their initial goals with the village have not happened. Their earlier commitments have not happened," said Caserta, who called the bus ban measure "a last-ditch effort to get cooperation" from Niagara jet Adventures.

Damen DeCastro, NJA attorney, contested many of the issues presented and spoke of the economic benefits NJA brings to the village.

"There's no rational basis for the proposed legislation, other than discriminating against Niagara Jet Adventures," DeCastro said. "The buses do not block the roads; buses bring tourists to the village, which the village should be encouraging to the benefit of area businesses.

"Niagara Jet Adventures is the only entity that will be affected by this discriminatory legislation."

DeCastro told board members the measure was promulgated, based on the interests of the nearby Youngstown Yacht Club.

"Since Niagara Jet Adventures has been operating, we've been bringing 3,500 people to our location each week. We've taken approximately 1,200 people on the boats. ... These are tourists who want to spend money, and they should have the opportunity to spend that money in the village."

"The village is illegally trying to limit the traffic to Niagara Jet Adventures, while allowing a select few a unfettered access to Water Street," DeCastro said, telling Caserta, Reynolds and the trustees that, should the measure pass, court action would follow, and the company could shut down.

Vanessa Groeneveld, NJA director of marketing and sales, spoke of the economic value NJA brings to the community, as did John Percy, president and CEO of the Niagara Tourism and Convention Corp.

"Niagara Jet Adventures is very welcoming to visitors," Groeneveld said, and told the board members the company supports "more options for its tourists."

Pointing to its economic value in terms of tax money for the community, she likewise expressed fears that NJA "would close down" if Water Street was closed to buses. Groeneveld went on to extend an olive branch, telling the board NJA is willing to work with the village, and it has, but that the village needs to better support a tourist economy.

Resident Donna Huggins said banning the buses from Water Street "was not the answer," but also said NJA has to do a better job managing its tourist traffic, suggesting NJA "needs to be friendlier" to village concerns, particularly as it relates to the influx of tourists. She and others suggested NJA utilize tour guides or have its staff better trained to handle visitors.

Still others spoke on the economic value NJA brings the area, many of them NJA employees. All expressed fears they would lose their livelihoods, should NJA close down.

Eric Gelbin, a NJA jet boat operator, who came to Youngstown from Idaho, spoke on behalf of the roughly 20 NJA employees in attendance. He noted the economic success the company has had, bringing in 75,000 visitors to the area over the past three years, and telling village officials "There are a lot of solutions. Cutting off the buses is not the solution here."

Others who spoke echoed similar thoughts, reminding village trustees of the benefits of having a business like NJA and saying there are better options of dealing with the tourist problems than imposing a bus/traffic ordinance.

"If you pass this law, I think it's a darned shame," said Trustee Tim Adamson as the measure came to a vote. He told members "You're going to face some serious legal issues that will come down on the taxpayers."

Despite the comments, and the threats of legal action by NJA, village trustees went on to approve the bus ban measure by a 3-1-1 vote. It allows for "only one bus operated, stopped or parked on Water Street at a time." Removed was an April 1 to Nov. 1 time frame that would have prohibited bus traffic completely.

Reynolds, along with trustees Tim Lockhart and Stephen Zastrow, approved the measure, while Adamson voted no and Trustee Stuart Comerford abstained.

Following the vote, DeCastro spoke of the uncertain future the company now faces and indicated legal action on behalf of NJA.

"It's an unfortunate result of the village attacking the jet boat, which is in business in the village that is bringing 50,000 people to the village each year," he said. "(It) will face being closed, because we won't be able to bring the patrons here in sufficient numbers to justify the continued operation.

"The village actions today have jeopardized 20 jobs and to the detriment of the taxpayers of the village."

"It's going to cost them," commented Brian Price, who was introduced by DeCastro earlier that evening as NJA's incoming owner.