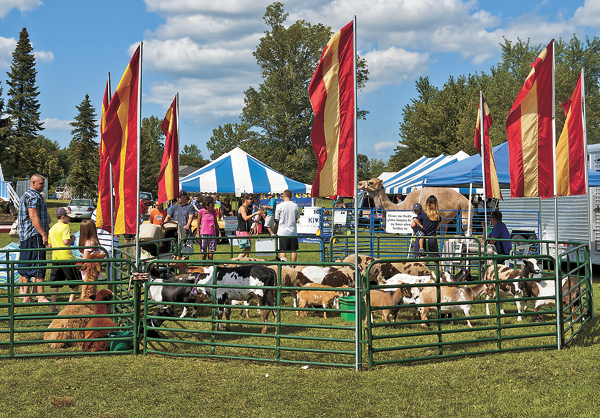 Community to come together for Wheatfield Family Picnic

The event, organized by a group of 11 volunteer Wheatfield residents, is slated for Sunday, Aug. 21, at Fairmount Park, 3185 Stieg Road.

"This picnic is, perhaps, the greatest of town events - a day of simple enjoyment for all who attend," Town Supervisor Robert B. Cliffe said. "There is something for everyone starting with church services, music, great local food, and events all throughout the park. I think that everyone enjoys their time there, especially the kids."

John Donner, Wheatfield Family Picnic committee chairman said, "The picnic is very family-friendly." He added, "It's open to the public. It's free. All expenses, accept for food, are covered by the picnic sponsors."

Donner said the committee works to integrate local organizations and businesses in the picnic, as well as "activities for every generation." He added, "We provide an all-inclusive day for the town residents."

The day will begin with American Legion Post No. 1451 raising the flag at 10:45 a.m. Blessings will be said and Cliffe will speak. Two church services, one Catholic and one Protestant, will take place at 11 a.m. Picnic festivities, including several children's activities, will run from noon until 5 p.m.

"We're very honored to be part of the event," Niagara Alliance Church administrator Melissa Heidelberger said. "Everyone who comes out and volunteers has a great time."

She added the picnic is "a great way for people to come out and know that this is a caring community where everyone works together."

In addition to the kid's carnival, a "kids fest" will feature a bounce house, games and crafts. The Kiwanis Club of Niagara-Wheatfield will host a beanbag toss and children's book exchange, while the Wheatfield Business Association will provide balloon animals.

Hayrides, a rock-climbing wall, petting zoo, pony rides (1-4 p.m.), a gold fish toss game (put on by Cub Scout Pack 833), bingo (2-4 p.m.) and music by Nathan Zarbo will be offered. The Historical Society of North German Settlements will have a display set up with information on Wheatfield's heritage. Mount St. Mary's Hospital will provide blood pressure testing and the Wheatfield Nitros softball teams will hold a basket raffle.

Representatives of local animal-rescue organizations will be on hand to educate eventgoers, as well. Sky Hunter's - Birds of Prey will show hawks, owls and a bald eagle.

"They are one of few groups in this country that are actually allowed to legally own a bald eagle," Zarbo said. "The only reason why they can is because it's injured and it can't fly. Otherwise, it would have been released back into the wild. ... What they're doing is they're educating people with an animal that could not take care of itself."

The Sanborn animal shelter Wild Critters of Niagara County will be in attendance and the SPCA of Niagara will bring animals up for adoption. Members of a greyhound rescue team will offer information on how to adopt the dogs, as well.

The Wheels of Wheatfield Classic Car Show will also be featured.

"There's various classes that you enter your car in and there will be trophies for each class," said Don Dee, secretary/treasurer of the Wheatfield Family Picnic committee. "And the car show entrants will vote for the winners - the people who enter cars themselves will choose the winners." Trophies will be awarded at 4 p.m.

From 12:30-1:30 p.m. the Bergholz German Band (Bergholz Blaskapelle) will perform and, at 1:30 p.m., the Niagara County Sheriff's Office will put on a canine demonstration.

For eventgoers' safety and convenience, Adams Fire Co. will have a tent set up for first aid services (if needed). Town park employees will be on hand to assist with cleanup efforts.

Besides the variety of activities and offerings, several food options will be available throughout the event. Offered will be coffee and Timbits by the Kiwanis Club of Niagara-Wheatfield; chicken chowder from the Bergholz Fire Co; souvlaki and gyro pitas, pizza, hamburgers, sausage and fries from the Meeting Place restaurant; cinnamon almonds, popcorn and candy snacks from the Nut Hut; ice cream treats from Schwan's; hot dogs via the Wheatfield Democratic Club; roast beef sandwiches and corn on the cob from the Wheatfield Republican Club; Chiavetta's chicken dinners by Wheatfield Nitros softball teams; and pop and bottled water by Project Future.

Dee said, "What's special about it is that it's free and it supported by mostly Wheatfield businesses, and ... (it's) one more nice thing (available) for the residents."

Past chairman and committee member Mike Zarbo attributes the picnic's success to both the "core of volunteers who do whatever's necessary to organize the event and, mostly, the people, the businesses in town who donate the money for us to be able to pay for everything."

He added, "Because everything is free, except for the food, you can afford to bring your family there and spend the day and enjoy yourself."

For more information, visit the Wheatfield Family Picnic at
www.facebook.com/WFP.INFO.