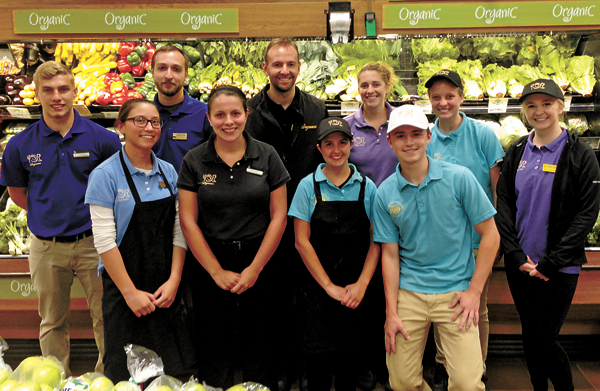 Shown are employees of the Wegmans located on Military Road in the Town of Niagara who are helping organize the first kids carnival to be held Aug. 13.

Wegmans, in the Town of Niagara, will present its first kids carnival from 11 a.m. to 4 p.m. Saturday, Aug. 13, offering a family-friendly event to the community. Additionally, funds raised will benefit the United Way of Greater Niagara.

For $5, children will receive a wristband and be provided access to all stations and activities at the carnival, which will take place in the parking lot area adjacent to the Wegmans' sub shop entrance at 1577 Military Road.

Some of these activities include a beanbag toss, egg-spoon race and other traditional games.

Each year, Wegmans helps the United Way through different fundraisers, and this is another event Sigurdson said he hopes becomes a tradition.

"We are deeply involved and invested in the communities that we serve, trying to make a difference - it's one of our core values," he said.

As a member of the United Way of Greater Niagara board of directors, Sigurdson said, "Oftentimes, United Way helps support not only our customers, but even, at times, our own employees when they are in times of need.

"It's critical that we support an organization such as United Way because ... they do great work in our community, they know where the need is."

Connie S. Brown, interim president and CEO of United Way of Greater Niagara, said, "We think it's absolutely wonderful that Wegmans has chosen United Way, because they realize the importance of the organization in our community."

Brown referenced United Way of Greater Niagara's mission, which is, "To invest in programs that focus on education, health and income that deliver measurable results to improve our community today and strengthen it for tomorrow."

She also quoted its vision, which states, "Greater Niagara is a vibrant region where all individuals and families achieve their human potential through education, income stability and healthy lives."

Brown noted funds raised from the carnival will go toward local programs and nonprofit organizations.

"We service so many programs in the community ... between children and seniors," Brown said.

In addition to supporting the United Way, Sigurdson said the event provides an opportunity for Wegmans employees looking to become "future leaders" at the store to engage and serve the community through organizing and running the event as a team.

Each of the 15 employees plan to interview for the company's management internship program in the fall.

"It's two-fold," Sigurdson said. "We're developing our people and we're also doing something nice for our community and for our customers that will end up benefiting United Way."