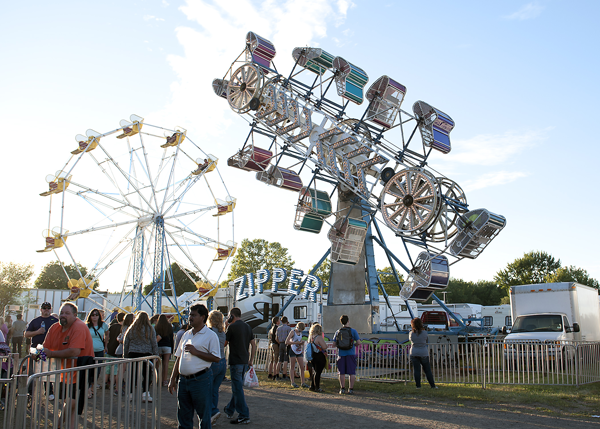 Mid-summer has hit Western New York, and with it comes Cornell Cooperative Extension's annual Niagara County Fair, running all day from Wednesday, Aug. 3, to Sunday, Aug. 7. The fair will feature an array of activities from mountain bike stunt shows to barnyard Olympics in addition to live music, rides, contests and food.

"We like the idea of calling ourselves a 'little big fair,' " said Marc Ducharme, public relations and marketing coordinator at CCE of Niagara County.

Compared to the Erie County Fair, one of the largest in the nation, "We're a smaller fair, but we're the largest youth fair in New York state," Ducharme said.

As in previous years, 4-H Club youth members will be on hand to present several learning opportunities through children's activities, including the showing and presentation of various livestock.

"4-H is always a big draw," Ducharme said. "There's a ton of 4-H activities that are going on all week long."

Healthy cooking demonstrations will be held during the fair, as well as the "Pirate's Cove" bike safety course, which is run through a "Creating Healthy Schools and Communities" grant by CCE.

While learning new skills, children can use their imagination and delve into this year's theme: "Once Upon a Time in Niagara, the Fairytale."

Ducharme said, "We really want to infuse that theme into everything that we do," including through food offered by vendors and activities for children.

Fairytale-themed children's activities will be offered from 1-3 and 4-6 p.m. Friday through Sunday. Children who wear a costume will receive a prize and Page the Book Fairy will be on hand to take photos. A scavenger hunt will also be featured and children will be able to search the fairgrounds to answer questions to eventually be knighted by Page the Book Fairy.

Besides the new enchanted theme, the fair will offer up several other additions, including hot dog and pig races.

"And that's a nice addition to what's happening with 4-H, where you'll have farm animals," Ducharme said.

With youth being one of the major focuses of the fair, activities for adults will also be available. Local business and nonprofit organizations will set up displays on what they offer the community and a farmers market will be held Friday.

The annual wine contest, where representatives from local wineries will show off their products and compete for awards, will take place, along with the first home brew competition.

Another new activity that is competitive in nature will take place at 10 a.m. Saturday, where visitors can watch Lockport resident Michael Weber's attempt to set a Guinness World Record for the most dots in a connect-the-dot puzzle.

Weber designed and made the puzzle, which depicts the Lockport Locks and consists of more than 10,000 dots. While in front of fairgoers, a challenger will attempt to complete Weber's 3-foot-by-2-foot puzzle, while being photographed and filmed. A large flat-screen TV of the puzzle completing itself will be set up for viewers to watch, as well.

"I had to have a public event, that was one of Guinness's requirements, and I thought (the fair) just seemed like the biggest thing going on this year in terms of people," Weber explained.

He said he will sell the puzzle during the fair to raise money for his business, Niagara County Entertainment, which is an event calendar for the entire county.

"It cost more money than I had planned on," Weber said. "So, I had to come up with a product."

That's when he decided to brainstorm something he could sell that was "educational and artsy and informative and promoting tourism."

Ducharme said, "(Weber) showed me the big connect-the-dot map that he created and it speaks for itself - there's a lot of dots. ... And it's a local landmark."

Weber said this is his first attempt at making a connect-the-dot puzzle and, "After I get through this process, I (am) going to make a puzzle for every town in the county - so there (would) be one of Niagara Falls, maybe Fort Niagara, Wilson Harbor, (etc.)."

Besides the puzzle sales, general proceeds from the fair will help support CCE of Niagara County programming to benefit farmers, seniors and children.

"So, it gives us help to be able to give more support to the community and do more for Niagara County," Ducharme said.

Daily fair passes are $5 per person Wednesday to Saturday and $3 per person or $10 per carload Sunday. Weekly passes can be preordered for $16 or purchased at the gate for $18. To pre-order, visit CCE of Niagara County headquarters at 4487 Lake Ave., Lockport.

For more information and a complete schedule listing for each day of the event, visitcceniagaracounty.org/schedule.