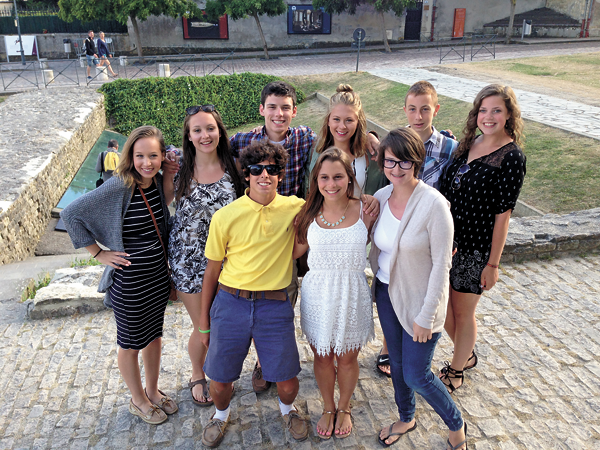 A church youth group has returned from a pilgrimage that served to help them grow in their faith and connect to an Island hero who is honored 5,000 miles from home.

The Journey to Adulthood, or J2A, group at St. Martin-in-the-Fields Episcopal Church of Grand Island is back from a trip to France that included a visit to the memorial to Island native Charles DeGlopper, who posthumously received the Congressional Medal of Honor for his actions in the D-Day invasion.

King said St. Martin's has travelled in earlier pilgrimages with groups from other churches, in 2010 to the Holy Land, in 2012 to Ireland, and in 2014 to England.

Before the trip even began, the group was presented with the sad news of the terrorist attack in Nice, where scores were killed and injured on Bastille Day. The attack took place Thursday, the day before the group's departure for Paris. King said he sent a message to all the parents of the travelers, pointing out Nice was 450 miles away from where the group would be staying.

"If an attack took place in New York City, would you decide that you wouldn't go to Canalside tomorrow night?" King asked.

Everyone scheduled to take part decided to go. "There was some anxiety in some families, but when we got there we discovered how safe it was. There was no anxiety once we landed in France," King said.

The national response to the tragedy was evident throughout the trip. As the trip got underway, the group was delayed half an hour at the airport when an unclaimed piece of luggage shut down baggage control. Sunday morning in France, sermons and prayers where the group attended Mass were about Nice, and at a rest stop Monday, when the group was driving out of Paris, the restaurant where they stopped shut down for a national moment of silence at noon. King saw the 11th century Notre Dame Cathedral in Bayeux, a small city of 13,000, lit in the national colors.

"At night, because the Nice attacks had been the previous Thursday, they asked all the public buildings to be bathed in red, white and blue," King said.

"So we had an opportunity to be in a country as it mourned the loss," King said of the week.

In Paris, they visited the Cathredal of Notre Dame, walked through the Louvre, saw the Arc de Triumphe, took a boat trip on the River Seine, and rode to the top of the Eiffel Tower. Sunday morning, they attended service at the Episcopal Church in Paris, a diocese for ex-patriots, and were able to worship from the same liturgy and style as back home at their Baseline Road church. They shopped in the city's Latin Quarter as well.

They traveled to stay in Bayeux, where they stayed Monday through Friday at a monastery. There, Sister Marie-Pierre told them about the history of the site, and they saw the 11th century Bayeux Tapestry, a 230-foot tapestry, "about a millennium old," King said, depicting the story of Edward the Confessor. 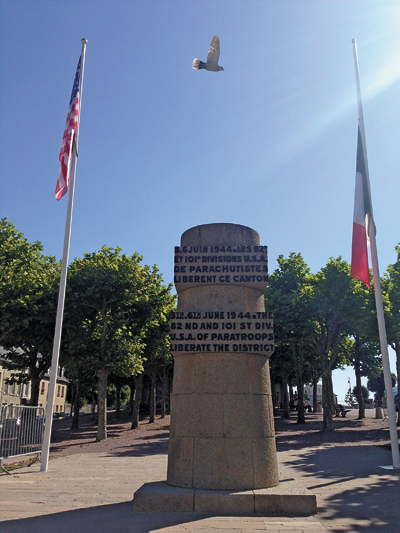 A dove flies over a monument for the 82nd Airborne in the town square in Sainte-Mere-Eglise, not far from the beaches of Normandy. The French flag is at half-staff in honor of the victims of the terrorist attack in Nice that happened July 14, just a day before a group from Grand Island and Orchard Park visited France on a youth pilgrimage.

King said the group spent all day Wednesday at Mont Saint Michel, a medieval monastery in Normandy, where the tide comes in and turns the location into an island.

"It's a stunning place," King said, noting 1.5 million pilgrims visit there each year. The group worshipped in an abbey at the top of the monastery, though the French Catholic service was difficult to follow.

"They did well with the French culture" overall, King said. Three students who had studied some textbook French lessons in school found their high school French a little too academic in nature to prepare them for conversational French, he said.

"They had a good time. I've gotten great feedback from the parents about the trip and how successful it was," King said. "I think the kids did well."

One part of the trip included a visit to the World War II Battle of Normandy, site of the largest amphibious invasion in history. The group added a visit to a memorial there to Congressional Medal of Honor recipient Charles DeGlopper, the Island native who died in the invasion.

The memorial is located in Sainte-Mere-Eglise, where King said the locals lay claim to being the first French liberated by the allies.

King said the most moving part of the Normandy visit was seeing the American Cemetery and Pointe du Hoc. "It was a pretty awesome place," King said of the area, where visitors can still see the craters in the land from bombing during the invasion.

At the cemetery, the group saw a handwritten note left at the statue honoring Maj. Richard Winters, who received the Distinguished Service Cross, the second highest honor for valour. It said: "In remembrance of Ed Joint (d. 2012), Ed Bernot (d. 2016) and Joe Lesniewski (d. 2012) 101st Airborne, 2nd Battalion, 506th PIR ... Who traveled far from their homes in Erie, Pa., USA to serve under Major Winters and who returned to Erie having learned the cost of freedom and the wisdom of a great leader."

King said during their trip to the cemetery, they paid their respects at the graves of Preston and Robert Niland. Their guide told the story of how the movie "Saving Private Ryan" is based in part on their story, and they were surprised to learn the local connection.

King said: "Our guide started telling us the story. She said, '(The Nilands) are from Tonawanda. Do you know where that is?' "

King has said one of the elements of the pilgrimage is to visit places where Christians have prayed hard. A battlefield is such a place, he said, noting the old saying that there are no atheists in foxholes. Seeing the cliffs along the English Channel brought home the difficulty in the attack on D-Day. At Pointe Du Huc, 225 Army Rangers scaled a 100-foot rock cliff to assault the heavily fortified German bunkers. Seeing the cliffs in person, rather than reading about it in a book, makes the battle all the more emotional.

"Probably the cemetery and the cliff were the most powerful places," of the trip, King said.

King said on each J2A trip, the adult leaders can see the church youth growing up before their eyes. Traveling across the world serves to not only develop an understanding of their faith, but puts the youth in a position where they are outside their comfort zones.

King said overseas, there is a sense the youth are beyond the reach and rescue of their parents, where the teenagers need to think for themselves and take on every situation that comes their way, like an adult.

"You learn how to handle yourself in a different way. There is a growing up, there is a coming of age," King said.