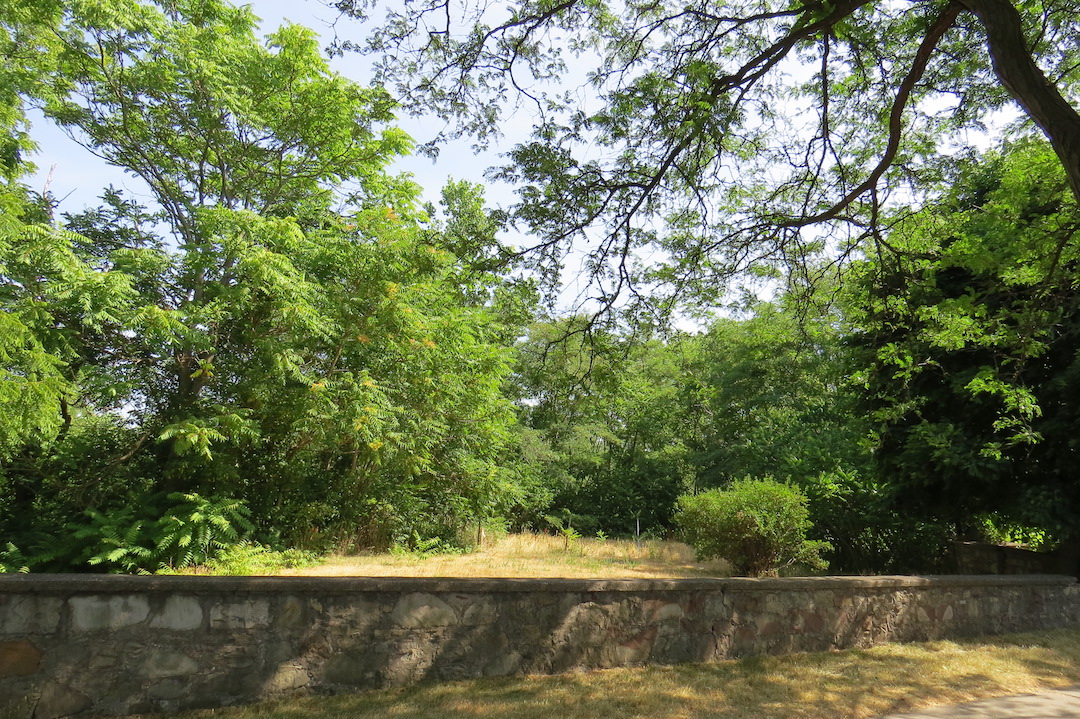 Pictured is a portion of the Ellicott Development property's southwest side.

About 20 people attended a resident-organized meeting in the Village of Lewiston Sunday afternoon, while another 15 staged a business leaders rally Monday morning to state their anxieties over the "Paladino plaza." Many expressed frustration over the municipality's handling of Ellicott Development's proposal to build a 4.1-acre mixed-use plaza on Center, North Eighth and Onondaga streets. Some even suggested hiring an attorney to file an Article 78 formal legal challenge against the village.

Attendees also expressed concern over Ellicott Development's alleged intent to file for brownfield status, which some said would initially prevent the Village of Lewiston from receiving property taxes on the estimated $14 million project.

Some restaurateurs, meanwhile, said they would look to sell their businesses - and property - if the plaza includes chain restaurants, as is expected.

Emery Simon said variances granted to the plaza in May by the Zoning Board of Appeals were "arbitrary and capricious." Those code adjustments waived the required number and length of parking spaces, amount of green space and number of principal buildings.

"Not one resident spoke for the project," Simon said. "Yet they voted against the (ones) that did (oppose it)."

The variances were rescinded on a technicality, but all five (along with two new ones) might be approved at a 6:30 p.m. meeting Thursday night. Working under that assumption, Simon said, "There's no reason that I can think of for the village to give somebody seven variances without cause. The variances should be a hardship."

Simon is a village resident, and owns the Lewiston Stone House, which is across the street from Ellicott Development's property. Simon also owns Center Street land next to the Sunoco minimart, where he intends to place a chain restaurant.

He suggested the Planning Board and ZBA are skirting municipal law. Hauth quoted ZBA Chairman H. John Ritter as saying the codebook is "archaic."

Hauth said, "It is important to us all to resolve the concerns, and to get the recommending boards back on a track that can be supported by the village stakeholders before litigation becomes the only option."

"They're coming up with suggestions and apparently it seems like the developers are going along with it. ... There's something not right where you've got board members telling multimillion-dollar engineers how to do a project," Donaldson said Sunday. 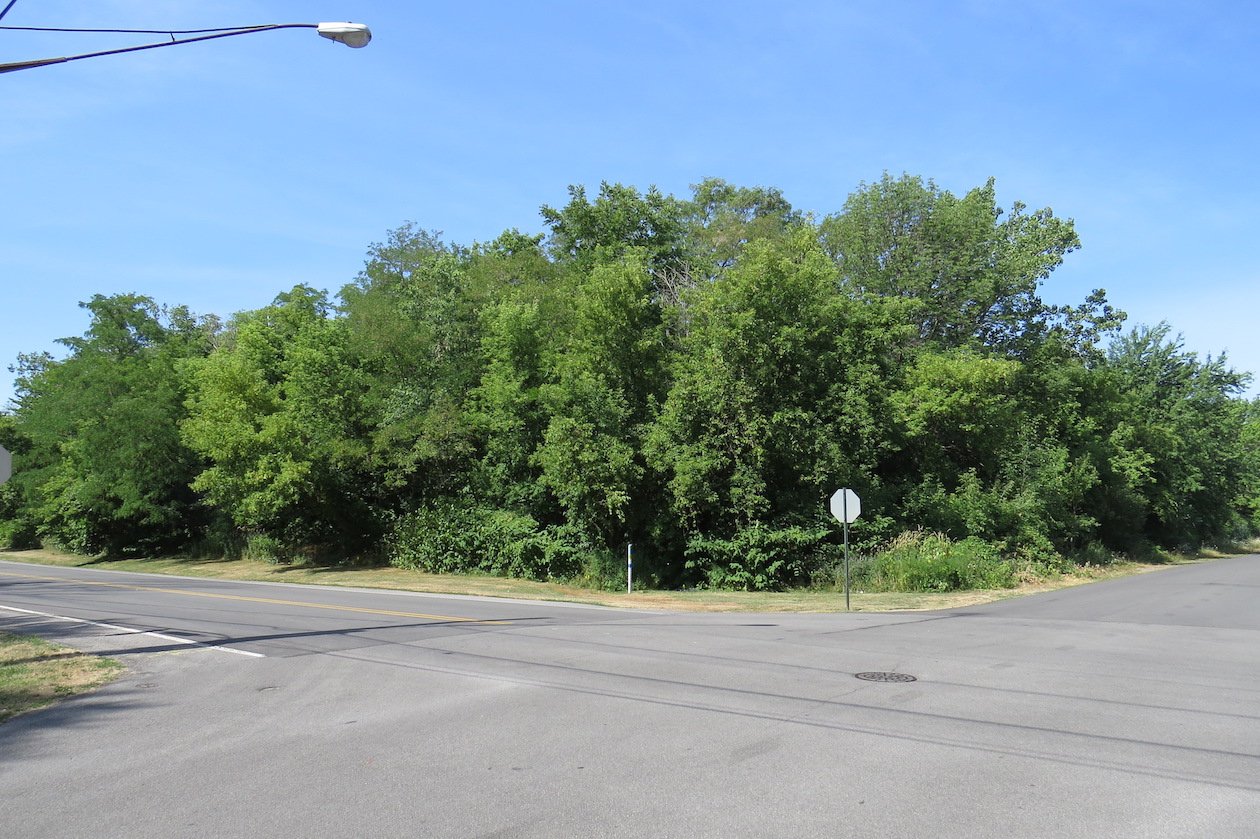 Center Street resident, architect and former Planning Board Chairman David Giusiana said that, if the plaza variances are granted, Lewiston would become a wild west of developments.

"Any client that comes to me with any project in the village, I'm going to say, 'This is great. Whatever you want you do, begin to do.' ... We're going to go in, and (the ZBA is) going to say 'No,' and then we're going to sue based on the fact that you granted him all those variances," Giusiana said.

Resident Jamie Symmonds, a former village business owner and mayoral candidate, said, "If you need that many variances for anything, then it shouldn't even exist. A variance, to me, is a hardship."

"It can't be self-created," Giusiana said.

Simon said Ellicott Development has enough land to accommodate what the code requires - without variances. He suggested the company build a smaller project.

"You're looking for a fair compromise. You're not trying to hurt the guy (Ellicott Development CEO William Paladino)."

Giusiana cautioned, "A variance is a permanent change from the regulations for that property. (If) these variances are granted to Bill Paladino Thursday for all these different things, (and if) he sells the property on Friday to Wal-Mart, Wal-Mart gets to build its building with (75) cars less than they were required."

The ZBA initially granted five variances with an explanation that denial of such requests "would deprive the applicant of the reasonable use" of his property. Ellicott counsel Sean Hopkins, of Buffalo-based Hopkins, Sorgi & Romanowski, said the benefit of the variances outweighed any potential detriment to the community.

Another resident complaint was the alleged lack of opportunity for public comment at Planning Board and ZBA meetings. An additional reason to hire an attorney, it was said Sunday, would be to ensure resident concerns are considered.

Both the Planning Board and the ZBA have afforded the public time to comment at meetings. Still, some residents said they haven't been provided with enough time, or were told to be quiet.

Speaking on behalf of the New York State Department of State, Kristin O'Neill wrote NFP Monday saying, "The Open Meetings Law affords any member of the public with the right to attend, listen and observe the performance of public officials. The law is silent, however, with respect to the right of the public to speak or otherwise participate during meetings. Because that is so, it has been advised that a public body may choose to permit the public to speak at its meetings, but that it is not required to do so. Most public bodies do authorize limited participation by the public, and in those situations, it is suggested that they do so by adopting reasonable rules that treat members of the public equally."

Town of Lewiston resident Sandra Lahrache said she was told only village residents could speak at public meetings.

"There's so many people outside the village that are affected by this, as well, that don't want to see this happen, that don't know that they can come to these meetings and speak up," she said.

O'Neill pointed out correspondence from the state's Committee on Open Government. In a 2011 letter, COG Assistant Director Camille S. Jobin-Davis wrote, "People other than residents, particularly those who own property or operate businesses in a community, may have a substantial interest in attending and expressing their views at hearings held by town boards and other public bodies. Prohibiting those people from speaking ... would, in our view, be unjustifiable. Further, it may be that a non-resident serves, in essence, as a resident's representative, and that precluding the non-resident from speaking would be equivalent to prohibiting a resident from speaking. In short, it is unlikely that a public body could validly prohibit a non-resident from speaking at a public forum based upon residency." 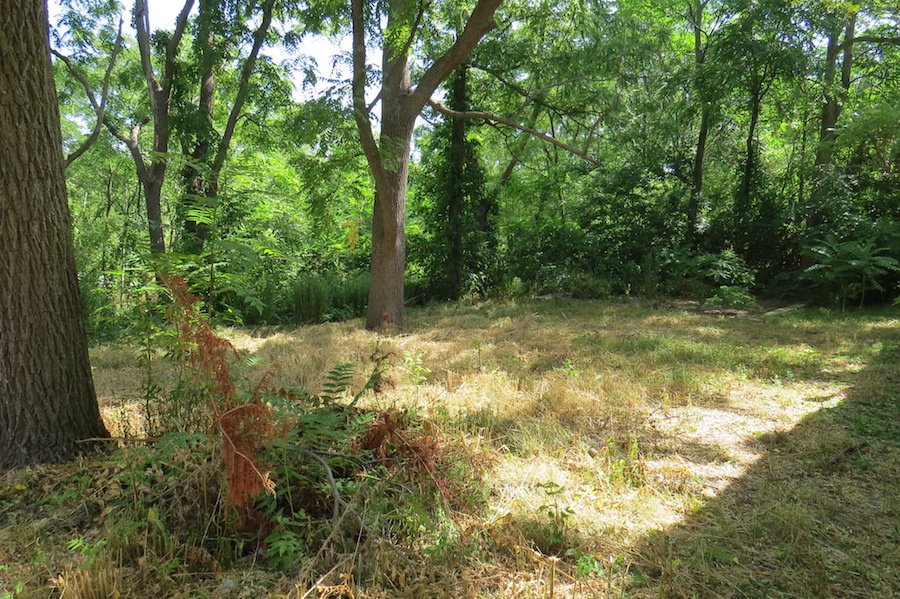 Pictured is a portion of the Ellicott Development property.

Simon explained Sunday, "Unfortunately, I've said for the last 20 years the ground across the street is contaminated with fuel oil."

He owns and operates his own construction company and said he is familiar with the grounds and how they were treated in the past two decades.

Mayor Terry Collesano, at Monday night's Village Board meeting, implied items were dumped. He said, "I remember 70 years ago, I lived right next to this, and I saw things. ..." Village Engineer Michael Marino said phase one of the State Environmental Quality Review revealed there is "a small amount of petroleum" in the property's southeast corner.

Simon said, "Mr. Paladino has now gone to the Department of Environmental Conservation, because he's applying for it to be a ... brownfields project. Now, what that means is he's going to clean up the site, but he's going to come off the tax rolls. So what money we were getting in revenue - tax revenue to the village - is going to disappear."

Village officials said they had no knowledge of any brownfield application.

The website for the New York State DEC states, "A brownfield site is any real property where a contaminant is present at levels exceeding the soil cleanup objectives or other health-based or environmental standards, criteria or guidance adopted by DEC that are applicable based on the reasonably anticipated use of the property, in accordance with applicable regulations."

It adds, "The goal of the Brownfield Cleanup Program is to encourage private-sector cleanups of brownfields and to promote their redevelopment as a means to revitalize economically blighted communities. The BCP is an alternative to greenfield development and is intended to remove some of the barriers to, and provide tax incentives for, the redevelopment of urban brownfields."

One of the criteria for a brownfield site is "oil spill prevention, control, and compensation."

The Ellicott Development site once housed a junkyard and a service station.

Last August, Planning Board Vice Chairwoman Anne Welch quoted Paladino as saying the soil was "bad." At a Village Board meeting in February, municipal counsel Joseph Leone said, "There is the environmental issue that has yet to be determined." At that same meeting, Deputy Mayor Bruce Sutherland said a plan should be implemented to remediate the soil.

In an email Tuesday morning, Paladino wrote there is contamination on the site, "which was always public record and we always intended to clean up. You are also correct that we are looking at entering this site into the brownsfield Program."

He noted, however, "You are incorrect that we will not be paying village taxes. Brownsfield tax credits are income tax credits we use personally not credits against property taxes."

Paladino added, "And we are not applying for any IDA here for property tax breaks."

"The smallest restaurant (in the plaza) would be bigger than The Brickyard," he said. Simon noted he would sell his wine bar if the plaza has chain restaurants.

"The last two years, there's been no profits at Brickyard to give back (to employees)," Bryan said, citing added concern over the pending minimum wage increases.

"I've gone to Emery, (to) all the restaurant owners in town who own their properties, and asked if they'd be interested in selling all their properties at one big sale. I potentially have someone who would buy half of Lewiston in one sale. Because in three years, I don't think, if they put two chains in there, we'll be able to survive. ... You'll see restaurants go out of business."

"If you go down Military Road in the Town of Niagara, how many little mom-and-pop shops are left? Not too many," Simon said Monday morning.

Nearly 30 people attended Monday's board meeting, with almost a dozen residents (including a handful from the other meetings) speaking out against the plaza proposal.

In response, Collesano said, "Your concerns are very important to us. We are listening. We will take these concerns of yours into consideration."

"It's always good to know how our residents feel," he added.

Marino said that, in phase one of the plaza SEQR, no significant concerns were raised by the DEC, the State Office of Parks, Recreation and Historic Preservation, the Niagara County Health Department or the Town of Lewiston. Buffalo-based architecture, engineering and interior design firm Carmina Wood Morris prepared this portion of the SEQR on behalf of Ellicott Development.

The Village Board is studying the SEQR results en route to embarking upon phase two.