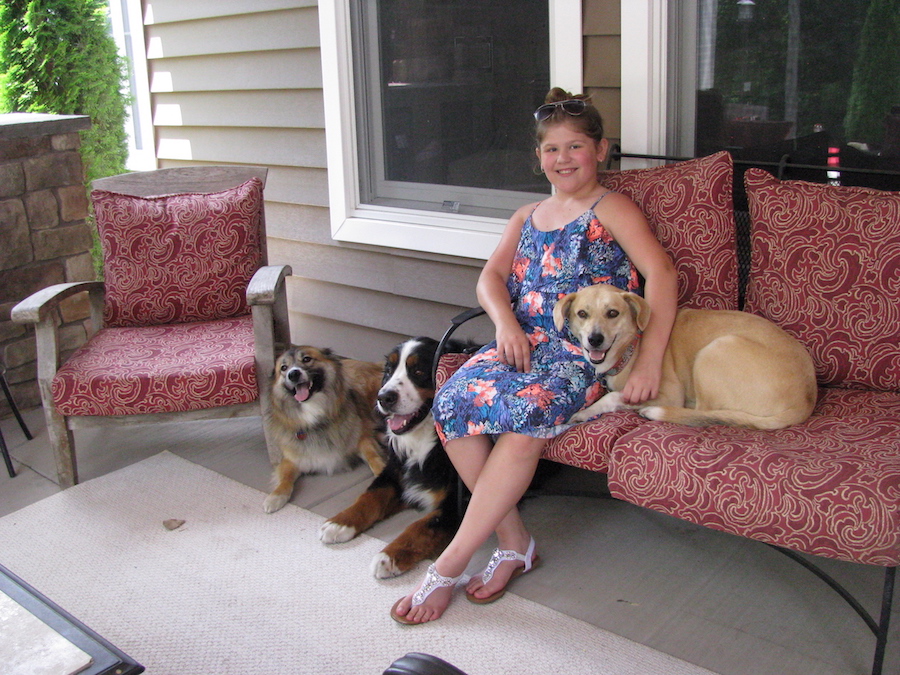 Samantha Tocke, 11, snuggles with her family's dogs at their Lewiston home. From left are Bear, Wilson and Charmer. Bear and Charmer were rescue dogs adopted from Heart of Niagara. (Photo by Susan Mikula Campbell)

Heart of Niagara, the rescue group that has found new homes for more than 400 animals in the past three years, will celebrate finding its own new home on Sunday, July 24.

The combination fundraiser, open house, picnic and adoption event will be held from noon to 4 p.m. at HON's new digs at 3652 Ewings Road in Newfane.

From 1-3 p.m., One Eyed Jacks barbecue restaurant will cater lunch (vegetarian option available on request) and the tribute band BeatleMagic will provide music.

HON officials are asking reservations be made at least a day in advance of the event, so they have an idea how many meals to order.

The new facility has long been a dream for HON, according to Kathy Nowakowski, managing director and board member. The not-for-profit group, based in Niagara County, wanted to create, not a shelter atmosphere, but a place where abandoned, unwanted and homeless dogs could be readied for new owners in a real home environment, she said. The Newfane facility, purchased in November, also provides a meeting place for board members and volunteers.

ASPCA statistics show 11,000 animals are put down every day in overcrowded shelters, said Marjorie Kwiatkowski, treasurer of HON's board of directors.

"We're trying to do the right thing," she said, noting that, not only are HON's rescue dogs given training in basic commands and getting along with other animals, but they are spayed or neutered.

HON currently has 19 dogs available, with more on the way from a shelter in Alabama. Most of the time, the dogs don't come with papers, so they are considered mixed-breed, but HON offers dogs of all ages, shapes, sizes and personalities. They just need a loving home.

Among current dogs that are definitely pure bred are a black German shepherd and a brother-sister pair of 7-year old Shih-Tzus. The rest of the crew includes bulldog, doxie and Lab mixes and more.

"We are taking applications for everybody," Nowakowski said. "We have a harrier hound from Ohio that carries himself like a king when he walks around the yard. We also have a little beagle that's currently being fostered that's only 19 pounds and absolutely adorable."

Many people come to HON looking for a particular breed. Kwiatkowski warned, "They end up with someone else who actually picked them!"

Because HON operates entirely on donations and is 100 percent volunteer, it always needs helping hands, not just to work with the dogs, but also people with skills (electricians, roofers, etc.) to work on improving the new property, Nowakowski said. Youngsters can volunteer with their families or as part of a community service project.

Kwiatkowski has a cat named Bentley who is "king of the castle" at home, so she comes to HON regularly to play with the dogs. Sometimes it is bittersweet seeing her favorites adopted into new homes, but she said, "I want them to have a nice life; they deserve that."

"A lot of the dogs come to us very fearful and just need to be held," Nowakowski said. Some were abused by former owners or destined for death in a shelter.

That could describe Charmer, who now is a beloved pet at the Lewiston home of Janine Palmiere-Tocke and her fiancé, Eric Matthews.

They already had Wilson, a Bernese mountain dog, when Palmiere-Tocke stopped at the HON table to talk with volunteers and see the available dogs at the Lewiston GardenFest two years ago.

After adopting the very shy Charmer, Palmiere-Tocke was asked to babysit Bear while the person fostering the 14-week-old puppy was away for the weekend. Not only did Bear end up added to Palmiere-Tocke's blended family, but one of the puppy's littermates was adopted by Palmiere-Tocke's parents.

Another dog's life saved. Another loving home. Another win for HON. 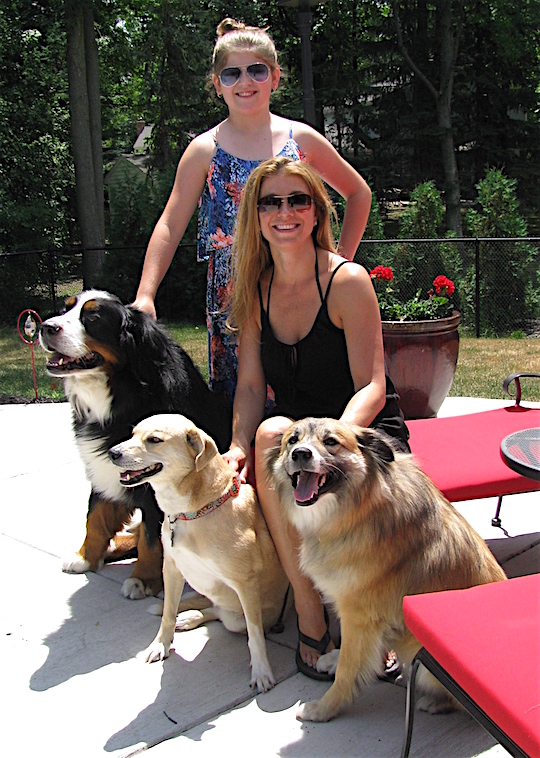 Janine Palmiere-Tocke (seated) and her daughter, Samantha, show off their blended family's pets at their Lewiston home. The dogs, from left, are Wilson, Charmer and Bear. Bear and Charmer were adopted from Heart of Niagara. (Photo by Susan Mikula Campbell) 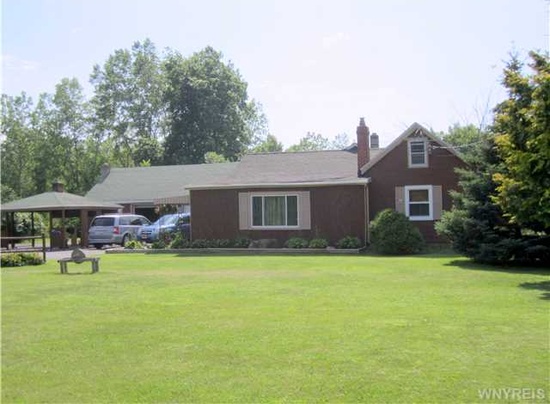 Shown is the new Heart of Niagara house at 3652 Ewings Road in Newfane. (Photo courtesy of HON)