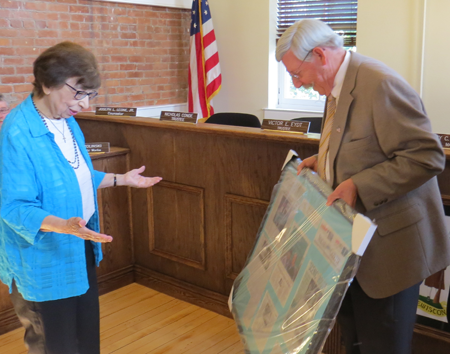 Mamie Simonson receives accolades from Mayor Collesano and the board.

Village of Lewiston sets appointments for 2016-17

Trustees in the Village of Lewiston opted for stability at Tuesday's reorganizational meeting.

•Norm Machelor as chairman of the Planning Board (one-year term)

•H. John Ritter as chairman of the Zoning Board of Appeals (five-year term)

•The Sentinel as the official village newspaper

Trustees once again will meet at 6 p.m. in the Red Brick Municipal Building, 145 N. Fourth St., for official Village Board meetings on the first Monday of each month From October through May 2017 (work session); the first Tuesday of September (work session); the third Monday from September through December and March through August (regular board meeting); and on the third Tuesday in January and February (regular board meeting).

The next organizational meeting is scheduled for 6 p.m. Wednesday, July 5, 2017.

Following the approval of agenda items, recently re-elected trustees Daniel Gibson and Nicholas Conde were sworn into office by the Hon. Justice Hugh Gee. Each will serve a four-year term.

On June 9, Gov. Andrew Cuomo announced the Robert Moses Parkway would be retitled the Niagara Scenic Parkway. The name change was prompted by 55-year Village of Lewiston resident Mamie Simonson, who lobbied for a label that would be more informative for motorists.

In recognition of Simonson's efforts, trustees presented her with a collage of newspaper articles detailing the governor's action, as well as picture of Simonson with Cuomo, and a decree proclaiming July 5, 2016, as "Mamie Simonson Day" in the Village of Lewiston.

"You know, Mamie Simonson is such a celebrity for our village," Collesano said. "She has coffee and meets with the governor of New York state."

"We need to honor you in a special way," he added. "So, here's a little something."

Seeing the collage, Simonson said, "Oh my goodness; I haven't (even) done that." She thanked the mayor's office for putting the article clippings together and said, "That's beautiful - how nice. ... That's wonderful. Thank you so much."

Recalling her meeting with Cuomo, Simonson said, "I was telling him he's so handsome. He said, 'Are you flirting with me?' "

Collesano read the village proclamation. He said, in part, "Mamie Simonson has shown dedication, service and exceptional involvement in the Lewiston community, providing endless hours of unselfish hard work to better our community. ... Mamie's contributions to Lewiston and the area have benefitted our entire community."

Simonson has served on the village's Beautification Commission and as a member of the Friends of the Lewiston Library. She has helped organize the annual food drive outside of Artpark before "Tuesday in the Park" concerts, which has yielded more than $100,000 in total for agencies including Heart, Love and Soul Food Pantry and Community Missions.

Mamie and her late husband, Marvin, ran a photography studio at Sixth and Cayuga streets until retiring in 2006.

The Village of Lewiston provided the first endorsement of the parkway petition.