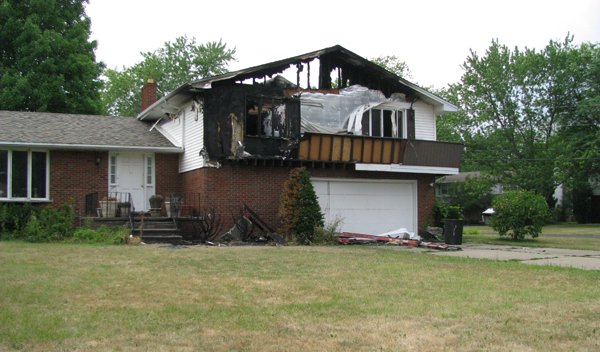 Only charred sticks remain of the bushes that caught fire on June 30 in Youngstown's Collingwood Estates off River Road. The fire spread from bushes in front of the house at 397 Howard Drive and into the house itself. (Photo by Susan Mikula Campbell)

A GoFundMe page has been set up to aid the victims of a major house fire that occurred the afternoon of Thursday, June 30, at 397 Howard Drive (Collingwood Estates) in the Town of Porter.

The GoFundMe account was set up by the family's oldest daughter, Blair, who reported her mother and two younger siblings moved into her two-bedroom apartment after the fire. She indicated her brother and sister were home at the time of the fire, while she and her mother rushed home from work.

"Everyone escaped the fire, including pets. However, everything we owned is now a pile of soaking-wet ash," she wrote, noting that money raised would go toward clothing and food until insurance companies evaluate the damage and provide compensation.

The Niagara County Fire Wire's initial report indicated the fire apparently started in bushes in front of the two-story portion of the split-level house, then spread to second-floor bedrooms and to the attic and roof. No injuries were reported. The Niagara County Fire Origin and Cause team is investigating and has yet to issue a final report on the cause of the fire.

The call initially came into 911 dispatch as a grass/brush fire and the Youngstown Volunteer Fire Co. was toned out. The first engine was on the road within about 4 minutes and the second engine followed right behind, but the fire already had spread to the house, according to Fire Chief Scott Muller.

Lack of rain has left grass and brush extremely dry in the Youngstown area.

"That fire just traveled very fast," Muller said. "We believe the windows were open (in the second-story bedroom above the burning bushes), which allowed it to jump right up, a chimney effect, so to speak."

The Ransomville and Lewiston No. 1 volunteer fire companies were called to assist and the Firefighter Assist and Search Team (FAST) from the Niagara Falls Air Reserve Station was on standby at the scene, Muller said. Meanwhile, the Wilson Volunteer Fire Company covered the Youngstown hall in case other calls came in.

Some of the concerned neighbors gathering outside the fire lines brought bottles of water and sports drinks to the scene for firefighters and family members. Some returning home who live at the rear of the development had to park their cars on Howard Drive and walk home, because access to Lynbrook Drive was temporarily blocked by fire equipment responding to the fire at the Howard Drive home located across the street from the Lynbrook entrance.

Meanwhile, the 15-year-old Bersani son is hoping for an early return to Collingwood Estates. This week, he distributed flyers in the neighborhood offering lawn mowing, yard work and vacation services such as collecting mail, watering gardens and house plants, and small pet care in order to earn extra money.

More photos of the fire scene can be found on the GoFundMe page.