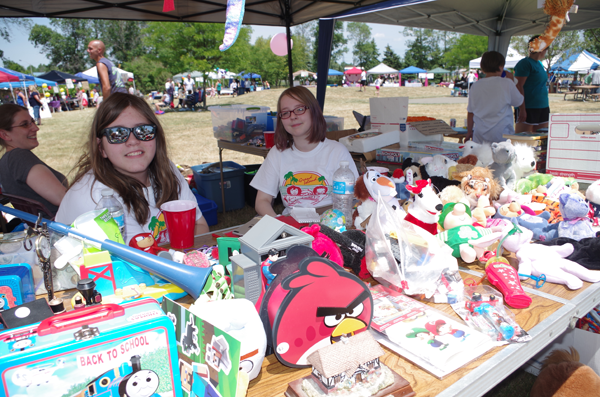 Sales were as hot as the weather Saturday for some of the young businesspeople at the 20th annual KidBiz in the Town Commons.

The annual event sponsored by the Grand Island Chamber of Commerce had 75 students middle-school age and younger selling anything they could think of as part of 45 licensed businesses.

"It's always, always a pleasure to see young people who actually engage in doing something that, one, is very, very rewarding and very productive, and very educational, with enthusiasm, spirit, and zest," he said. "I mean, could you ask for better? And obviously, thank you, parents, thank you, parents, for supporting your young business people."

Sharpe and Kim McMahon, administrative director of the Grand Island Chamber of Commerce, said some kids were completely sold out of some of the items they brought. McMahon noted the vendor of mousetrap refrigerator magnets sold all his magnets, a business she called the maple syrup kids was a sweet success, and sellers of cutting boards shaped like Buffaloes made big bucks. McMahon said boys selling cutting boards sold 48 units at last count.

Sharpe said some products were big hits, calling them "products that you would think that are too expensive to be sold at KidBiz."

Nate Meyers, Fortune Macri and Elijah Linenfelser of The Bosses made the Buffalo cutting boards (made of corian) that they fabricated themselves for sale at KidBiz. The 10-year-olds were selling the cutting boards for $20, or two for $30. Macri said they went to the factory and sanded the Buffaloes themselves.

"And then we had to put the little feat on the back," Meyers said.

"We had to try for perfection. It had to be really clean," Macri said.

Also in attendance were off-Island KidBizzers. McMahon said kids from Clarence, West Seneca, and East Aurora - towns that don't offer a hometown KidBiz event - were selling side by side with the Island representatives.

Sharpe said the chamber in Tonawanda wants him to make a presentation on the KidBiz program in hopes of running an event in the Ken-Ton area.

"It's a great program," he said. "I think it's a bottom-up program, meaning that the students are the ones who actually decide they're going to do it and they convince their parents to support them in this endeavor. Some programs are built the other way around, where parents are trying to encourage their kids to be in KidBiz. But this program is really designed for the student, realizing that they have control of their destiny, they have control of the day here. This is all about them."

Annika Michel and Victoria Leach, both of Clarence, formed the business called Chasing Our Dreams. They said they were raising the money for their dream, to attend golf boot camp in Florida. Leach's father, Jeff, is a native Islander and her grandparents still live on the Island.

Evonne Michel said through KidBiz her daughter is learning entrepreneurship, responsibility, self-reliance and goal-setting. They also learn to not let anyone stop you from pursuing your goals.

"When you have an idea and you want to go for it, just go for it," Evonne Michel said. "They're girls, and we want to empower them to do their best every day."

"They learn how to support each other," added Amy Leach, Victoria's mother.

They sold their handmade pillows, pop tab bracelets, hair ties, headbands, golf shot counters and inspirational signs. The golf counters are little beaded strings that help golfers keep track of their shots. Normally the duo take part in craft shows with adults, but in KidBiz, Victoria said, "It's nice not being up against adults. It's also fun getting to know the other kids."

Their grandparents bought them sewing machines for Christmas and they've learned how to sew on their own. That was about the extent of parental involvement for many KidBiz participants. Parents stayed in the background at the tents with their children front and center in charge of merchandise, marketing, and the point of sale.

"The parents understand their role in the program as well as the student," Sharpe said.

The rules for KidBiz are: have fun, make money, work with other KidBizzers, and work with the customers, Sharpe said. KidBiz in the Town Commons, in the heart of the town's business district, is designed to mimic real-world businesses, with each enterprise paying for a business license.

"It comes down to making decisions about what you're going to do. We do not train them in a training program to anticipate this and this and this. There's no manual that says, 'These are the things you do.' And the manual would be 30 pages deep and they'll never read it," Sharpe said. "Here, they did a 30-page manual from the seat of their pants. They endured and figured out what they need to do at the time they need to do it."

"They watch their environment, they watch what the environment does, and that's no different than what happens out there," Sharpe said, pointing to Grand Island Boulevard.

Sharpe thanked the Grand Island chamber, for its ongoing support of the program, and the chamber's Youth Ambassadors Jake Tucker and Sarah Swagler, for their help on the day of the event.