During Tuesday's Town of Niagara meeting, the board scheduled a public hearing for 7 p.m. Tuesday,  July 19, to discuss rezoning of the former Walmart building from general business to light industrial.

A prospective buyer, Gordon J. Reger, is interested in purchasing the former Walmart building at 5555 Porter Road. Reger already owns the former Sam's Club building next door, which sits mostly in the City of Niagara Falls and partially in the Town of Niagara.

He plans to build a connecting structure between the former Walmart and Sam's Club buildings and convert them into a warehouse.

"It's going to be one complex," Town of Niagara Supervisor Lee S. Wallace said. He added, the prospective buyer also plans to "fix up" the front of the buildings.

In order to pursue the transition, Reger requested the town change the Walmart's B-1 zoned property to L-1 in order to allow for the plans. The former Sam's Club site is currently zoned L-1.

Reger's decision on whether or not to purchase the additional property is "contingent upon us making the switch. If we don't do this, they won't buy it," Wallace said, adding the transaction would be positive.

Both buildings are vacant.

"It's pretty well isolated," Wallace said. "It's off the beaten path now. There's no Walmart, there's no Sam's Club. Nobody goes down there. It's a perfect spot for this." 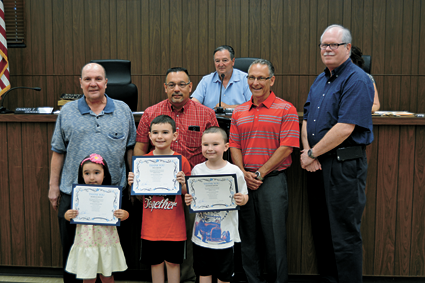 •Some of the town's youngest residents and their families received proclamations from the town for their continued help cleaning up Belden Center.

"The Belden Center people got a jump on us and they did theirs earlier and they always have done it," Wallace said. "And so we have some proclamations for those people who helped out."

Board members congratulated and thanked the proclamation recipients as they posed for photos with them. 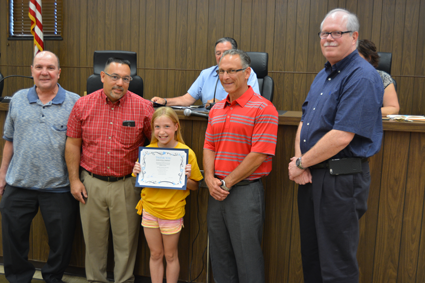 Samantha Tierney, a participant of "Niagara Beautification Cleanup at Belden Center," holds up her proclamation while posing with Town Board members for a photo Tuesday night.

•The board approved a blanket-use permit for the Fashion Outlets Niagara Falls USA to hold multiple outdoor events for the remainder of the year. New events must be submitted in writing to Wallace for approval at least 30 days prior to each event.

Deputy Supervisor Charles F. Teixeira said the permit would allow the mall to "have sidewalk sales and their tent sales that they have outside, so they don't have to keep coming and get a separate permit every time. And, hopefully, it can increase business, because the better that mall does, the better our taxes are for everybody in the county."

•The board permitted the Niagara County Department of Social Services to hold the 19th annual Kidz and Kites event from 11 a.m. to 2 p.m. Saturday, Sept. 17, at Veterans Memorial Community Park. The event features kite-flying, music, entertainment, food and more.

"If you've never been to Kidz and Kites at the town park in September ... bring your kids or your grandkids to it," Teixeira said. "Tell your neighbors. It's a wonderful thing. It's really neat to see and ... it's very nice."

•The town will hold one work session each for the months of July and August. These works sessions are scheduled for 6:30 p.m. Wednesday, July 13, and Wednesday, Aug. 17.