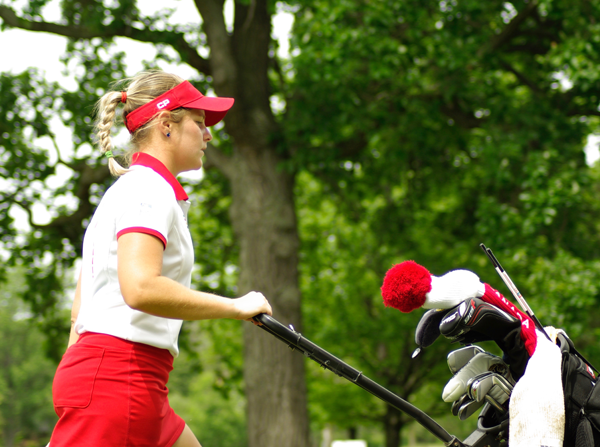 While Josee Doyon was playing a spectacular back nine en route to winning the fourth Women's Porter Cup golf tournament on June 10, a former Western New Yorker, now living in Florida, was receiving text messages from his wife of her performance at the Niagara Falls Country Club.

Ron and Fay Zoeller are avid golfers and they were extremely impressed with Doyon when they recently met her at Kent State University, where she was a four-year starter on the golf team and graduated with a 3.98 grade-point average and two degrees.

Ron Zoeller, who owned North AmeriCare Health Care, which purchased the naming rights of the downtown Buffalo ballpark in the early 2000s, was also co-chair of the "Business Backs The Bills" initiative, which essentially kept the Bills in Buffalo not that many years ago. A 1969 Kent State graduate and a soccer letterman, he was invited in 2005 to join its National Athletic Development Council. The NADC provides fundraising and other support to the school's athletic department.

He has become so involved and is such a booster of Kent State that the school has named the soccer field after him. Each April, the university sponsors a party that includes auctions and raffles to support the athletes. He met Josee as she sold him raffle tickets.

"We ended up speaking for 30 minutes about her golf career in Canada and her past four years at Kent State. When she discussed her goals, she talked about attempting to qualify for the LPGA Tour at the end of this summer," recalls Zoeller, whose love for WNY now has him and Fay exploring a move back here.

"We discussed the expense of moving to that next level, so I gave her my business card for future discussions and, when I returned home the next day, she had emailed me her biography, goals and contact information. I knew then she was serious about becoming a professional golfer," he adds.

Doyon, a 23-years-young native of St. Georges, Quebec, who plays left-handed because she grew up shooting left as a young hockey player, was the 2015 Mid-American Conference Player of the Year in women's golf for Kent State. The college has won 18 consecutive MAC championships and ranked 13th this year out of more than 200 NCAA women's golf teams.

As a member of the Canadian National women's golf team, Doyon will continue to play amateur tournaments this summer with a goal of representing the country at the World Amateurs in Mexico in September.

Her path to the LPGA will begin in its Q-School. Her objective is to advance to the third stage in order to receive full status onto the LPGA. If she does not receive that status, she would join the Symetra Tour and play her way onto the LPGA.

To get there, Doyon needs funds. She comes from a small dairy-farming town where she grew up playing sports and working on the farm. She does not have the financial wherewithal to start this professional journey, which, according to Zoeller, is nearly $40,000 to cover all costs.

Doyon created a GoFundMe page, https://www.gofundme.com/252cu9xj, to help with costs. 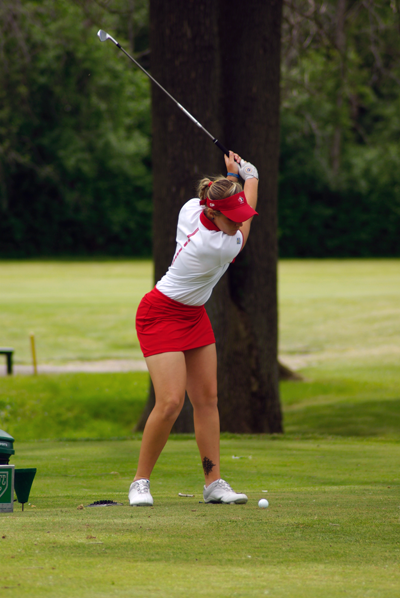 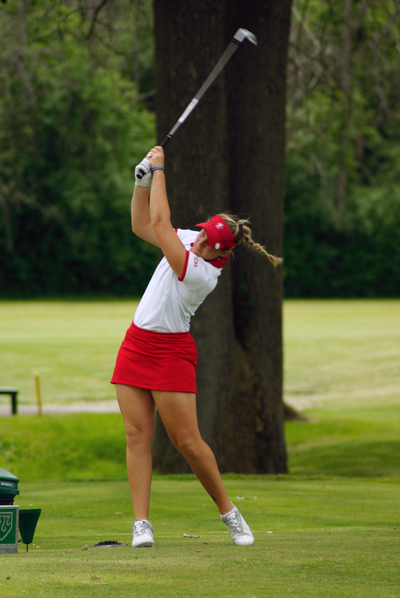 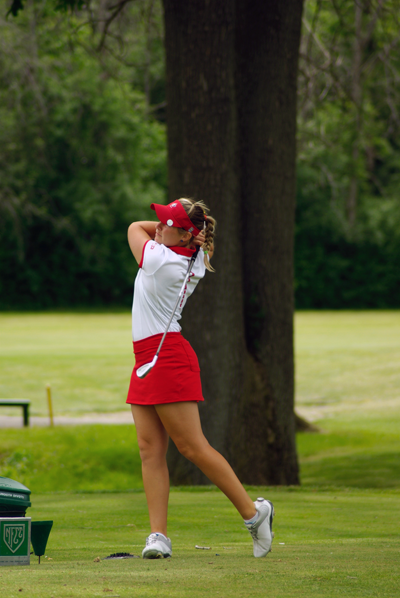 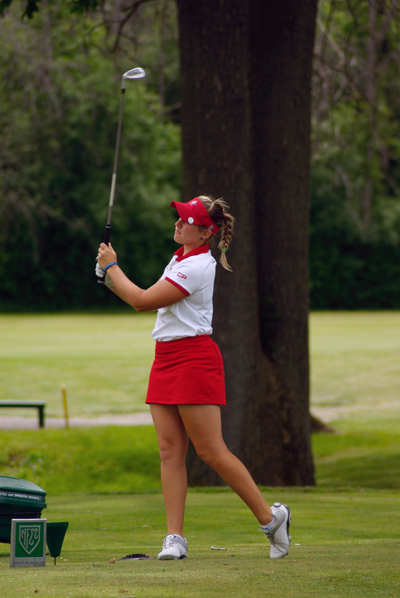 She says she's extremely excited about this next chapter in her golf journey, and she believes being a lefty can become her trademark in the LPGA.

"I really want to own that trademark in the LPGA that I am a left-handed player," Doyon says with a combination of humbleness and confidence as she sits in the dining room at Niagara Falls Country Club awaiting the presentation of her Porter Cup trophy. "I am so grateful for my hockey skills that made me a lefty, because the adjustments I had to make and feeling different than the other golfers has always made me want to push and work even harder."

"Golf is more than a sport to me; it is my lifestyle," she adds. "My daily life and my choices are all oriented towards a single goal today: playing on the LPGA."

For inspiration, she has Brooke Henderson, a former Team Canada teammate, the winner of the Women's Porter Cup in 2014, and now ranked second in the world. Henderson, at just 18, has already earned over $1 million on the tour.

This was Doyon's third Porter Cup performance. She finished third last year and, this year, was two back of the leader after the second round, which saw her card five birdies on the back nine.

On the final sun-drenched day, she birdied the par-4 sixth and par-3 seventh while the second-round leader Princess Superal bogeyed the sixth to give Doyon a lead she never relinquished.

Doyon played flawlessly on the back nine, including birdies on 17 and 18 to complete a 5-under 66 to earn a five-shot victory. 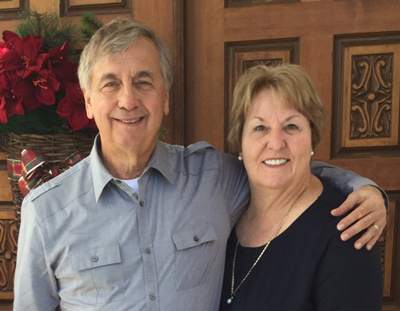 Fay Zoeller followed her throughout the afternoon as she was in town visiting family.

"Josee clearly has the talent, but what is so unusual is her package of enthusiasm, focus and drive," Ron Zoeller says. "She has the attitude and enthusiasm of a youngster and the maturity of a veteran. The best athletes do not realize there actually is a chance of failure."

During her first two visits here, Doyon was a houseguest of Bill and Suzie Jack of Grand Island, who also watched her win the Porter Cup in Lewiston.

"She is mentally tough and a lot of that comes from working on a farm back home," Suzie says. "She is such a nice young lady and we loved having her stay at our home."

"Earning a win like this will help her a lot as she focuses on the LPGA," Bill adds. "For her size, she hits the ball a ton and, as you saw, she has soft hands around the green."

Her Team Canada coach, Tristan Mullally, adds, "She has all the qualities to be a pro and, most important, she has a game plan and she is working it. She is very disciplined."

"It was so exciting to finish this way, as this is my final time at this wonderful tournament, where the people are so nice," Doyon says.

You can be assured as she continues her journey as a professional, Doyon will always have a soft spot in her heart for the wonderful folks at the Women's Porter Cup. 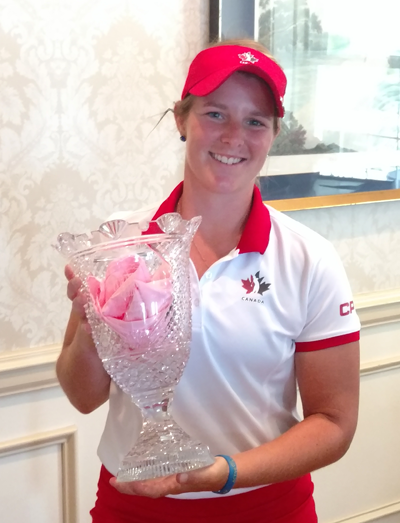