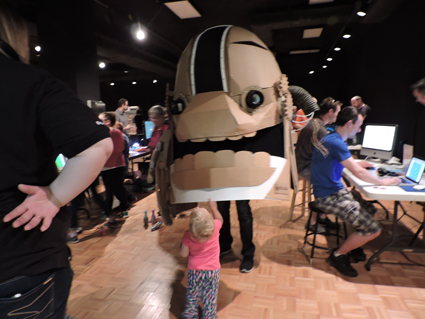 'Maker' movement begins a growing community of inventors to WNY

Whether it's medicine, innovative artists or manufacturers, the left side of the state is home to lots of talented folks who are making what they love - and some are changing lives.

The "maker" movement is going strong locally, and growing even more in the technology sector. Buffalo's renaissance has brought with it artists and entrepreneurs, creating a faction of modern day inventors. There are the people who are "making" Buffalo/Niagara even more unique.

The maker movement is a trend in which individuals or groups of individuals create and market products that are recreated and assembled using unused, discarded or broken electronic, plastic, silicon or virtually any raw material and/or product from a computer-related device.

Most recently, creative types of all ages from around the region gathered at the third annual Buffalo Mini Maker Faire, held at the Buffalo Museum of Science. A variety of mediums and makers included metal, motors, robots, performers, gamers, cuisine and drinks, sound making, 3D printing, woodworking, weaving and fiber arts, clothing and paper art. 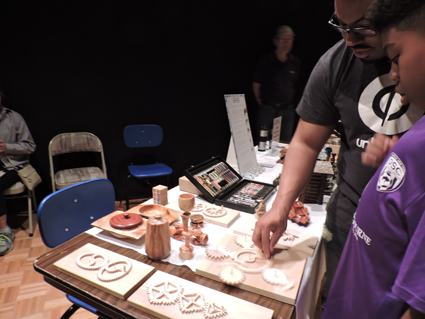 "Being a cutting-edge science center, we are aware of what's going on in the industry. The maker movement was starting to take hold a few years ago - we saw the trend coming," said David Cinquino, director of exhibits, Buffalo Museum of Science.

The maker movement appeals to all ages, and is fitting in an educational setting.

The Education Collaborative of Western New York was credited with holding the second annual high school component of a maker faire earlier this year, made possible through a grant from the John R. Oishei Foundation. This consortium of schools gave students the opportunity to share ideas, furthering their creative process in front of their teachers - and complimenting the STEM curriculum.

"The maker movement is so open it can pretty much encompass anything we cover - engineering, robotics, and even arts," said Eric Yarwood, assistant director of education and technology at the Education Collaborative of Western New York. "The big thing is that it's different because no one is there to judge - it becomes a space to participate."

Some say the maker movement is a reaction to the de-valuing of physical exploration and the growing sense of disconnect with the physical world in modern cities resulting from the growth of technology. Others say it devalues existing industries. Nonetheless, the movement is growing.

The maker movement may still be a mystery to some but, thanks to social media, the makers can promote themselves and each other, creating communities throughout the globe formed from these passions.

At the recent show-and-tell at the Buffalo Museum of Science, Joseph Dunlop, vice president of SWITZER, a local chemical milling company that produces high-precision, photochemically etched parts for electronics, computer optics, telecommunications and medical equipment, said having a presence at Maker Faire Buffalo was a must, "it fits in with a component of our mission: community."

The Lockport Woodworkers were also showcasing wares, most of which were given away. Members (mostly all are retired) from Niagara Falls and surrounding communities make birdhouses, pens, model planes, trains and radio controls.

"Creating these items make people happy, and it shows beginners to skilled woodworkers what can be done," said Ted Szczesny, a self-proclaimed age 60-plus kid. "Members come to us from a variety of careers. Making things require a lot of knowledge - science, technology, engineering and math."

Patrick Whalen, former chief operating officer at the Buffalo Niagara Medical Campus Inc., said he worked with a lot of maker space ideas and he's stayed close to several. He agreed the local renaissance, entrepreneurial spirit and (grassroots) arts initiative has created a culture where makers can strive within a strong community.

"I am currently mentoring a guy (Daniel Hutchison) who makes 3D machines to remove excess material from 3D printed parts and another (Scott Vader of Vader Systems) who makes 3D printers for metal," Whalen said.

Both makers have received funding.

In regard to science, it's apparent the maker movement is more than arts and crafts.

Vader has worked with Ciprian Ionita, Ph.D., research assistant professor in the department of biomedical engineering at Jacobs School of Medicine and Biomedical Sciences at the University at Buffalo.

"With a 3D printer, we can make a complex models of peoples' MRIs and CT scans, and a neurosurgeon can use it, or, in a complicated case, a doctor can create valve replacements - our fingers never stop," Ionita said. "For example, if a patient had an aneurism and the micro-valve replacement is not sized properly it won't work. The doctor went to a classical approach with a (3D printed) coil and it made a huge difference in the procedure, and it helped the doctor change his whole approach.

"There is a whole new set of rules using 3D printing in medicine; it's a serious new tool for surgery and we are getting ready for it. It's a surgical tool and we'll have a standard way of approaching it. Statistics show it will take off."

"At Gates Vascular Institute, they make a 3D model of the vascular system and practice before surgery," Whalen said. "That's something we can all be grateful for."

On May 18, UPS announced it was launching an industrial-strength, on-demand 3D printing service network this summer. The operation will link its global logistics network with 3D printers at more than 60 UPS stores throughout the U.S.

Michelle Blackley Glynn is the owner/chief creative officer at Full Plate Publicity and adjunct instructor at Niagara University. She is also the host of "Pearls, Plates & Planes" on LCTV. Find Michelle on Twitter at shellblackley.