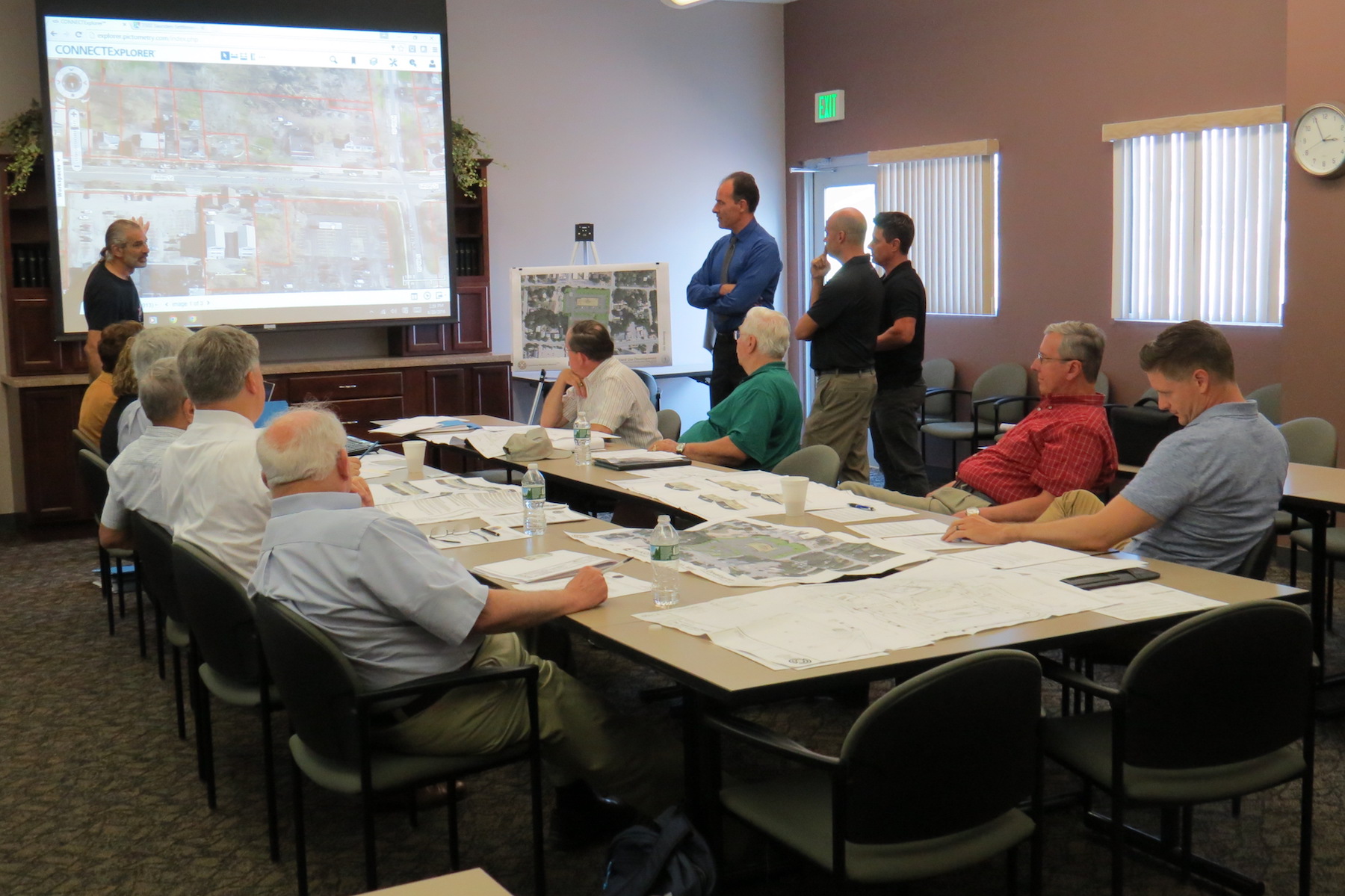 Though members did vote, they designated the project as having no significant countywide or intercommunity impact.

The Niagara County Planning Board passed on voting for or against Ellicott Development's proposal to build a mixed-use plaza on 4.1 acres of Village of Lewiston property. At an afternoon meeting Monday, members said the project does not present any intercommunity or countywide impact and, as such, declined to rule on the development's use variances and site plan.

They sent the plan back to Lewiston for municipal review. The NCPB also will send informal comments to the Planning Board and Village Board of Trustees suggesting the plaza conform to fire safety standards set forth by Lewiston No. 1 Volunteer Fire Co. Board members are encouraging the village to review project elevation, and landscaping and snow removal options.

Ellicott Development CEO William Paladino said the $14 million project is moving ahead without a pharmacy in building No. 3. The two-story structure's first floor will instead offer a mix of retail units.

There also was talk of second floor office spaces throughout the plaza.

He explained there are no tenants.

"We don't have any uses for any of the buildings at this point in time," Paladino said.

Three weeks ago, the Village of Lewiston Planning Board rescinded five previously approved plaza variances following revelation the proposal first had to go before the NCPB.

Ellicott Development's counsel, Sean Hopkins of Hopkins, Sorgi & Romanowski, offered some brief remarks to the Niagara County board as he sought approval for his client.

NCPB members asked about the height of the plaza's three buildings, the number and size of parking spaces, and the project's overall place within the historic village and its Center Street landscape.

In fact, NCPB member Bill Angus asked colleague and Village of Lewiston Planning Board Chairman Norm Machelor, "Does this reflect, to you, Center Street?"

Machelor, who abstained from Monday's vote, said Paladino and his team had made strides in reconfiguring the plaza plan to his board's appeals. He said the Village of Lewiston PB was intent on having buildings No. 1 and No. 2 at grade on Center Street, divided by an "in-only" roadway, with a hidden drive-thru (below grade) attached to building No. 1.

The developer obliged on all requests.

Paladino said, "We've had extensive discussions with the village regarding (meshing). The Planning Board, in general, has been very influential in the design of these buildings and the look of them."

"It is important, as part of the project, we've incorporated considerable input in terms of landscaping, layout; it's been reviewed by (New York's State Historic Preservation Office), etc., etc.," Hopkins said. "So, we think ... we're hopefully in a position that we can finalize the approval process. Bill would like nothing more than to be in a position to commence construction of this project in the very near future."

Lewiston resident Emery Simon, who owns the Lewiston Stone House and adjacent property across the street from the "Paladino plaza," had a heated exchange with Hopkins, Wood and Paladino over what he called an "overbuilt" plan. Simon said he favored development, but, as presented, the plaza couldn't be properly snowplowed, would amplify existing parking problems within the village, and cause drainage problems for neighbors.

"It needs smaller buildings; it needs less of a footprint," he said.

"There is no shortfall here; there is no hardship; he has the land," Simon added. "You're trying to build a monster on a postage stamp."

"Look at ... how much parking we actually have there compared to the size of the buildings there," Paladino added. "Look at everything else in the Village of Lewiston. What else has remotely as much parking as we have, for what we have there?"

Following a vigorous back-and-forth, NCPB member Robert Bilson asked the men to cool off, and that's when Niagara County Department of Economic Development Senior Planner Amy Fisk informed the board of the project's scope. Members agreed the details would best be analyzed at the local level.

The NCPB, per Niagara County Department of Economic Development literature, exists to "bring attention to pertinent intercommunity and countywide planning, zoning, site plan and subdivision considerations," which may include, among other things, "traffic characteristics, including impact on adjacent land uses and capacity of existing infrastructure."

At a special Village of Lewiston Zoning Board of Appeals meeting May 6, Ellicott Development was granted five variances: primary building (three units instead of one); number of parking spaces (187 instead of a required 262); parking space size (9 by 18 feet instead of 9 by 20 feet); green space (25 percent instead of 30 percent); and drive-thru windows (two are not rear-positioned).

Less than two weeks later, the Niagara County Center for Economic Development informed the mayor's office, "New York State General Municipal Law, Article 12B, Section 239 requires specific actions to be referred to the County for review if they involve issuance of a special permit, approval of a site plan or subdivision, granting of a use or area variance," when certain conditions exist. As the plaza project is within 500 feet of a state roadway (Center Street), it falls under the NCPB's purview.

Hopkins said he submitted correspondence to the village asking the ZBA to reapprove the five variances, and asked for a code interpretation as to what type of apartment unit (one bedroom or two) could be created on building No. 3's second floor.

Ellicott Development purchased 756, 784-790 Center St., and adjacent vacant land on Onondaga Street (bordering North Eighth Street) from the law firm HoganWillig PLLC in 2012. Recent tenants included The Country Doctor, Grandpaws Pet Emporium and Smith Brothers Pizza. The former two have relocated while the latter is waiting to see if the plaza will gain final approval from the Village of Lewiston.

The property in question is located on what Angus called "an amazingly steep hill" that slopes down from Center Street to Onondaga Street.

The Village of Lewiston Planning Board approved Ellicott Development's first submission in February. It's unclear when the second submission will be presented, but it will include the State Environmental Quality Review results, and it will likely reflect the changes mentioned at the NCPB meeting.

•The NCPB approved a lot merger and site plan review application from St. Peter R.C. Church. The North Sixth Street entity is merging 620 Center and 625 Onondaga streets in order to reconfigure the parking lot (creating 55 uniform, per-code parking spaces), and to build an outdoor playground. While both will be used for the benefit of St. Peter's School and students, they'll also benefit the community. The lot will be open for special village events, and the playground will be open to residents.

•An area variance request from Herbert Richardson was approved, allowing the professor to construct a kitchen and Americans with Disabilities Act-compliant bathroom at 442 Center St. Richardson is expected to convert the former book depository into a restaurant. The property is located in between the former Brio Pizzeria and the Frontier House.

•The board deferred ruling on referrals for outdoor fenced patios at 425 Center St. (Carmelo's Coat of Arms) and 433 Center St. (Apple Granny Restaurant). The NCPB sent the requests back to the Village of Lewiston for municipal zoning determination.