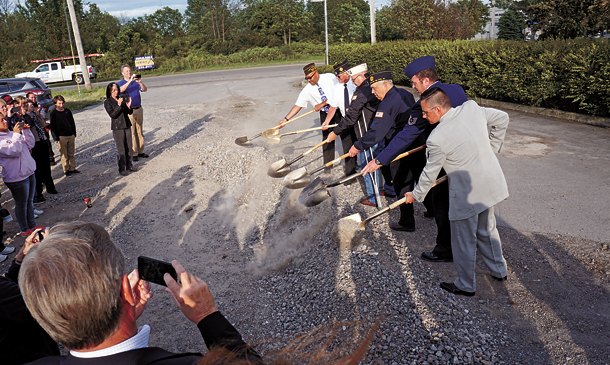 On the anniversary of Charles DeGlopper's death in combat during the D-Day invasion, Islanders joined in the heart of town to break ground on expansion of a memorial in his name.

At DeGlopper Park June 9, on the 72nd anniversary of DeGlopper's death in battle, members of the DeGlopper Memorial Expansion Committee held a ceremonial groundbreaking to both honor the memory of the Congressional Medal of Honor recipient and begin work on the expansion project.

Erik Anderson, president of the committee, thanked the volunteer members of the community who have worked for 14 months to conceive, fund and improve the existing memorial, a project that will transform the present park at the intersection of Grand Island Boulevard and Baseline Road.

Site Design Chairman Patrick Soos praised the team that has volunteered to expand the park, and who put in what he called hundreds of hours of research and design for the project.

Among the volunteers are veterans from the VFW, American Legion, and Island citizens "that wanted to make a difference," Soos said. The committee includes members of the Charles N. DeGlopper VFW Memorial Post No. 9249, Grand Island American Legion Post No. 1346, and Grand Island Moose Lodge No. 180.

"What a perfect day to be on Grand Island for an amazing event, an event that is really going to bring a world-class site right to the center of Grand Island," Soos said during the ceremony. He called the design a product of hours of research by the team that looked at similar memorials across the country for ideas.

"We brought the best of the best together and we were able to come up with an amazing design," Soos said.

An estimated $750,000 is needed for the work, which will expand the footprint of the memorial and add educational enhancements. The expansion of the DeGlopper Memorial site will honor Charles N. DeGlopper, as well as Grand Island residents, past, present, and future, who have served in the United States military.

Soos said a 7-foot bronze statue of DeGlopper will be the centerpiece of the new memorial. 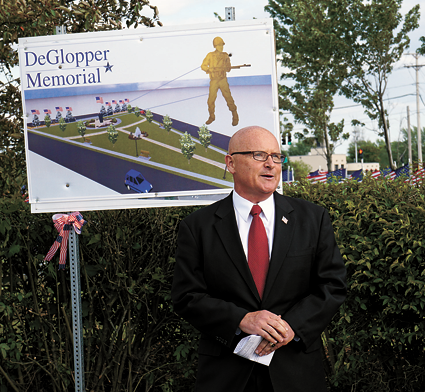