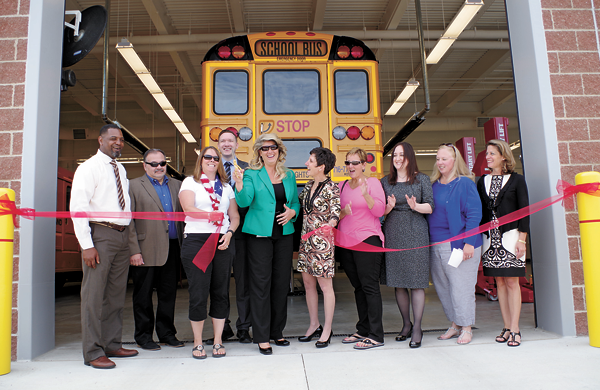 The phrase "state-of-the-art" was used multiple times to describe the new facility.

"This is our day. And what a year it's been," said Theresa Alizadeh, district transportation supervisor, during a ribbon-cutting ceremony attended by school and government officials, school board trustees, and district employees past and present, such as bus drivers, monitors and mechanics.

Alizadeh said the investment in the future of transportation on Grand Island "is a strong statement of our unending support of student safety."

Grand Island Superintendent of Schools Dr. Teresa Lawrence called the building a "one of a kind, envy of many, state-of-the-art transportation center."

"May this serve us for many, many, many years," she said.

"It's hard to believe that a mere 13 months ago we were here breaking ground," Lawrence remarked. The idea for a new facility stretched back many years. She praised the forward-thinking leadership of the district's Transportation Department - recently retired supervisor Jack Burns and Alizadeh - in making the center a reality.

"Good leaders create a vision. They articulate a vision, they passionately own the vision, and they relentlessly drive it to completion," Lawrence said. "What Jack Burns started, Theresa Alizadeh helped bring to fruition."

Lawrence noted the district's naming committee recommended, and the Board of Education approved, naming the facility the Jack Burns Transportation Center in honor and tribute to the 33-year district transportation director.

The new, modern building tells the community that the department is supported in the commitment to student safety.

"Student safety is our greatest goal, and our state-of-the-art facility with its technology enhancements will assist us in this goal each and every day," Alizadeh said.

The location of the facility, near the old facility, offers security for both employees and buses.

"Being in the center of town, providing us the visibility, is the safest location," Alizadeh said.

A new ring road leads to the facility from a Baseline Road entrance near St. Martin-in-the-Fields Episcopal Church. Alizadeh called the road an asset, because it moves the buses away from entrance near the U.S. Postal Service and Sidway entrances, "a major plus for the community." The ring road also affords extra parking at Sidway sporting events and defines the playing area adjacent to Sidway, she explained.

Sidway Elementary Principal Denise Dunbar emphasized the safety advantage of the new ring road that leads to the facility. The road intersects with Baseline Road on the north side of the Sidway property, close to St. Martin-in-the-Fields Episcopal Church.

"Before the ring road, we had all of the buses exiting out this one driveway by the post office, along with all of the parents who are picking up," Dunbar said. "In the years that I've been here, I've seen at least five accidents right at that place."

The volume of traffic coming from the intersection of Baseline Road and Grand Island Boulevard to the south caused lengthy wait times at the old exit from the Sidway parking lot, which was in close proximity to the post office lot. The logjam as buses left was a significant safety risk, Dunbar said, and the ring road has helped speed buses in and out.

"One year we had a little UP-K kiddo that was in an accident. So it was horrible," Dunbar said. "And then the buses would all get backed up in the back here of Sidway because only so many could pull out at a time. When you've got 16 buses exiting, they'd be idling outside the library, so we had to close the library windows."

A lot of similar school transportation facilities "don't have in-ground bays, and you've got two in-ground bays along with the portable lifts here that'll handle any size bus," Robinson said. "Between the hose reels, they've got every type of fluid, so they can change literally every one of their buses, service every one of them within these four bays. They've got a wash bay there at the end, a 5,000-square-foot parts and storage space, and then a separate office and dispatch center. Wi-Fi throughout the entire facility. New mechanical, electrical, plumbing equipment."

"The community should really be happy with what we put here," Robinson said. "The other thing is really, like Theresa said, that ring road moving traffic away from the elementary school down the road, and then having all the buses parked in a secure space, this is quite a feat."

The old transportation building, which will be the future home of the district's buildings and grounds staff, was too small for modern, larger buses, forcing mechanics to park buses bumper to bumper in the bay.

"Before, they were double-stacked, so you could put one in front of another, so if the one behind still isn't fixed, you're still waiting on that one to get fixed before you can do anything," Robinson explained.

Burns proposed a new building to then Assistant Superintendent of Schools for Finance Loraine Ingrasci several years ago.

"It was something they needed," Ingrasci said Tuesday. "What vehicles they have today, it wasn't accommodating. ... And they made do for many, many years when most school districts were doing something else."

Tim Blevins, chief mechanic in the department, said "We've been waiting for this moment for a long time." He called the building the best maintenance facility in New York state. He echoed Burns in saying the top focus in the department is safety.

Ingrasci recalled, "(Burns) made a case for safety, and if I have to say anything, just like Tim said, safety was always No. 1 with the entire transportation staff."

Grand Island voters approved the $6.3 million proposal to build the transportation facility by a 404-233 vote in a referendum held in December of 2012.

School Board Vice President Sue Marston said the capital project has brought many changes and upgrades to the district, some visible and some not so visible, but all important in their own right. She thanked the community for its support "and your never-ending commitment to our children's education."

"Lastly, and most importantly, I again express my gratitude to this community for the approval of the capital project," Lawrence said. "Again and again, I am reminded of the kindness of this community and also of their commitment and their value of a great education."

Lawrence said the transportation project is the second to last component of the capital project. Phases 1 and 2, renovations of buildings, are complete. Underbidding has allowed reinstatement of extra work into a phase 3.

Lawrence praised representatives of Cannon Design and Campus Construction Management for guidance, leadership, and trouble-shooting in shepherding the projects.

Grand Island Town Highway Superintendent JT Tomkins, who attended the ribbon-cutting with his deputy, Dick Crawford, said the Highway Department fleet will fuel up at the district pumps behind Sidway, and in return will drop the blade of a snowplow entrance and exit, clearing the snow and ice off the ring road as they drive to and from the pumps.

Tomkins said the district will add an as yet determined service charge per gallon, but the town will enjoy real savings.

"So it's going to be significantly cheaper than the pump price we pay now," Tomkins said. 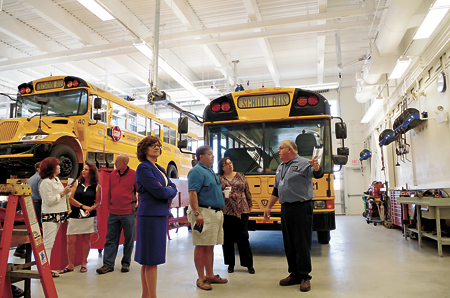