Grand Island business owner Crystal Harding said she loves the location of her 2-year-old business, calling it "homey," which is only natural considering the business is located in the middle of a residential neighborhood.

Harding, owner of Kiddos Korner preschool at 2728 Stony Point Road, on the corner at Bedell Road, celebrated a ribbon-cutting for her business Wednesday. Members of the Grand Island Chamber of Commerce, leaders of town government, friends and family celebrated the ribbon-cutting with Harding and her staff and students.

"I just can't tell you how supportive everybody has been on the Island with this whole process of getting the business going," Harding said. "It's been wonderful."

"It's good to see one business or one entity move out and to be able to find an adaptive re-use that works for the business that's moving in and works for the surrounding neighbors," chamber President Eric Fiebelkorn said, noting the building was sometimes vacant after its original owner, New Apostolic Church, left the Island. Harding's enterprise addresses the challenge of turning a church into a business that fits with the character of the rest of the neighborhood.

"And this is a fantastic fit. I live right up the road. This is high visibility and it's needed in the community," Fiebelkorn said. "Six years ago when I had my kids in day care, they were full here on the Island. So it's nice to have more options and not have to leave the Island for these kinds of services."

He called Harding and company a great owner and staff.

The school's homey atmosphere fits right into Harding's educational philosophy. The student to staff ratio is small, at 12:2, "which makes it really nice to establish those foundations and things necessary for the kids to make that smooth transition into kindergarten," Harding said. There are 36 Island kiddos in the program right now.

Harding has been working with families on the Island for seven years as a pediatric occupational therapist, primarily dealing with children in the 3-5 year age range, when she decided to go into business.

"I felt like there was a need for a program on the Island that really just targeted this age," Harding said. "I also like the aspect of the full day, so we are 9 to 3 here."

Harding said Kiddos Korner is the only preschool on the Island that both runs 9 a.m. to 3 p.m. and follows the Grand Island Central School District curriculum. Each classroom has masters-level certified teachers, she pointed out, and Kiddos Korner is the only preschool where the kiddos get a "special" class every day, such as art and music, just like they would in a school setting. Kiddos Korner has certified instructors that come in to teach art and music, and another instructor known on the Island, Kayla Fyfe from the Grand Island Dance Center, teaches kinder-dance with the children.

"We try to stay within the community," Harding said of the teachers.

Speaking of special, Kiddos Korner is probably the only preschool anywhere that had a Rainbow Air helicopter land in its parking lot, as happened this year.

Because her school is located just up Bedell Road from Grand Island Memorial Library, Harding said the children have the added opportunity to visit the library frequently.

"We walk over to the library every week to participate in the story hour there," she said, calling children's librarian Anne Slater "really accommodating" to the school.

The foundation of the business is the five people who work at Kiddos Korner, Harding said.

"I've just been really blessed finding staff that really share that passion for early childhood (education) and readiness for kindergarten," she said.

The ribbon-cutting marked a milestone for Harding and the business.

"We've had two wonderful, successful years in business and I just feel so excited for the future and what that holds for us," Harding said. 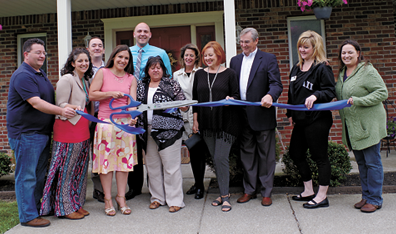