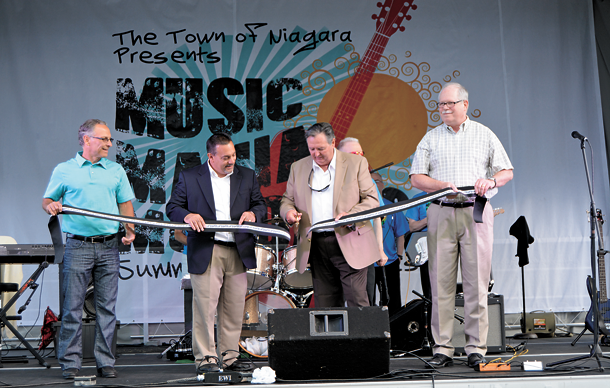 The Town of Niagara is about to unleash its biggest outdoor "Music Mania Mondays" concert series ever at Veterans Memorial Community Park.

"We have a heck of a lineup this summer," Town of Niagara Supervisor Lee S. Wallace said Monday at a media preview event. "We're really looking forward to it."

The series will run every Monday from June 13 to Aug. 15 and will include both national and international acts.

The first band to kick off the series is Hotel California, an Eagles tribute band. Hotel California band member Michael Dimoulas commented that, at outdoor concerts, like the one the band will play during the "Music Mania Mondays" series, "The people is what really gets us going. You know, seeing people's faces, the joy on their faces. For a lot of people, it brings back a lot of memories for them. You know, the songs have been around for so long."

Dimoulas added, "It's wonderful to see people come out and really enjoy themselves and get into the music."

On Sunday, July 3, the town's all-day event "Pride in the Park" (which will also coincide with the "Music Mania Mondays" series) will take place in celebration of Independence Day.

"We have bands all day long, along with a craft show, chicken barbecue and a culmination with fireworks," Wallace said.

A total of five bands will play throughout the day, including Strictly Hip, a Tragically Hip tribute band, which also plays an assortment of rock and country music.

Strictly Hip frontman Jeremy Hoyle said the band enjoys playing outdoor concerts because "They are accessible to everyone. You know, we're all family guys. Our kids can come to the show. And people who have been coming to the shows for 15 years, they can now share that music with their children and they can share it with their parents and their grandparents. It's a little all-encompassing and that's what we're all about is sharing music with audiences."

In fact, one of the main goals of the series was to offer an activity that could cater to a variety of residents, Wallace said.

"I look at recreation on a much broader basis," he said. "And in the past, all the Town of Niagara has really done, based on limited funds, is recreation for youth and maybe a few things for seniors. The concerts will attract a different clientele - people who normally wouldn't come to our park if they didn't have children playing in the baseball program, or kids playing in the soccer program. So, we want the residents to feel like there are things for everyone to do. So that's why we're always looking to try and expand what it is we offer."

To further develop the series, several new features have been added - the biggest being a new concert stage, which was revealed Monday.

"The stage will be used to enhance the Monday concerts, which have been growing in popularity, and we expect our best summer ever," Wallace said in a press release. "This is the finest collection of bands yet to play at our annual 'Music Mania Monday' free concert series and, while we had been renting an all-purpose stage from the City of Niagara Falls, this new Stageline stage is designed specifically for concerts with superior acoustics."

The new concert stage, paid for with funds received from the New York Power Authority, is stationed by the park's playground and features an open back, side wings and lighting equipment.

Since the stage is very intricate, a crew trained eight hours a day for three days to put it up and take it down.

"So we think we got our handle on it," Wallace said. "And it's a big undertaking, but we're really proud of what we've done here."

Besides bringing in the new stage, this summer's "Music Mania Mondays" series will now feature new food options. For example, Tim Hortons and Boss Man Barbecue food trucks will be on hand each concert.

Also taking place will be children's activities (including a bounce house) and 50/50 raffles for different charities and community organizations, including Barefoot Christian Community, the Niagara-Wheatfield Kiwanis Club and the Town of Niagara Business and Professional Association.

"I think, with our additions this year, we've reached the point where we are now going to be a full-blown concert atmosphere that people come to," Town of Niagara Recreation Director Amanda Haseley said.

The family-focused series has "evolved" over time, Wallace said, adding the first concerts were held only a year or two after the park opened.

"We started out real small," Wallace said. "We kept it very low-key."

Now, in only the past two years, the series has been given donations from sponsors, which have helped it grow.

"In order to increase the caliber of the entertainment and to improve what we were doing, we needed the sponsors," Wallace said.

"We had an overwhelming number," Haseley said. "Everybody who sponsored last year came back, plus more. So that's amazing."

The two major sponsors of the series are Republic Services Allied Waste Industries and Niagara Lawn and Garden.

Overall, Wallace said the concerts serve as an "evening out for free, basically. We don't charge to park, we don't charge to get in. Prices for the concessions are reasonable. The entertainment is top-notch. And you're in a safe environment. (There's) no better way to spend a nice summer night."