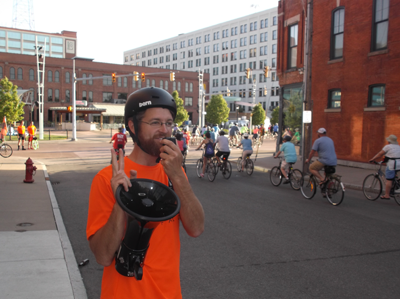 Seamus Gallivan giving instructions to the riders as they pass him in Larkinville.

Held each Monday, these free rides are open to everyone of all ages and all skill levels who are riding every type of bicycle.

The Memorial Day ride began at 6:30 in front of America's largest inland Naval Park, the Buffalo and Erie County Naval & Military Park at Canalside. The riders returned there for a party on the fantail of the USS Little Rock nearly two hours later featuring a live band, craft beer and fellowship. Everyone was amazed to watch a beautiful sunset, ending a huge weekend of activities and visitors to the Naval Park, Canalside, Ohio Street, RiverWorks and the Outer Harbor.

"This is the Buffalo I envisioned, and this is what I hoped the waterfront would become. So, no, I am not surprised to see this. I am happy," says Bert Dunn Sr., a retired, 30-year Buffalo firefighter, and the founder and owner of Bert's Bikes. Each week, his team works out of its mobile shop, filling tires and doing minor repairs at no cost.

Slow Roll Buffalo was founded in Detroit and now is global and in its second season here. One of the founders is Seamus Gallivan, a young, creative, energetic entrepreneur who returned to Buffalo after working for the professional baseball team in Corpus Christi, Texas. Wearing his red Slow Roll staff shirt and giving instructions through an amplified megaphone while riding the route, he credits the many volunteers who work diligently each Monday to ensure the riders' safety as they slowly lead them from a different starting point through neighborhoods of the city most riders never knew existed.

On Monday, we made our way to Clinton Street, heading east before turning south, through Larkinville and into South Buffalo, where we went down South Park Avenue and past the massive Solar City project. We made our way to the Outer Harbor before exiting at Ohio Street and going past the impressive new apartment buildings and homes being constructed there, and its new, beautiful park.

Along the way, many residents would cheer the riders while Slow Roll volunteers contained traffic along with several members of the Buffalo Police Traffic Department. A huge thanks goes out to Mayor Byron Brown, a strong advocate of bicycling in the city, and to Police Commissioner Dan Derenda.

"This is only my second ride, but I love it and I will be back. What a unique and wonderful way to see parts of our city I would never see and getting some exercise," says Melinda Sanderson, the upstate director of mentoring for the New York State Mentoring Program, and a former competitive cyclist, downhill skier and triathlete. 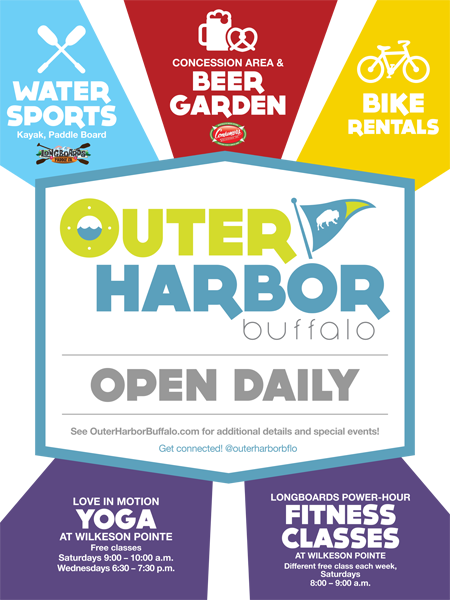 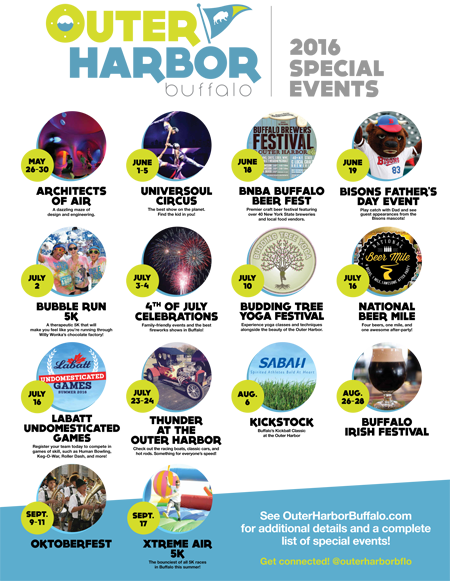 Canalside, a historic redevelopment district on the site that was once the western terminus of the Erie Canal, is the jewel in the crown of our Queen City, as it boasts over $300 million in public and private development since the old Memorial Auditorium came down in 2008.

Memorial Day weekend is the official start of the many activities offered at Canalside and now on the Outer Harbor. The summer-like weather we have been enjoying is bringing big crowds to our waterfront. That momentum will continue through Labor Day and beyond. Tom Dee, president of the Erie Canal Harbor Development Corp., predicts more than 2 million guests will visit the waterfront this summer.

ECHDC held a press conference at Canalside on May 20 to announce the upgrade and expansion of the Central Wharf and the completion of the $2.2 million boardwalk project that will enhance the recreational use of the Buffalo River and improves the trail system along the waterfront.

The extremely popular beach area, sponsored by EduKids Inc., has also been expanded by 30 percent with added umbrellas in the sand area and landscaping designed to complement the play area.

"The new section of the wharf improves the flow for walkers and bicyclists looking to head to the Outer Harbor," ECHDC Chair Robert Gioia explains. "The pieces of the puzzle are coming together and creating the vibrant destination that is Gov. (Andrew) Cuomo's vision for the Buffalo waterfront."

Four days earlier, there was a press conference at Wilkeson Pointe on the Outer Harbor, where ECHDC and the newly created Outer Harbor Management Group (OHMG) announced an exciting season of activities, site amenities and public-access programming.

OHMG is an event management team of Be Our Guest LTD, a subsidiary of Rich Products Corp., the privately held global frozen food manufacturer that also owns three professional baseball teams, including the Buffalo Bisons. The OHMC general manager is Matt LaSota, and his hard-working assistant is Beth Potozniak. They both spent years managing events for the Bisons, so they come with great experience in wowing guests. With the Richs' support, they will dazzle the audiences with unique events.

OHMG began Memorial Day weekend in grand fashion with a massive Arboria luminarium, which was a maze of massive 550-square-foot inflatable plastic sculptures, and resembled a classy bounce house.

"Bob and Mindy Rich had a vision for the waterfront when they opened the downtown ballpark in 1988," says Jonathan A. Dandes, president of Rich Baseball Operations. "We are committed to this waterfront and to this city, and we are excited about what will occur here this summer."

"Our waterfront has evolved from one Western New Yorkers cringe at to one we now crave," he explains. "Just a few short years ago the site of the new wharf had no visitors and, last year, there were 1 million guests there. Wilkeson Pointe is where they stored the ice boom. Increased public demand is driving these increased activities and expanded amenities."

For information on daily schedules of activities, visit www.eriecanalharbor.com,www.canalsidebuffalo.com and www.outerharborbuffalo.com.