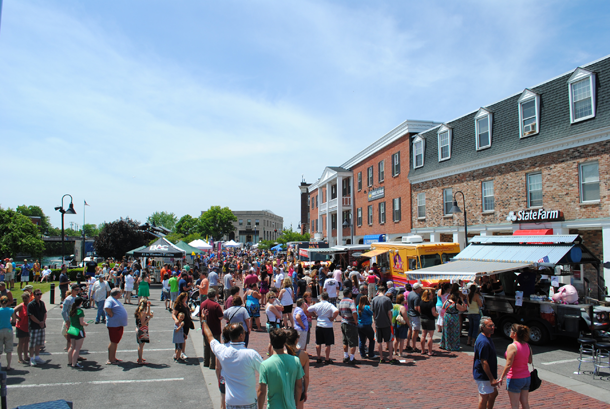 Locals gather at last year's Taste of the Tonawandas on Sweeney Street in North Tonawanda.

Taste of the Tonawandas returns

The annual Taste of the Tonawandas will take place from noon to 7 p.m. Sunday, June 5, on Sweeney Street between Main and Webster streets in North Tonawanda.

Restaurants and food trucks from the City of North Tonawanda, as well as those from the City and Town of Tonawanda and Niagara Falls Boulevard, will set up shop alongside the Erie Canal.

Event-goers can choose to sample a variety of food and beverage options, ranging from appetizers to entrees, sides, desserts and beverages.

"It entails a little bit of everything," said Linda Foels, president of Tonawandas Gateway Harbor Inc. and organizer of the Taste of the Tonawandas event. "Pretty much anything you want - you're probably going to find it there to eat."

She added, "We have everything from hot dogs to seafood."

This year, nearly 30 vendors have signed up to partake in the event, which Foels said is twice as many as last year.

"The (vendors) generally do their specialty," Foels said. "We do People's Choice Awards in several categories. The people actually vote on who they think is the best in each category."

Joe Tomasino of North Tonawanda, owner of J&L BLVD BBQ, has been a vendor in the Taste of the Tonawandas for six years.

"Basically, we go back to events because we enjoy them and we enjoy cooking the food and getting the food out and seeing the people," said J&L BLVD BBQ spokesperson Lori Joy. "That's with every event we do." The business has also tried the Taste of Buffalo, which was a great experience, as well, "Because we met so many people and served so many different people," Joy said.

J&L BLVD BBQ not only serves its dishes out of its North Tonawanda brick and motor location at 97 Erie Ave., it also runs its own food truck, which will be at the Taste of the Tonawandas offering one of the restaurant's specialties: pulled pork in a chipotle barbecue sauce.

On the side, event-goers can taste the restaurant's signature "Frenchy Fries," which, Joy said, are completely "fresh cut."

"They start as a whole potato and then, about five minutes later, they're french fries," she said. They're fresh cut right on the truck."

She added, a "special rub," containing about eight or nine spices, is then used to top off the fries, making them official "Frenchy Fries."

Besides a slew of Perry's Ice Cream, gelato and sorbet, new Canalside Creamery owner Dorothea Dunatov will offer something brand-new she has brought to the table: wine ice cream from Mercer's Dairy.

"It's wine-infused ice cream," Dunatov said. "It's not flavored. It's the real thing. And you have to be 21 (years old) to buy it. ... It's something not many people know about." Three flavors, including a chocolate cabernet, red raspberry chardonnay and cherry merlot, will be offered Sunday.

Dunatov took over the creamery at 82 Webster St. last July, making this year's Taste of the Tonawandas her first as the owner.

Overall, Dunatov said she looks forward to "reaching out and meeting the people of the community and letting them know who I am."

In addition to local food, Foels said there will be a variety of craft beer tastings at the event, which has grown from past years.

"So we are expanded and we're improved," Foels said.

She said Tonawandas Gateway Harbor has "actually revived (the event)," over the past eight years, in that the Tonawandas used to hold the event approximately 30 years ago. "And after so many years, for some reason, it just stopped. And then Gateway Corporation picked it up and restarted it."

Despite growth and additions to the event this year, Foels said, it's location still offers "a little bit more intimate setting, I think, than a lot of the bigger venues, because you can sit right at the Erie Canal."

All food during the event can be purchased using tickets, which will be sold, on site, at the Taste of the Tonawandas booth stationed in the center of the venue. Tickets will be sold for 50 cents each and the price of each food item will range from one to a maximum of 10 tickets.

Also, tickets can be refunded if left unused during the event.

"As long as we're open, if you buy too many tickets, come to our tent. We'll give you a refund," Foels said.

For youth, the event will offer children's entertainment from 2-6 p.m., something that was available last year, but will be expanded on this year. On hand will be a professional "face painter straight from Disney World," Foels said. A balloon animal artist will be there, and characters in costume will roam through the crowd.

Also, live music will be held during the event. Local band NY2LA will take the stage from 12:30-3 p.m. The band plays an assortment of classic and contemporary rock tunes.

Later on, from 3:30-6 p.m., 2LeftBoots, another local band, but with a country rock flare, will perform.

The event will run rain or shine. For more information, visit www.tonawandasgatewayharbor.com.