A Whitehaven Road homeowner is honoring those who serve as he helps light the way home for his fellow Island residents.

Gary Schultz of 3161 Whitehaven Road, next to Big Six Marina, has turned a dead tree on the front of his property into a carved lighthouse. The work of art was done by chainsaw wood carver Clair Talbot of Lockport, who has done similar carvings on the Island, such a carvings of bears on West River Road. The metal emblems on the lighthouse by Steel Crazy Iron Art of Tonawanda Street in Buffalo honor police, fire, EMS, and the five branches of the armed services. The words on a metal dog tag on the lighthouse sum up Schultz's intent: "In honor of those that served, past, present and future."

Schultz has lived on Grand Island with his wife, Pat, for 5 years. When he lost the tree to a disease, Schultz, a retired Buffalo Fire Department and Air Force Fire veteran, thought at first of turning the 7-foot stump into a street fire box, but then the light went on in his mind to honor others instead.

The lighthouse is highly visible, now at 9 feet tall with the light on it, and sits on top of a 3-foot hill. Schultz said he's received a lot of positive feedback.

"People around here know and are always commenting on it," Schultz said. "Even the school buses were slowing down."

Don't be afraid to cruise by and take a look, Schultz said. 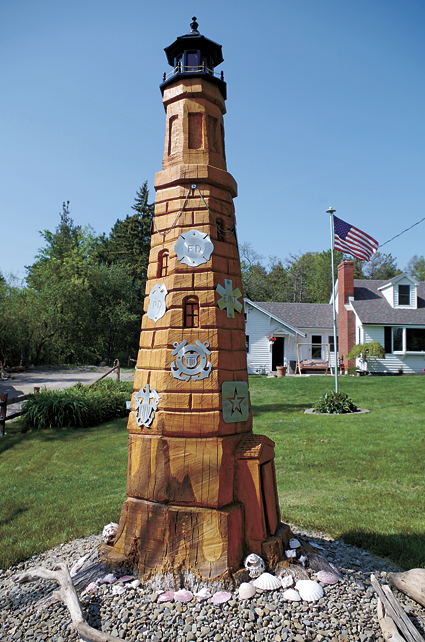