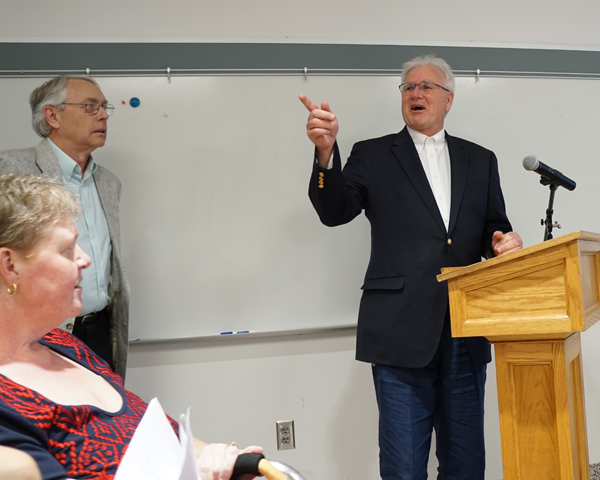 Reg Schopp, chairman of the district's naming committee, made the formal announcement that the building will be named the Jack Burns Transportation Center.

Burns served as transportation director for more than 30 years. He was on hand for the announcement at the meeting, held in the Professional Development Room of Grand Island High School.

The district's Transportation Department will take over the new building, located next to its current offices behind Sidway Elementary School, in the first week of June.

Upon the announcement, the audience in the meeting stood to applaud the longtime director. Burns spoke and admitted the honor was "an exciting event." Pointing to his many friends in the audience for the announcement, Burns said, "If it wasn't for all those people over there and many, many, many more, I wouldn't be standing here today, and this is a direct result of everybody working together in transportation."

He admitted retirement's been a little hard. "Not only do you leave your job, but you leave a lot of your friends and things that you do on a regular basis there," he said.

"This is really an honor," Burns said. "I couldn't be more proud."

Board trustee Rich D'Agostino said he has known Burns for nearly 20 years and called him a "very kind, compassionate, caring and patient man. ... And I will say, Jack, you deserve this honor. Thank you very much for all you've done."

In presenting the award, Swagler read a letter that praised Cardone for demonstrating "her dedication and sensitivity to children of Grand Island on a daily basis by making decisions based on the best interests of the children. In and out of school, Cheryl takes the time to make the kids feel special with kind gestures of conversation, smiles and kind words of encouragement. Her daily commitment and contribution to the welfare of our children should be commended."

•Vaughn Maracle of Campus Construction Management briefed the board on the capital project. Phases 1 (high school/middle school work) and 2 (work across the elementary schools) are done. Reports to the State Education Department will be filed in a month.

He said three separate projects are ongoing, including phase 3 of the capital project. All contracts are in place as the district gears up for "a last summer of construction," he said.

Included is the final layout for a storage facility in the back of the Ransom Road property.

A move date to take over the aforementioned transportation facility is anywhere from June 1-3. A ribbon-cutting ceremony for the facility is set for June 14 at 10 a.m.

•The Board of Education approved the tenure appointments of eligible probationary administrative and instructional staff.