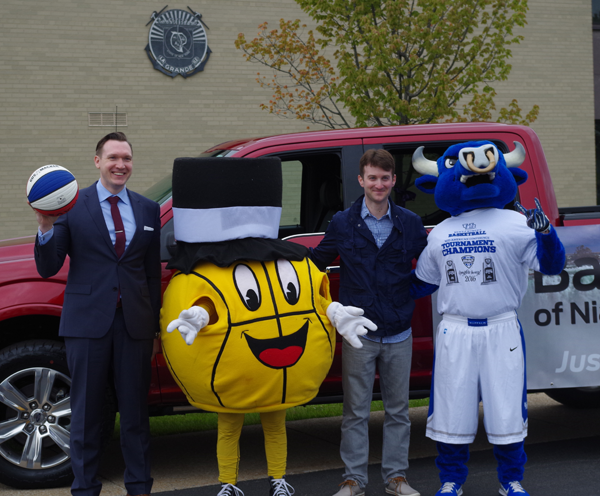 Two weeks away from tipoff of the 2016 Gus Macker 3-on-3 Basketball Tournament, the registration deadline to play in the tourney has been extended a week.

At a press conference Tuesday outside Grand Island Town Hall, Corey McGowan, local organizer of the Gus Macker, said the registration deadline has been moved to May 23. So far, there are nearly 300 teams signed up in all age groups; 278 teams took part in the Macker last year, the first time it was held on the Island, on Grand Island Boulevard between Whitehaven and Baseline roads.

"Certainly last year was a learning experience, so we kind of built a template in terms of what we need to expect from last year," McGowan said. "It was our first year. But things have been smooth this year. Everyone in the area is comfortable with the tournament."

Last year, the approval for the games, which had never been held on Grand Island before, stalled at the Town Hall level before it was eventually given the green light. The games went off without incident.

McGowan called the difference between 2015 and 2016 "night and day versus how smooth things have gone this year."

More players and teams are expected this year because of the ongoing registration. Last year, with doubts whether the tournament would gain Town Board approval necessary to take place, registration was halted before finally resuming.

"Traditionally, the tournament's always been in June, but last year we got a late start and had to push it to August. Now that we're in June, guys aren't playing football, people aren't away at school, so that helps, certainly, with our numbers," McGowan said.

The town government approved this year's tourney weeks ago after McGowan satisfied all their concerns. The tournament will take place June 4 and 5, but a special "Grand Island night" will take place Friday, June 3.

At Tuesday's press conference attended by television and radio stations, the Dispatch and online news outlets, Town Supervisor Nathan McMurray said McGowan "has done a fantastic job" in lining up security and health and medical services for the event.

McGowan said the event will be much like a family-friendly, family-oriented festival, with a giant kid zone in the Town Commons.

Other events at this year's Macker:

•The Special Olympics will have its own tournament within the Macker.

•A mascot game, will pit mascots Victor E. Bull and Gus Macker, who were present at the press conference Tuesday morning, Monty the Purple Eagle from Niagara University, Sabretooth, the Golden Griffin and the Grand Island Viking.

•Celebrities from 97 Rock and WKBW-TV Channel 7 (Joe Buscaglia, Aaron Mentkowski, and Jeff Russo) are among those slated to play. McMurray, his assistant Cyndy Montana (according to McMurray, a Canadian university all-star), and a hack from the local weekly newspaper will team up to play WKBW.

"We're going to give Channel 7 a run for their money," McMurray said.