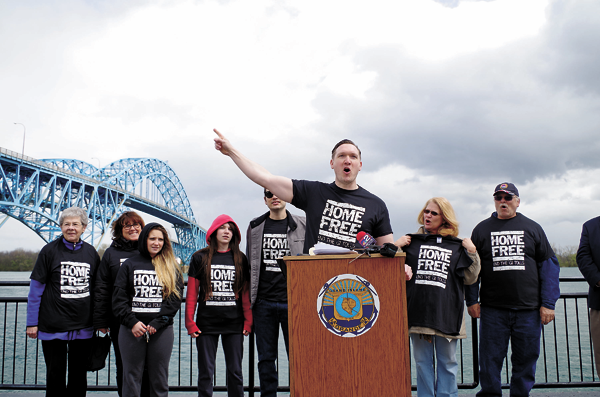 Town Supervisor Nathan McMurray points in the direction of the toll booths at the South Grand Island Bridge as he demands their removal during a rally Sunday at Fisherman's Landing. (Photo by Larry Austin)

Vowing to change the status quo and wearing a T-shirt that said "HOME FREE END THE GI TOLLS," Town Supervisor Nathan McMurray called for removal of the Grand Island bridge tolls at a rally Sunday.

At an event billed as a press conference, but feeling more like a campaign rally, held Sunday at Fisherman's Landing, McMurray echoed President Ronald Reagan's call to Mikhail Gorbachev to tear down the Berlin Wall, as he pointed at the South Grand Island Bridge toll booths and said, "Mr. Cuomo, tear down these tolls."

A few dozen supporters and members of the media attended the event despite a chill in the air. Bev Kinney, past Grand Island Chamber of Commerce president and current town councilwoman, hosted the event and began by saying, "Over a decade ago, we were fighting the tolls then along with Carl Paladino, who was successful in getting the Breckenridge tolls removed. We weren't so successful, but we've come full circle and we have the same problems today that existed then: pollution, traffic delays, as well as many issues for our residents and our business community."

She introduced Assemblyman John Ceretto, who said McMurray reached out to him for legislation to remove the tolls, and said he would "carry the torch" for Islanders on the issue and take their message to Albany.

Ceretto called the tolls "a commitment that the state made a long time ago, that when these bridges were paid for, those tolls would go away. I'm hoping that, carrying the torch this time, that we're successful. Let's stay together as a community, let's stay together with our elected officials."

"So we're paying for these roads three times over," Thompson said. "And it's about time that the New York Legislature started waking up to the fact that living in New York state is no longer affordable."

Thompson called for removing control of the 190 from the NYSTA and giving it to the DOT. He blamed the liberals downstate who pay $6 to $10 to cross a bridge, for blocking toll removal legislation.

Thompson applauded the Grand Island Town Board for "reigniting" the toll issue. He praised the new members of the Town Board who want to get rid of these tolls, because "for over 20 years that I've been fighting this we have not had a government that was in favor of eliminating the Grand Island tolls."

McMurray called the bridges and association traffic jams a "blockade" that separates the northtowns and southtowns and hurts the whole region. "It's not just about Grand Island," he said of the issue.

McMurray said the 1929 enabling legislation that paved the way for bridge construction says the tolls should be kept as low as possible for building the bridges and their maintenance. McMurray said, "We have no accurate accounting of how that money's been spent. For 80 years, we have no idea where the money's gone. We do know that it's been very profitable. These tolls are about $20 million a year, according to the Thruway Authority's own estimates."

"That's 3 percent of their total revenue," he said, calling the tolls "a profit source" that goes beyond the enabling legislation and pays for "who knows what else."

"I have a saying," McMurray said. "Either you rip 'em up, or you start payin' up, because Grand Island should get a percentage of that money if the tolls stay."

He pushed for electronic tolls that exist in other areas. "But we still have people with their hand out in a cloud of pollution collecting a dollar bill," he said. "Does that make sense?"

McMurray thanked "the people getting behind this," such as Erie County Clerk Chris Jacobs, who is running for State Senate. Jacobs voiced his support for the removal of the tolls on the Grand Island Bridges and said in a press release issued last week that if elected to the Senate he will "make the toll removal a legislative priority."

"This toll removal legislation has languished for too long in Albany, it is time to lift this burden off the backs of our residents once and for all," said Jacobs. He commended McMurray for reviving community discussion on this issue.

"The Grand Island tolls are patently unfair to the residents of Grand Island, impose an unfair burden on all who cross into Grand Island and stymie economic growth," said Jacobs. Jacobs's also mentioned the idling trucks at the tolls cause pollution problems and increased stress on the bridge structure.

Currently, the legislation (S.7555/A.9863) is pending in both the Senate and Assembly Transportation Committees.

"Support is building for this. It makes sense for Western New York," McMurray said.