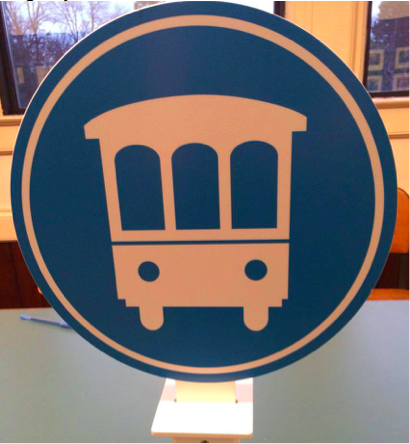 Pictured is a trolley sign, which will be located at all of the pickup and drop-off locations on the route.

Thursday night's Youngstown Village Board meeting was dedicated almost entirely to making improvements throughout the village.

From discussing the installation of reflective camera surveillance and boat docking signs at the waterfront to recognizing the beautification committee's flower boxes and new bushes, the board continued to make efforts to positively develop the area.

•Unfortunately, some of the improvements that need to be made in the village are a result of illegal activity, including trespassing and the destruction of private property.

"Securing abandoned properties. ... We've got a number of them around here, and the kids have been kicking in the doors getting in there," Code Enforcement Officer John Stevens said. "The concern is the kids."

Stevens has secured multiple homes over the past few months, including two residences Thursday night before the meeting.

He requested the support of the board because, technically, he is walking on private property and altering it in an effort to improve its current state. The board agreed.

"If it's a health or safety issue, we have a responsibility to do this," Village Attorney Tom Casserta said.

Police Chief Michael Schuey and his patrol officers have been working with Stevens by checking in on some of the empty homes in the area.

"We don't want kids getting in there, doing what they shouldn't be doing and getting hurt," Mayor Raleigh Reynolds said.

Stevens explained some of these buildings are not even safe enough for firefighters to enter into, but now they have to, to make sure there aren't kids inside.

Trespassing on abandoned property is also how a recent fire started.

•There was an update provided by Reynolds on the new trolleys that will be running from stops in the village, including Fort Niagara and near the Dory on Main Street. Starting at 9 a.m. May 26, the trolleys will travel in Youngstown and to other locations throughout Lewiston and Niagara Falls.

The GPS tracking systems on board the busses are expected to be installed soon, while the vehicles were graphically wrapped and decked out with cushions as of Thursday.

•The six flags located throughout the village will be flown at half-staff from dawn to dusk Sunday to honor Peace Officer's Memorial Day, part of Police Week.

•It was also noted the Peace Garden and Youngstown Garden Clubs are in search of new members, as well as volunteers, to help improve the south waterfront park. The park is located between the Youngstown Yacht Club and Niagara Jet Adventures.

All are invited to come down to the waterfront park and volunteer by planting flowers starting at 9 a.m. May 19 and 20.

•The next Youngstown Village Board Meeting will be held at 7 p.m. Thursday, May 26.