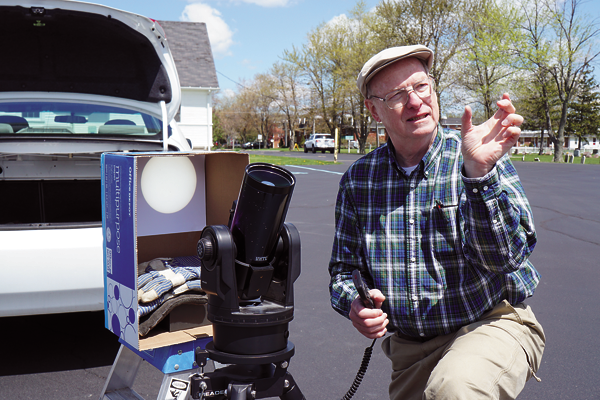 As the pastor emeritus of Trinity United Methodist Church, it's entirely natural for Paul Robinson to be looking toward the heavens.

Monday, though, rather than looking for divine guidance and inspiration, Robinson was watching Mercury transit the sun, an event that happens just 14 times a century.

A transit is defined as the passage of a planet across the sun's bright disk and is considered a rare astronomical event. An avid astronomer, Robinson set up his telescope in the Trinity parking lot, away from all the trees that might block his view of the planet travel between Earth and the sun in a path he called inferior conjunction. He began watching at 11 a.m. The event started at 7:14 a.m. and stopped at 2:41 p.m.

He worried a cloudy day would block the view, but when the weather turned bright and beautiful, he decided he had to watch. After all, it won't happen again until November in 2019, Robinson said.

"I said, I bet I'm the only one on Grand Island doing this,' " Robinson said. He watched Mercury transit the sun with the telescope he received as a gift from the congregation when he retired in 2005. 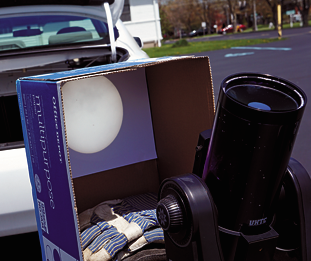 All over the world, scientists were likewise watching Mercury, Robinson said. On the Island, Robinson was joined by another scientist, Rev. Dr. Sung Ho Lee, Trinity's current pastor. Robinson's wife, Ellie, and his friend Fred Claus also stopped by to watch.

One doesn't actually watch Mercury transit, the sun being too bright. Instead, Robinson pointed the telescope at the sun, and focused the sun's powerful rays onto a white sheet of paper, projecting the light through the viewfinder. Mercury, appearing as a small dot on the paper and moved left to right on the sheet.

"It's just a nice diversion from politics and other things," Robinson said of the event.

Robinson has loved astronomy from a very young age.

"Ever since my grandfather took me to the roof of their apartment in Hackensack, New Jersey, and showed me Orion. He said, 'There's the old Irishman,'" Robinson said.

His grandfather gave him a book to help him. "And ever since then I've been hooked, totally hooked." 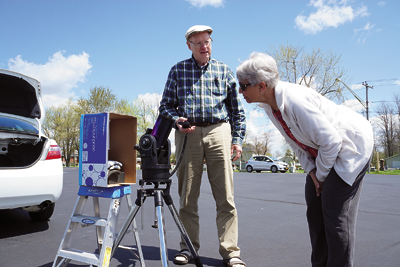