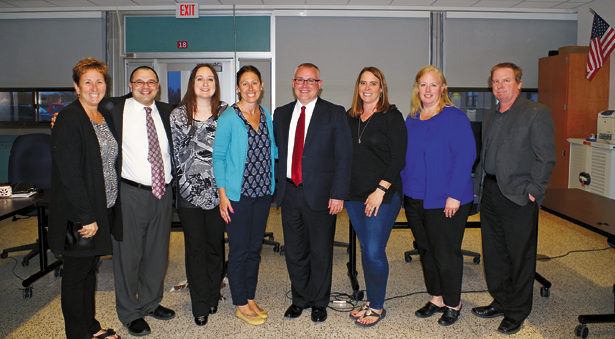 The Grand Island Board of Education has appointed Dr. Brian Graham as its next superintendent of schools.

Graham was appointed by a 7-0 vote Tuesday night during a meeting in the Grand Island High School Professional Development Room.

In thanking the board and the public after his approval, Graham said, "I can't tell you how thrilled and excited I am to be a part of this great school district."

"It's a whirlwind of emotions today for me and my family," Graham said. "Besides being excited and thrilled, I'm humbled and honored to be here."

He introduced the board at the meeting to his wife Donna, daughter Maura, and son Sean. He also has adult children, sons Liam and Connor.

Calling Grand Island a championship district, Graham told board members after his unanimous approval, "I really believe that this is going to be a destination school district, where people want to be on Grand Island."

Graham is assistant superintendent of pupil services in the West Seneca Central School District, a position he has held for three years. He will replace Dr. Teresa Lawrence when her contract expires June 30.

Before moving into administration, he was a special education teacher in the classroom for 16 years: seven years at Heritage Centers, two years at Erie 1 BOCES, and seven years at Alden Central Schools. He has also spent many years coaching soccer.

He has served as an adjunct professor at Daemen College. He earned his doctorate in educational leadership from D'Youville College and his master's degree in special education from Buffalo State College.

Graham said he plans to "hit the ground running" when he starts July 1. His goal at first is "listening to people and getting to know the culture and what people value and what people are excited about."

"We'll get together with people and start trying to define what it means to be a championship school district," he said.

He's already had an opportunity to meet many of the constituents in the district. His interview process included a lengthy day on the Island.

One theme among all the groups revealed itself during the 13-hours, he said.

"I really believe that in every group, everybody is craving the idea of moving student achievement just a little further toward that championship status," he said.

The 8 p.m. Tuesday meeting was announced Monday and Graham's approval was the only item on the agenda. Current Superintendent Dr. Teresa Lawrence, whose contract was not renewed by the board, was not in attendance.