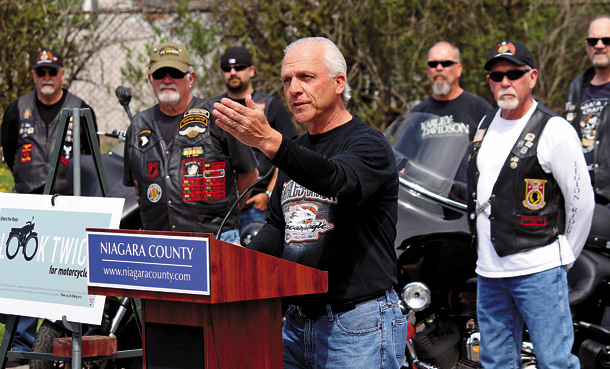 Jastrzemski held what he hopes will be his first annual motorcycle safety rally at the North Tonawanda Department of Motor Vehicles office, announcing that motorcyclists with concerns about safety and other questions would be a priority at his DMV sites.

"We've found that most motorcyclists are fully aware that there are dangers associated with riding, and work to mitigate those dangers," Jastrzemski said. "Since May is the national Motorcycle Safety Awareness Month, and also the time of year a lot of our motorcyclists put their bikes back on the road, we thought it would be prudent to remind the people in the sedans and SUVs that they have steel and plastic and airbags between themselves and the pavement, and bikers don't."

Shown is one of the posters being displayed in all three Niagara County Department of Motor Vehicles sites to encourage motorcyclists to ask for information on safety as part of Niagara County Clerk Joseph Jastrzemski's campaign.

At the rally, Jastrzemski spoke to the crowd of motorists, supporters and Niagara County officials about the importance of wearing a helmet when riding.

"The federal government estimates that, per mile traveled, the number of deaths on motorcycles is over 26 times the numbers in cars," he said.

Garrow said any lighting from the parking areas will have to be "dark sky" or "down lighting. So there's not going to be this full-sky illumination. It will be... from the light poles down."

He also said there will be dimmed lighting, or none at all, during the night after activities commence.

Besides focusing on the impact of the site once completed, the Planning Board set guidelines to affect the actual construction process of creating the facility.

"We forced them to keep construction vehicles to a minimum impact to the community," Garrow said. "Right now there's a bus station in the mall (near Sears) that's not being currently used. And the access road, right now, has concrete barriers. They'll have to move those concrete barriers and they'll use that access road instead of going down (Plaza Drive)," Garrow said. "So, instead of going down entirely behind the mall, in front of all those apartment buildings and (Eye Care & Vision Associates), they're going to pull up into that bus access route."

Although the Planning Board has reviewed all these factors relating to the site plan, "Before we can conclude on the Planning Board approval, there's also the engineering that has to be completed," Garrow said. "Now that was not a simple thing. That was several pages long."

Timothy J. Zuber of Wendel Duchscherer Architects and Engineers said the main item on this list includes a review of drainage. New York state requires a state stormwater permit for a project this size, which has several different requirements.

"(If) you take a (grassy) area and put a dome on top of it, there's more runoff," Zuber said. "So, we have to make sure we're not going to flood anybody that's downstream of this. It's got to be detained and then slowly released.

"And then the state permit also requires a water quality treatment. They also want you to take that stormwater that runs off (and) do something to help make it better than it is."

Zuber said one way of doing this is to try and reduce the runoff in parking lots with cars. Basically, any of the residue, "runs right off and into the waterways. So when (the state has) a project like this they ... require this component of water quality treatment."

So far, the applicants have provided Wendel with a stormwater pollution prevention plan. After reviewing it, Zuber said there are some aspects that need to be revisited and changed.

"So they are basically back, refining their drawings and their stormwater management approach," he said.

Zuber added, because the Planning Board gave a conditional approval on engineering review, the project applicants do not have to come back to another meeting. However, they will need engineering approval before moving forward on the process.

Zuber said Planning Board approval will depend on how quickly the applicants can obtain necessary documentation.

"So, basically, if they came in with revised plans and stormwater report to me tomorrow ... and found out it was all perfect, as soon as I write the letter, they could go and get a building permit," Zuber said. "But, if they submit me something two months from now and I review it and there's still issues. ... It's not until we can write our final recommendation of approval letter that they could then go and get their building permit."