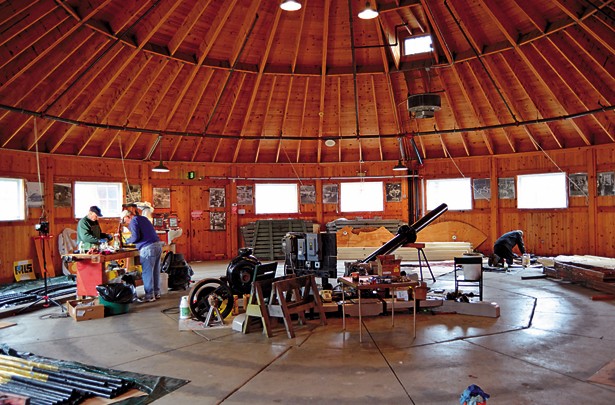 Shown is the room in the museum where the carousel will be reassembled. (Photo by Lauren Zaepfel)

North Tonawanda's Herschell Carrousel Factory Museum has officially raised more than $20,000, which is half the funding needed to repair and reassemble its main attraction - its 100-year-old carousel.

"Unfortunately, over the winter we had a major part on the carousel crack," said Megan Hahin, education director at the Herschell Carrousel Factory Museum. "It's called the main hub and it's, kind of, the part that everything else jets out of at the top of the carousel. So, we can't safely operate it again until we get a new part cast. And that's going to cost roughly $40,000."

That price tag also includes having a professional visit the museum to reassemble the carousel and then make sure it is balanced properly and running smooth.

To cover the cost, the museum started a GiveGab campaign and shared a press release with the media that requested donations from the community for the cause.

Each donation falls under a different "level" of donation during the campaign, Hahin said, and each level equates to a prize offered from the museum. For example, if a donor gave $10, he would receive two free tokens to ride the carousel when it's back up and running. Other gifts include family passes and membership, depending on the amount donated.

"We started (the campaign) about a month ago," Hahin said. "We've gotten a really great response from the community in that people are willing to contribute and chip in. And they've even written really nice notes to us about it, telling us how their family would bring them there as a kid or they bring their kids there."

The GiveGab campaign will run for 49 more days. Donations are also accepted via check.

"We get checks from people (and) I don't recognize their names," said Rae Proefrock, director of the Herschell Carrousel Factory Museum. "You know, it's the general public who care in making sure the carousel is back and running. And it's very exciting for us."

Hahin said she hopes the carousel will be running by the beginning of June. "It's really important that we get the carousel back up," she said. "We're going to be celebrating the 100th anniversary of the carousel July 16 and 17. So it would be a pretty sad celebration if we don't have the carousel for that."

If campaign donations exceed the $40,000 needed to repair the carousel, Hahin said the museum will place the funds in a First Niagara Bank account to pay for any future repairs of the vintage carousel or museum attractions. Currently, the motor is broken on the museum's kiddie carousel.

Although carousel rides are temporarily unavailable, the museum's outdoor kiddy land park is open on weekends. It features rides for children. In addition, visitors are welcome to tour through the museum and participate in activities and events.

The museum is currently open from noon to 4 p.m. Wednesday through Sunday.

To donate to the carousel campaign, visit www.givegab.com/nonprofits/herschell-carrousel-factory-museum/campaigns/help-us-restore-our-carrousel or mail a check to the museum at 180 Thompson St., North Tonawanda, 14120. 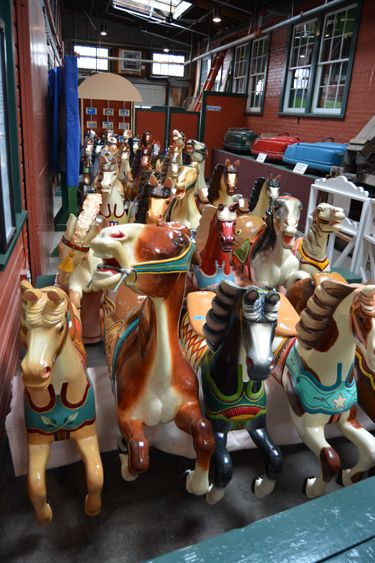 Shown are horses from the disassembled 100-year-old carrousel. (Photo by Lauren Zaepfel)